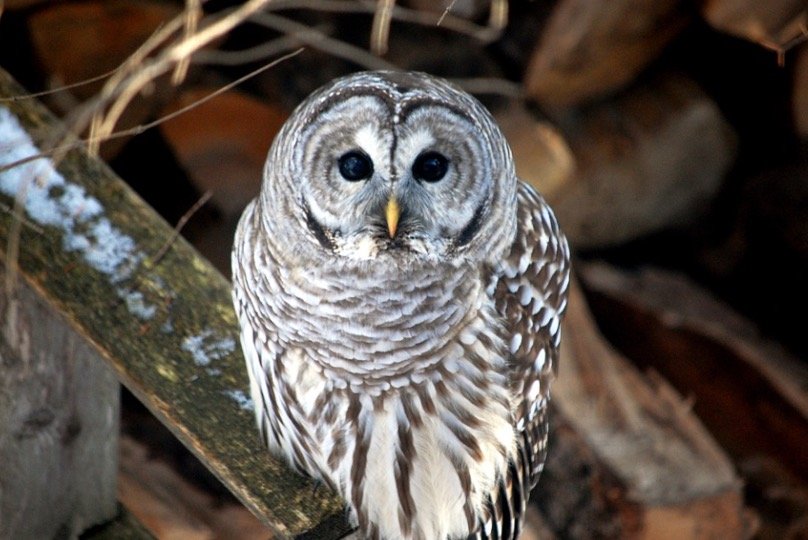 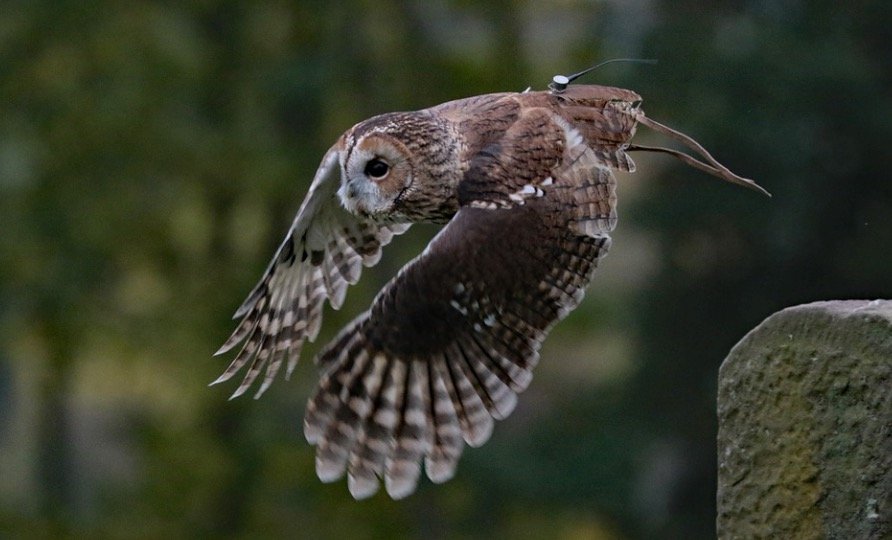 The barrel owls are the member of family Strigidae. The owl is well- known for its repository sounds and excellent skills of hunting.

The huge eyes of the owl and asymmetrical eyes are very accurate that helps it to pinpoint the location of very small prey species in wild. However, these animals show curiosity about animals. Even they are found tamed by some persons.

The sounds are repertoire and sounds like sinister laughter. As compare to females, the voice of males is deeper. The barred owl has great size but still it is smaller than the Great Horned Owl that prey upon adults.

The ears located at different heights allows the owl to pinpoint the location of prey. Over this, the feathers surrounding the facial disk funnel produce sound into the ears 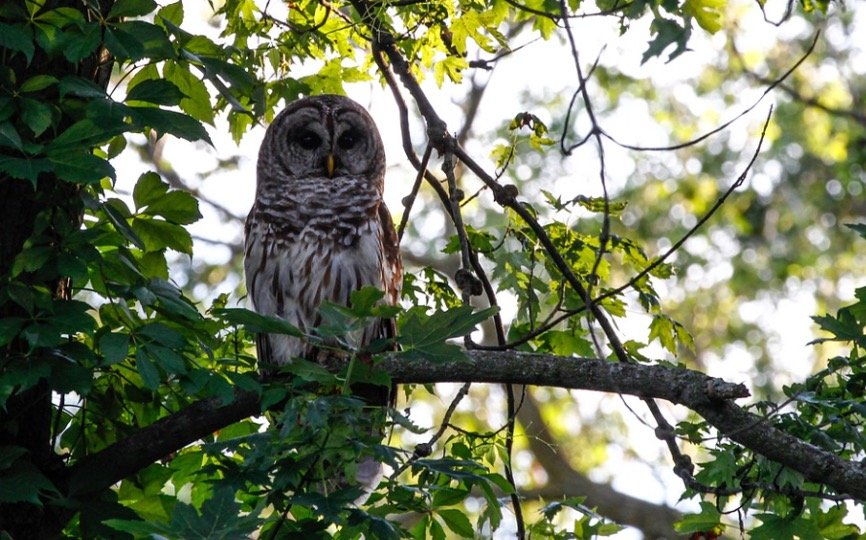 Where You Can Find Barred Owl?

The forests of eastern parts of United States and southeastern part of Canada are the regions, where the barred owl can be seen. Their population is also found in the Pacific Northwest and western coast of Mexico.

The reason behind their occurrence in suburbs is may be abundance of various prey species such as rodents, rats, mice, squirrels, and smaller birds such as house sparrows. The suburbs also has enough large trees, where the owls can make their nests.

Thus a person living in the suburban areas can see the barred owl easily right outside their house. It is also considered that the barred owls are very curious about human beings.

However, they produce hair- raising sounds, but they are very obedient. The barred owl can be also seen in large trees in the residential areas because they spend most of their time in tree hollows.

As discussed above, the barred owl is a large bird thus it require a lot of space for building their nest. They prefer to build their nest in tree cavities, and elms and beeches. If they do not find any old cavity they use the nests of squirrels and other birds.

Unlike other bird species, the barred owl do not construct nests but before laying eggs by female they tidy the floor of the area. 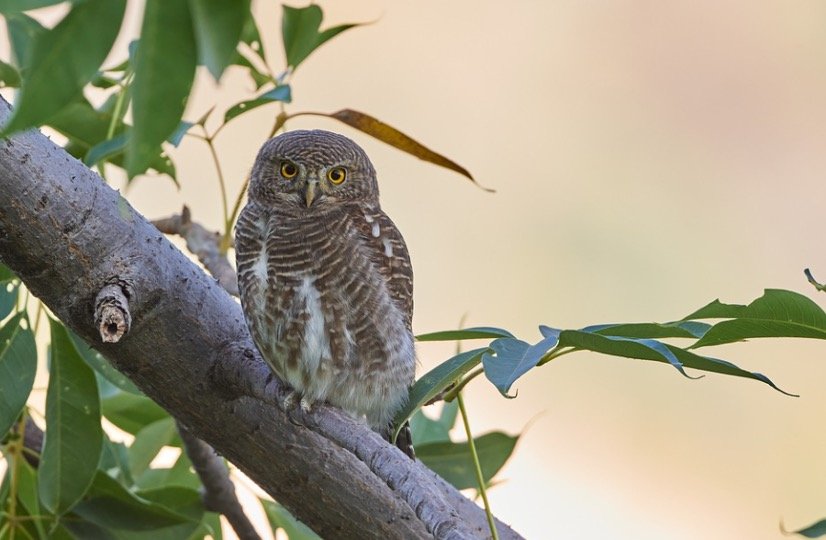 Scientific Name of the Barred Owl

The scientific name of barred owl is Strix varia. The name was derived from a Latin word that refers to the name an owl monster vampire. It was believed that the monster drinks the blood of babies. The word varia refers to the striped variegated plumage of the owl.

The head of the barred owl is round shaped and do not consist ear tufts of its nemesis, the large horned owl. The owl consist horizontally striped breasts of brownish-gray color.

Its belly is also vertically striped with the brown and gray color. The tail, back and wings of the owl are brownish-gray colored with white pattern. Similar to most owls, the eyes of barred owl are very large and disproportionate as compare to the size of its head.

Surprisingly, the owls found in Northern American region have black eyes that make them different from others. Because this color is usually unusual for owls. The barn owl is the only another owl with black eyes found in eastern region.

Usually the owls hunt at night but sometimes they are also seen while hunting during the day. It is a solitary animal and only lives with its partner and offspring until the fledglings become independent.

Even though, they form pairs for life that means they are monogamous animals but still they only meet each other for breeding. Besides breeding season, rest of the year both partners spend in their separate home range.

The barred owls are territorial animals. Their territories can be ranges from 675 to 3049 acres in area but the size of their breeding territory is quite smaller than this.

If barred owls get enough food and shelter available in their territory, they do not migrate. Sometimes, a family of owl spend several generations in a territory.

To claim its territory, the owl vocalizes and perch its territory. Usually males claim larger territories as compare to females.

The barred owl feed upon various organisms. It consumes all the pray species, which can be swallowed and subdued by the owl. It also prey upon several terrestrial species such as voles.

However the barred owl is quite agile and able to catch flying bate also. It grabs the fishes and crayfish by wading into shallow waters and also invades nests. Sometimes it is also seen while feeding on roadkill.

After the digestion completes the barred owl discharges a pellet of undigested substances that includes teeth and fur. The barred owl prefer to consume its prey whole but if the prey is prey is large enough.

It will eat its head and rest of the body will be saved for later. However it may be helpful to use a nestbox but it is not good to feed the wild owls and humans should not attempt this because it can be dangerous for them when they become used to being feed.

Threats and Predators of Barred Owl

However the barred owls are good predators, but still they face predation from various organisms. It can be predated by the great horned owl, which also complete with it for its territory.

The predators also include northern goshawks, weasels and raccoons that eat eggs of and chicks of barred owls. As they live in suburban areas they also dies due to accidents by ears and traps meant for other animals.

In some cases, they are hunted by prey species when they successfully defends them. The barred owls also die due to diseases some common diseases are west Nile virus, avipoxivirus, cancers and aspergillosis.

Toxoplasmosis and trichmoniasis are some parasites that cause diseases in barred owls. Despite all these causes, the life span of a barred owl is more than a decade.

It is recorded that oldest barred owl lived up to 34 years in captivity. The IUCN list for threatened species listed the barred owl as “least concerned” species.

The breeding season of barred owl occur during winters, before mating, the male owl displays to court the female lays white, ovate and rough. The eggs are incubated by only females and hatches after 28 days.

The babies are helpless at the time of birth. They become white colored after two to three weeks and convert into feathers. The female barred owl take care of the offspring for three week. After then, she hunts for the owlets with her mate.

It is believed that the population of barred owl is around 3 million individuals in all over the world. As the owls are expanding their range, the population is also appears to be increasing. According to some scientists, the fire suppression and planting of trees are the major reasons behind their rapid increasing population.