Owls are an iconic creature that still gets me delighted when I see one. They are incredible birds of prey that hunt and consume tiny animals, as well as snakes, frogs, and insects. Owls consume their prey completely, frequently after removing the head, and regurgitate the bones and hair.

Great Horned Owls are the larger owls in Florida, and Burrowing Owls are the tiniest. For the best possible chance of sighting owls in Florida, go to a wooded area around dawn or twilight. Or, if you want to see a burrowing owl, go to open ground; but, because they are little, they may be more difficult to notice than you believe.

As per the World Bird Database and the Florida Ornithological Society, six regular species of owls and one accidental species of owl have been observed in Florida. Six of these Florida owl species are regular species, while one is an accidental species with recorded sightings in the last ten years. Other owl species are considered incidental visits, but I haven’t mentioned them because the number of sightings is so low. 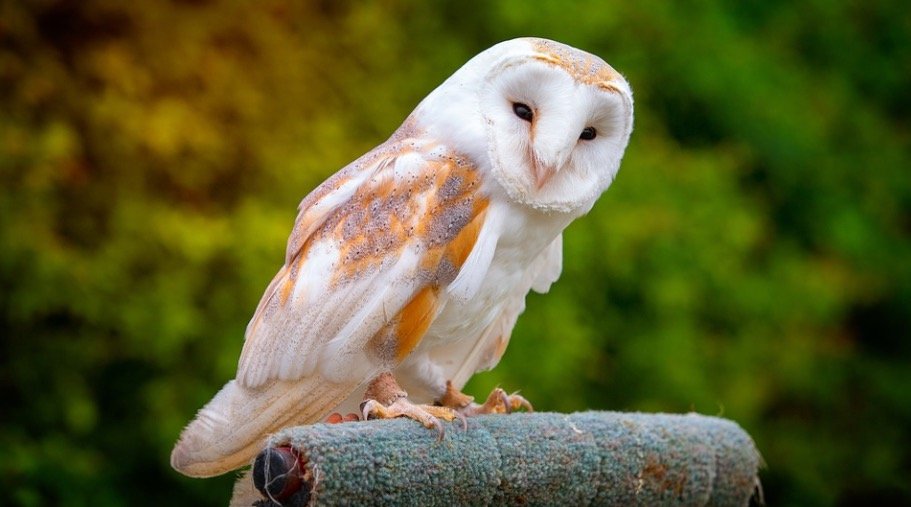 Barn Owls may be seen across Florida all year. They are not migratory. It measures 39.4 to 49.2 inches in wingspan, 12.6 to 15.8 inches in length, and weighs 400 to 700 grams. Barn owls have buff-colored backs and white cheeks, breast, and belly, as well as underwings.

They have round faces, large rounded wings, and short tails. Females have parasite-repelling patches on their chests, and the more spots the female has, the more the male contributes to the nest’s construction.

They forage for tiny rodents across wide area at night, such as fields and meadows, and are so named because they frequently sleep in calm barns throughout the day. Barn owls consume their prey whole and cough out pellets twice daily.

The Barn Owl hunts for food mostly by sound since it has the finest hearing of any animal studied. This allows them to grab prey in full darkness, as well as those hidden behind plants or in a display. They make their nests in tree holes, caves, and frequently in barns or other abandoned or silent structures.

The nest is constructed of regurgitated pellets that have been placed into a cup by their feet. They lay 2-18 white eggs during a period of 1 to 3 broods. There are roughly 46 species of Barn Owls in the world, and they may be found on all six continents. Instead of hooting like other owls, they produce a raspy scream cry. 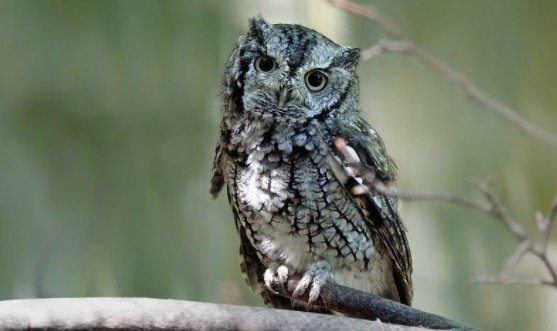 They are roughly the size of a robin but considerably bulkier, with a huge head and nearly no neck. Because of their patterned and spotted camouflage, they are difficult to see against tree bark. The Eastern Screech-Owl may be found in woods and parks, and you could see one sunning itself in a tree hollow on chilly bright days, or by the enthusiastic mob of songbirds when they locate them.

A mound of pellets is another dead giveaway. They have a harsh, falling whinny sound as well as a vibrating trill. Eastern Screech-Owls consume most small creatures, including birds, mammals, insects, reptiles, and amphibians, and hunt largely at night but also at dawn and twilight.

They frequently sit there and wait for prey to pass before leaping from perches. Because they cannot dig their own nests, the Eastern Screech-Owl frequently uses abandoned woodpecker nests or other holes or cavities. Instead of adding nesting material, they deposit their eggs on whatever trash is at the bottom of the hollow. They lay between 2 and 6 whitish eggs. 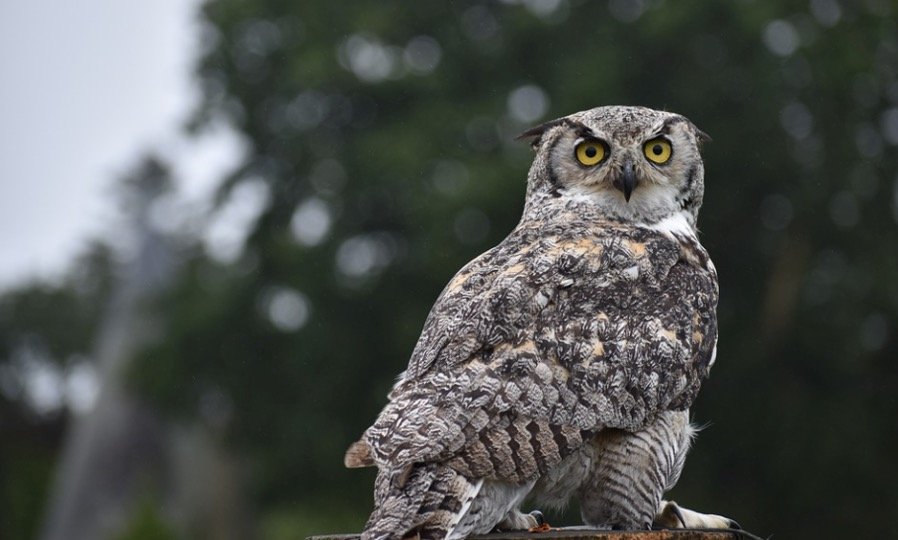 The Great Horned Owl may be seen in Florida and throughout North America all year. They are huge owls with hefty bodies and enormous tufts of hair on their heads that resemble ears. It has a wing span of 39.8 to 57.1 inches, a length of 18.1 to 24.8 inches, and weighs between 910 and 2500 grams.

The Great Horned Owl is a gray-brown bird with a mottled texture and a whitish patch on the neck. Their wings are large and rounded, and they produce a deep hooting cry. It is one of the most prevalent owls in North America and may be found in a variety of environments, including woods, deserts, towns, and grasslands.

These formidable predators feed on birds and animals that are larger than themselves. They will also pursue other raptors including ospreys, peregrine falcons, and owls. Small rodents such as mice or skunks, geese and hares, insects, fish, and carrion are all part of their diversified diet. They aren’t picky eaters and will eat practically everything.

Great Horned Owls build their nests in trees and frequently reuse an existing nest from another species. They may coat the nest with bark, leaves, downy feathers, or pellets, but they also leave it unlined. They lay one to four whitish eggs. 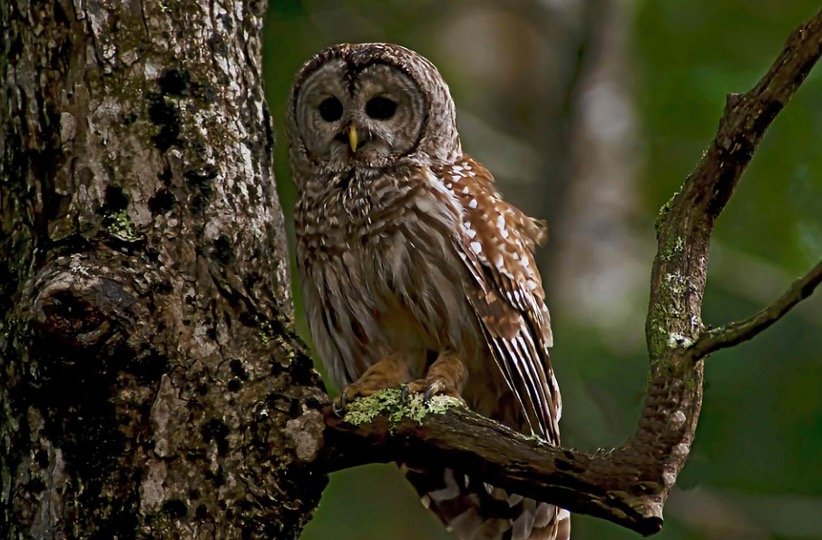 The Barred Owl may be seen in Florida throughout the year. They are the most regularly seen owl species in Florida. These huge, stocky birds are roughly the size of a crow or a goose. It has a wing span of 39 to 43.3 inches, a length of 16.9 to 19.7 inches, and weighs between 470 and 1050 grams.

Barred Owls are brown and white in colour, with a mottled pattern of vertical stripes on the belly and horizontal stripes on the back and upper breast. They have dark eyes, a round head with no ear tufts, and a rounded tail.

The Barred Owl makes a loud barking hoo hoo sound. They hunt for tiny creatures such as squirrels, rabbits, birds, and voles by sitting on an elevated perch and waiting. They inhabit in big mature woods, frequently near water, and deposit 1-5 white eggs in tree holes. 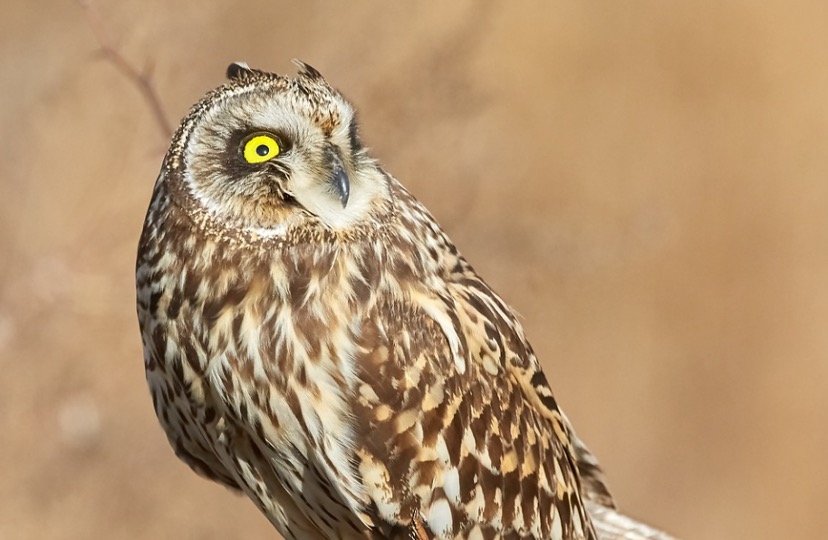 The Short-eared Owl is usually found in Florida throughout the winter, and some stay until June before travelling to further northern states and Canada to mate. They are around the size of a crow and have very little ear tufts. It has a wingspan of 33.5 to 40.5 inches, a length of 13.4 to 16.9 inches, and may weigh up to 475 grams.

Short-eared Owls have mottled black, brown, and white coloration, a pale face, and black-rimmed yellow eyes. They have large, rounded wings and a short tail. The Short-eared Owl, unlike other owls, hunts throughout the day, primarily between dawn and dusk.

They hover low over the ground, seeking for and listening for motion from their prey, which are tiny animals like voles and mice. Short-eared Owls are particularly unique in that they construct their own nests by scraping the ground into a bowl and filling it with grass and soft feathers.

They lay between 1 and 11 cream or white eggs. These owls are not extremely loud, but during courting, the males will utter around a dozen hoots, and while guarding the nest, they may bark, whine, or scream. 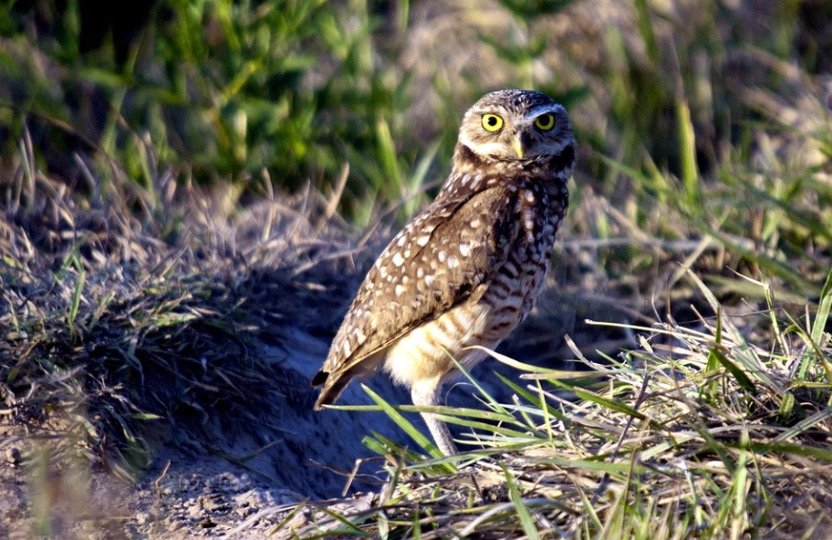 Burrowing Owls appear to have flatter heads and lack certain owls’ facial discs and ear tufts, giving them an unique countenance. Adults have mottled brown and white fur, as well as yellow bills and eyes. Their undersides are lighter in colour than their backs.

Juveniles have a less speckled appearance. It has a wingspan of 21.6 inches, a body length of 7.5 to 9.8 inches, and a weight of up to 150 grams. Breeding throughout the western parts of the United States and southern Canada before moving south to Mexico and Central America.

Those from the southwest, Florida, and northern Mexico can be found all year. They are frequently found in open places with little vegetation and grassland, mainly where prairie dogs or other burrowing animals thrive since they live in ancient tunnels.

They carefully carry animal dung to their burrows in order to attract beetles and insects on which they feast. They will keep any surplus kills in their burrows, which may be very huge and, I assume, pretty stinky. They build their nests in existing burrows and frequently sleep on a dirt mound near the entrance. 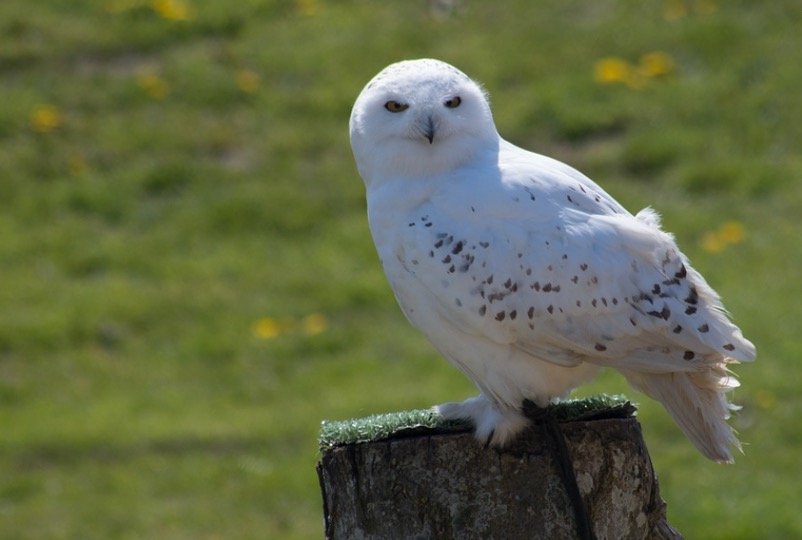 Snowy Owls are designated an accidental owl species in Florida. They have, however, been sighted in Florida during severe irruptive seasons when lemming populations in Canada are low. They were last sighted in Florida in Jacksonville in 2013 and 2014.

They can be difficult to identify against a snowy backdrop, but they prefer to perch on high places, which makes them simpler to find. They are typically silent, but during breeding season they may utter a harsh croak or piercing whistle. Snowy Unlike other owls, owls are diurnal and spend the whole 24-hour summer daylight hunting in the arctic.

They hunt tiny animals, particularly lemmings, and may consume up to 1600 in a year. They also catch flying birds like ptarmigan and ducks. They will consume rodents, rabbits, squirrels, and birds including such ducks and geese in the winter.

The Snowy Owl nest is simply a scratched shallow hole in the tundra. They choose a windy elevation that will be blown clear of snow, and they retain the nest for several years. They lay between 3 and 11 whitish eggs.