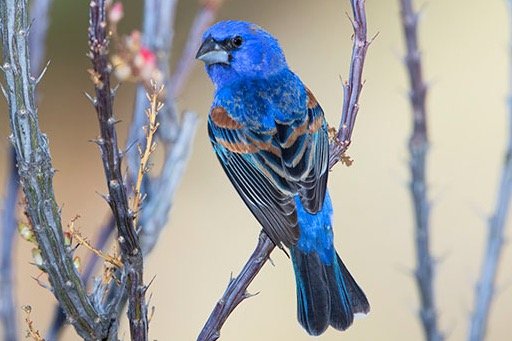 The blue grosbeaks are the largest species of grosbeaks. Their beaks are relatively larger and heavier that helps them in cracking seeds.

Grosbeaks are not classified as a scientific group because it is not compulsory that they were evolved from a common ancestor and maybe they are not closely related to each other.

Surprisingly, the grosbeaks are not threatened and probably they can expand their reproductive range and population.

• The grosbeaks are blue colored and like all other bluebirds, their blue color is a function in which the light strikes their feathers and it is not a pigment.

• The songs are sung by males only and generally, the older males sing longer songs.

• Gross is the name given to the group of grosbeaks.

• A shed snakeskin is sometimes used by grosbeaks to build their nests. It is believed that they use it to scare away predators.

The range of blue grosbeaks starts from North America and expanded to the South of the 40th parallel on the map and the range moves northward. Some other places are Mexico, Central America, and West Indies where grosbeaks can be spotted and their locations also include Ecuador to Idaho in the North.

However the male blue grosbeak consists of beautiful plumage, but still, it cannot find easily in many backyards. The reason behind this is they prefer to hide in briars and vines with their partner.

The best way to get a glimpse of a blue grosbeak is we can follow it by learning its song. When the birds are excited, they give a “chink” sound or a buzzing sound. The birds also glean seeds from fields where they can be spotted easily.

The nests are usually prepared by the use of twigs, bits of newspaper, dead leaves, rags, roots, and sometimes snakeskin. The female bird also uses fine grasses, roots, and hairs to line the nest.

The nest can be around 2 inches deep and 2 to 3 inches wide. Usually, there are two broods produced by females in a year. When the female starts building a new nest, the male takes care of the chicks from the first brood.

Passerina caerulea is the scientific name of the blue grosbeak. The name is derived from a Latin word, where the word Passerina means “as a sparrow” and caerulea means for shades of blue. The blue grosbeak is classified into seven subspecies. They are-

Appearance of a Blue Grosbeak

According to the maps, the range of these birds overlaps in some places. As discussed above that the blue coloration of grosbeak is not a pigment but an optical illusion, which is caused by the way light plays over its feathers.

These amazing colors are not visible to us thus human eyes can’t see them. Some reddish-brown bars are present on the wings of male grosbeaks, which consist of a length of around 5.5 to 7.5 inches.

Their eyes are brown and the bill is conical shaped. A bit of blue color is also present in the feathers of the female grosbeak but otherwise, its color is all over brown.

The blue feather can be seen at the right angle only. The size of male and female grosbeak is about the same. The tail of the grosbeaks is fan-shaped and they have rounded wings.

The blue grosbeaks are very shy around human beings thus they cannot be spotted easily. The bird will fly if it thinks that anyone is seeing it. However, during summers they search for remaining seeds from the cleared field where they can be spotted hopping or flying.

They search for seeds with other bird species also sometimes move along the tree branches by flicking their tails, however, it is still unknown that why they do this.

In the northern part of its range, the breeding time of the blue grosbeak starts from early spring to hate summer. When we observe the migration pattern on a map, we find out that they build their nests in the southern United States and northern Mexico.

The Mexican coast the Caribbean and northern South American are the regions where the bird spends its winters. Some populations residing in central Mexico are non-migratory birds that live year-round in their habitats.

The blue grosbeak usually feeds on cicadas, crickets, grasshoppers, and other insects. They also eat mantises, beetles, caterpillars, crabs, spiders, and other invertebrates. Sometimes they also eat seeds remaining in the cleared field and grasslands.

Some food materials are not good for them, which should be also avoided such as onions, chocolate, garlic, apple seeds, and apricots. These items can be toxic for them which also include table scraps and old bread.

It seems that the birds get benefits from human activities because the seeds left in the agricultural field are eaten by these birds. The nest of the bird is built in these places where tall trees have been removed by logging.

Cats are the major predators of blue grosbeaks. They catch them and eat them. Other predators include raptors and cowbirds.

Interestingly the eggs of the cowbirds are laid the nests of other birds and their babies are also raised by foster parents after the biological chicks die with the much larger cowbird babies.

Scientists are worried that birds can spread diseases due to the explanation of their range. Because they carry feather mites. However, it is not indicated get that they are of any disease.

What Eats The Blue Grosbeak?

The males try to attract their female partners for a mate. They sing and arrive earlier than females in their nesting range. The nests were built by the females when she selects a mate.

The female blue grosbeak lay around three to five eggs that are pale blue colored and freckled. The incubation period is of around 11 to 12 days and the eggs are incubated by females.

During the incubation period, the male feeds the female. After the eggs hatch, the babies start fledging in 9 to 10 days, and the babies are fed by both parents. The parents search for food items such as small invertebrates, insects, and seeds from open areas for their babies before they start their annual migration.

The lifespan of blue grosbeak is five years in the wild. However, the oldest bird has lived for around seven years.