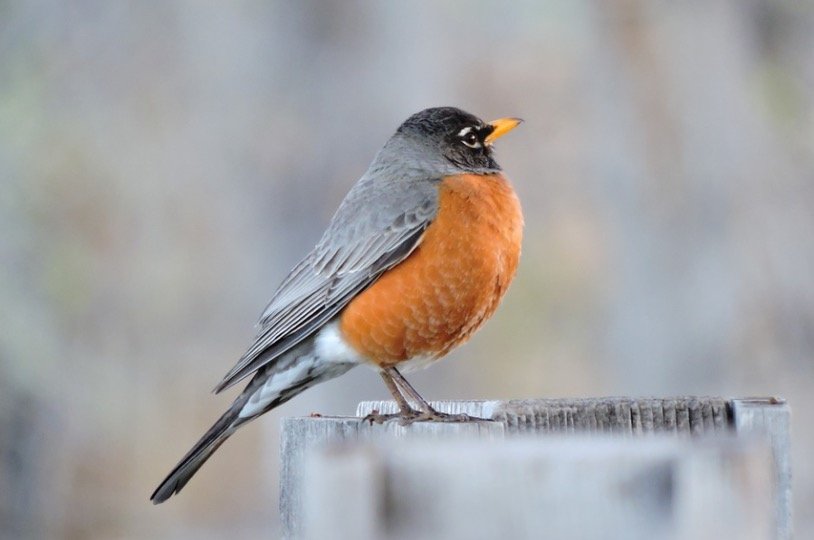 American robin or Turdus linnaeus belongs to the family Passeriformes. It is a songbird in the thrush family. Usually, thrush is also known as “announcer of spring”.

American robins are well adapted to humans and help them in pest control. The ecosystem also gets benefits from these robins by dispersal of seeds from the fruits eaten by them. 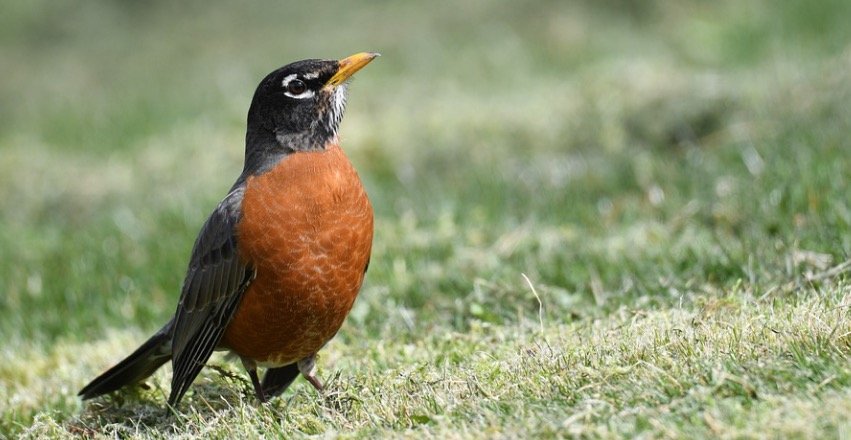 Robins are distributed in the Northern American continent, including the United States of America, Canada, and Mexico. Their habitats are the woodlands and shrubland. They also live in open lands or field areas and also make their nests in residential areas.

They can be easily seen in grassland areas while foraging for food when they are not building their nests in trees. The American robins are also found in lawns and gardens, agricultural fields, parks in cities, and forest areas.

To find these birds in their natural habitats, the best time depends on the location. They are migratory birds thus according to the season, they are found in different locations. However, they remain active all the year. 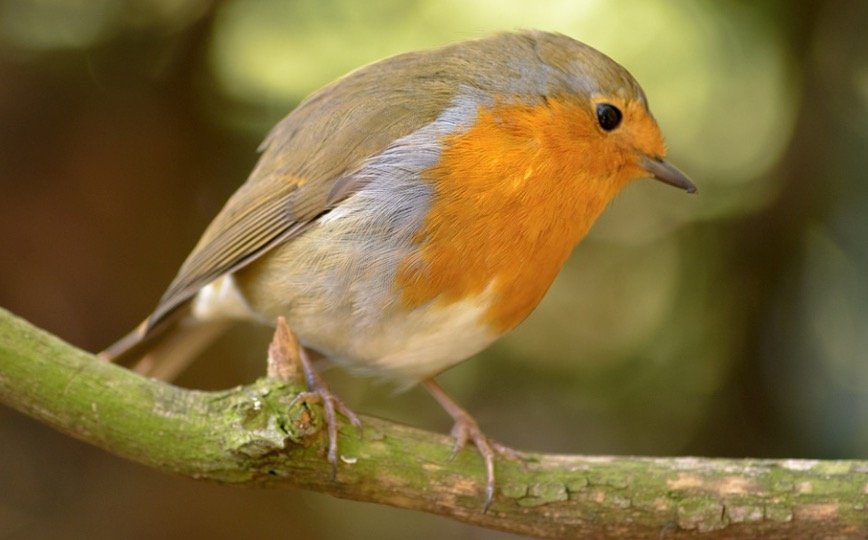 The male Robins do not help the females in building a nest. The female builds a nest alone and uses branches, grass, feathers, and paper to make the outer structure of the nest.

The inside of the nest is cushioned by grass and other plant materials. The nest becomes around three to six inches tall and six to eight inches wide after finishing.

They usually build their nests in the tree branches or the dense bushes of shrubs. Typically, the distance of the nest from the ground is very high, around 4.9 and 14.8 feet high. 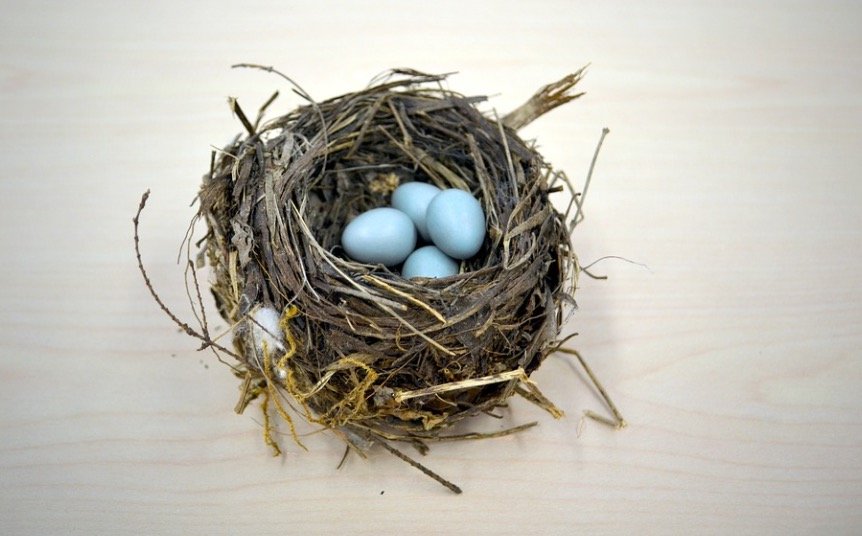 Scientific Name of the American Robin

Formally, the English robin is named as European robin from where the American robin gets its name. Persons who settled earlier in this region have observed that the robins are similar to European robins to some extent, especially their red-orange breast that appears similar to the European robins.

However, it seems that it is only a comparative similarity between both species. These species are not even closely related. However, they are related to the same order and class but both belong to different families.

How To Attract Wrens To Your Yard?

The English robin is native to Europe and it is a member of the family Muscicapidae. The species is also known as old-world flycatchers. On the other hand, the American robin is a thrush that belongs to the family Turdidae.

The anatomy of the American robin is also different from the English robin and they are also their European lookalikes are larger than theirs.

The American robins are around 8 to 11 inches long and weigh up to 75 to 77 grams. The size of their feather is around 12 to 16 inches. The anatomy of the robin is distinctive of a thrush.

Their beak, feathers, and wings are included in their anatomical features. They contain a yellow beak and striped throat of black and white. The back of the robin is gray or black colored and the head is also black with an orange-colored chest.

Usually, the females are relatively smaller than male robins that also have more colorful features. Robins are social birds. They form small groups and in larger groups or flocks during the night.

The birds are diurnal and during the day, they remain most active. Their voice is very melodious and sings very well. Often, the robin is one of the birds that sing in the early morning.

Migration Pattern and Timing of the American Robin

American robins are migratory birds. They travel in the flocks during the day. In winter, the birds travel towards the south and travel back to the north during the spring season. In the fall, the migration of the robins depends upon the good food availability in an area.

American robins are omnivorous birds. They feed on both plants and animals. They are diurnal and forages for food during the day, however, they also forage at night sometimes.

The fruits and berries make around 60% of their total diet and these food materials are especially important during the winter season.

What Does an American Robin Eat?

An American robin feeds on a variety of invertebrates including earthworms, caterpillars, beetle grubs, spiders, grasshoppers, and snails along with the fruits and berries.

Predators, Threats, and Conservation Status of the American Robin

Most of the time, the American robin lives in residential areas or especially in backyards, thus they are threatened by poisons or pesticides used by humans indirectly and also killed by pet cats. In wild, they are also preyed on by several animals.

The IUCN red list for threatened species has listed the American robin as the “least concerned” species. Thus, the species is stable now. In the past, they also faced the threat of poaching but at present, they are conserved by the US migratory bird act.

Predators of the American Robin

The predators of American robin include snakes and birds of prey besides domestic cats. Hawks, eagles, snowy owls, and northern pygmy owls also prey upon American robins. Some snakes, including rat snakes and gopher snakes, regularly eat the American robin.

The breeding season of American robins occurs between April and July. They are viviparous organisms. They also perform courtship rituals to attract the female for mating.

The courtship rituals include shaking wings, spreading his tail, and singing to get the attention of a female. Usually, after mating the female lays three and five light blue colored eggs.

The eggs hatch after 12 to 14 days and the chicks are altricial at that time. The parents feed and take care of the chicks because they are not independent at the time of birth. About 13 days after hatching the eggs, the chicks become independent and leave the nest.

Generally, the chicks become good enough at flying in two weeks. The life span of an American robin is around two years and once a year they mot completely.

Population of the American Robin

Currently, they do not have any threat of a declining population and their population trend is also increasing, thus the conservation status of these birds is the least concern.