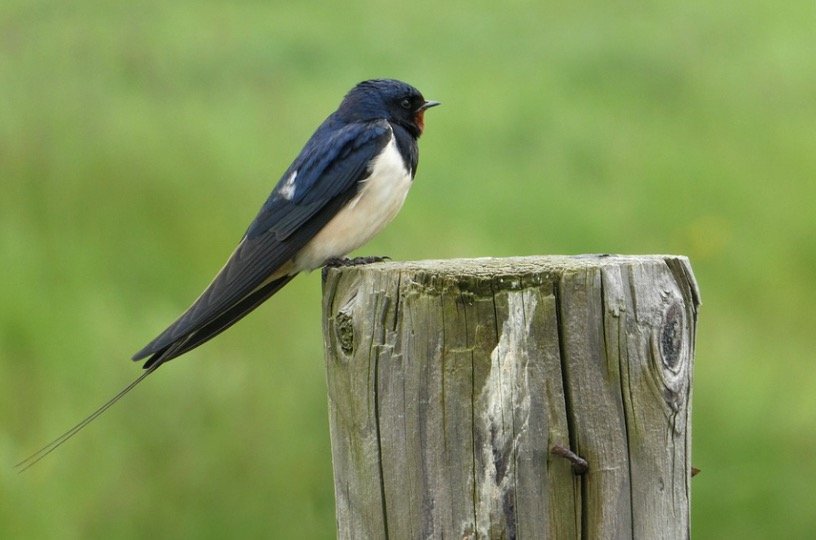 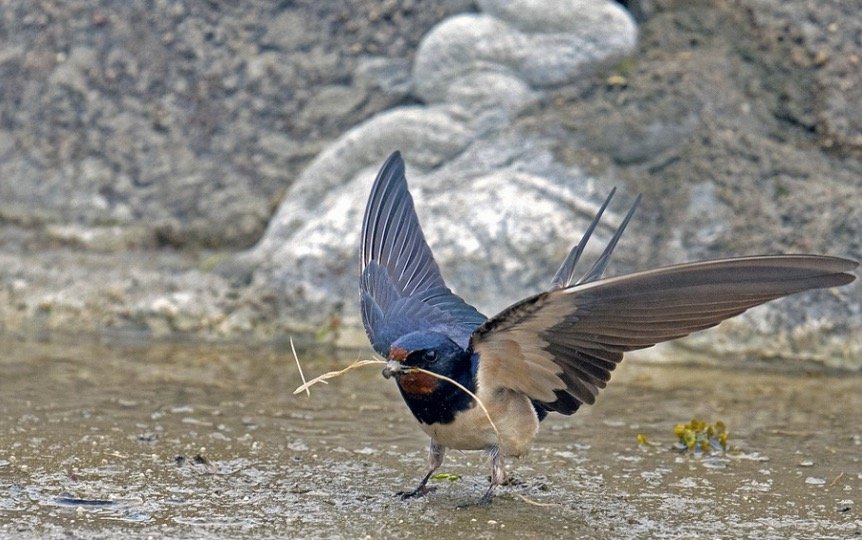 The barn swallow is a member of the group of passerine birds. The word passerine is also referred to as “perching bird”. These birds consist of three toes in their feet that are pointed forward and a single toe points backward.

The vibrant colors of Barn Swallow attract bird watchers and enthusiasts toward them. The birds belong to the family Hirundinidae. 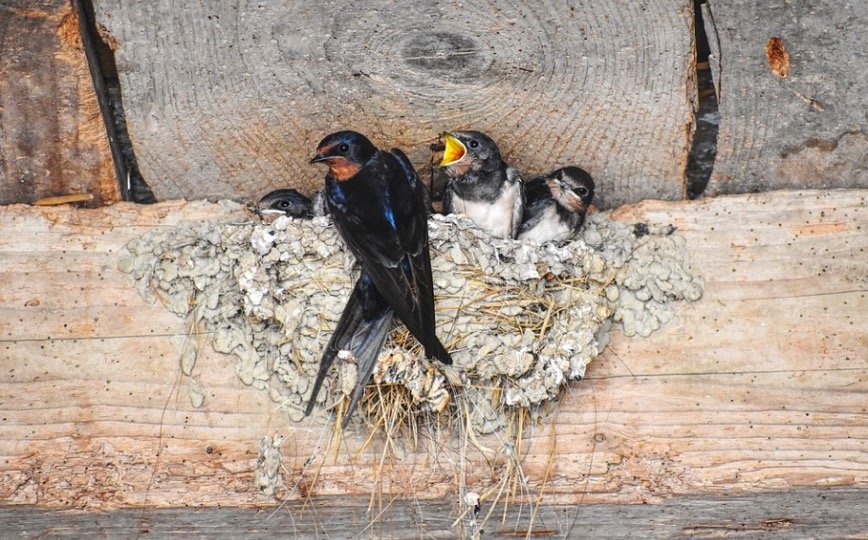 The barn swallows are quite interesting organisms that show various incredible facts.

The barn swallow is the national bird of Austria.

The birds are endothermic and make their nests commonly in man-made buildings.

The Barn Swallows are distributed in many parts of the world. For instance, the species inhabit the Palearctic, Nearctic, and oriental regions and are also found in Asia. The species are commonly found in temperate climates.

Open land areas and some specific water sources are the preferred habitats of barn swallows. Naturally, the barn swallow lives in the grasslands, shrublands, wetlands, and savannas.

They can easily survive in human-populated and urban areas and are also seen frequently dwelling in such areas. The parks, meadows, ponds, and fields are the favorite places for them where they enjoy a lot.

They are migratory birds and can be easily spotted while flying low over fields and water sources during foraging for food. By creating a special house or nest box for them, possibly these beautiful birds can be attracted to our yard.

The birdhouse making is quite simple. However, while creating a birdhouse, the very important and considering thing is the barn swallow requires mud for building its nest.

The nest box or house should be attached to a building after making it, where it can be sheltered. To avoid predation, a person should also take care that the nest box should be high enough so that predators cannot access the eggs.

If we are carrying more than one box that it should be also considered that the distance between two boxes should be more than five feet so that they are not nearby. 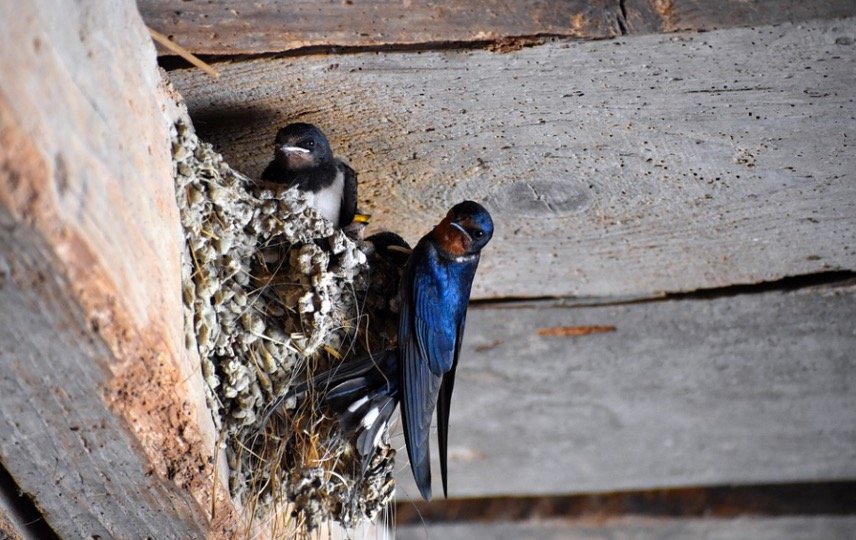 The barn swallow chooses their nesting sites by taking their time. They usually make nests in enough high and sheltered places. They can use any building, its inner and outer areas, and roofs and their upper portions.

Barn and sheds are the common nesting sites of barn owls due to which they get their name barn owl. Sometimes they also made nests in our homes.

They use mud to build the structure of the nest and the building is carried out by both male and female owls. The nests are usually cup-shaped and covered by grasses and feathers.

The word “Hirundo” means swallow and Rustica is referring to “of the country”. Barn swallow has six subspecies that are universally recognized. The species include Hirundo rustica Rustica, H.r.transvita, H. r. saving, H. r. gutturalis, H. r. Tyler, and H. r. erythrogaster. However, H. r. mandschuria and H. r. saturata are also recognized as separate subspecies by some taxonomists but they are not fully accepted yet.

Behavior and Appearance of Barn Swallow

The barn swallow has a blue-colored body that includes its head and dorsal region and the underside of the bird is white beige colored. They have orange or cinnamon hue-colored forehead and chest.

The tail of a barn swallow ranges from gray to black. As compared to females, males generally consist of brighter hues and are also larger. The females also contain shorter tail feathers than males.

The endothermic nature of barn swallows helps them to easily survive in different climates during migration. They communicate with each other by using vocalization and body language.

Barn swallows are migratory birds that migrate during winters. During this time, they also prepare for mating. They might cover long distances during migration and can travel to South America, South Asia, Indonesia, and Micronesia.

The species migrate towards North America, Northern Europe, Japan, North Central Asia, the Middle East, and North Africa during spring for mating and breeding. The migration pattern is followed by barn swallows annually.

The barn swallow is a carnivorous bird. A large portion of their diet is consists of insects, which are also their main prey. Mostly, they consume flying insects but they also prey upon other non-flying insects. They drink water by flying low over the water bodies.

What Does the Barn Swallow Eat?

Many insect species such as flies, beetles, bees, and wasps are the main prey species of these birds. They also consume butterflies, moths, and dragonflies and primarily eat a variety of flying insects.

The barn swallow is facing a major threat from its natural predators. Environmental factors such as increasing population, climate change is also imposing threats on these organisms.

Due to the advancements in agriculture, the barn swallows are facing the threat of habitat loss that is one of the largest problems. Barn swallows are also dying by the use of pesticides.

Thus indirectly, humans are imposing the biggest threat to barn swallows. The barn swallows are listed as “least concerned” species by the IUCN red list of endangered species.

The eggs and hatchlings face more threats of predation and are usually consumed by snakes, cats, bullfrogs, raccoons, and some other animals.

Barn swallows reproduce by sexual methods. They also perform courtship rituals in which the mating pair participates in dace-like air chase. Songs were also sung by the males to impress their partner and also groom each other’s feathers.

They settle down and then mate. The female swallow lay around three to seven eggs in the spring season between April to August. In southern regions, mating may start early in February and end as late as October.

The eggs were also incubated by males and also protected by them. After 12 to 17 days of laying eggs, they hatch and produce hatchlings. At the time of birth, the hatchlings are naked, helpless, and blind, thus they require parental care.

The juveniles are helped by other older chicks that are unrelated. These males feed and take care of the individuals. The chicks can fledge and start learning to fly at the age of 20 days. They usually leave their nest and become independent after a week from fledging.

The barn swallows shed off during winters and molting occurs annually. The lifespan of barn swallow is around four to eight years. However, the oldest barn swallow had a life span of ten years.

In wild, the total estimated population of barn swallow is between 290 million and 487 million. Of the total population, 58 to 97.4 million individuals are only found in Europe.