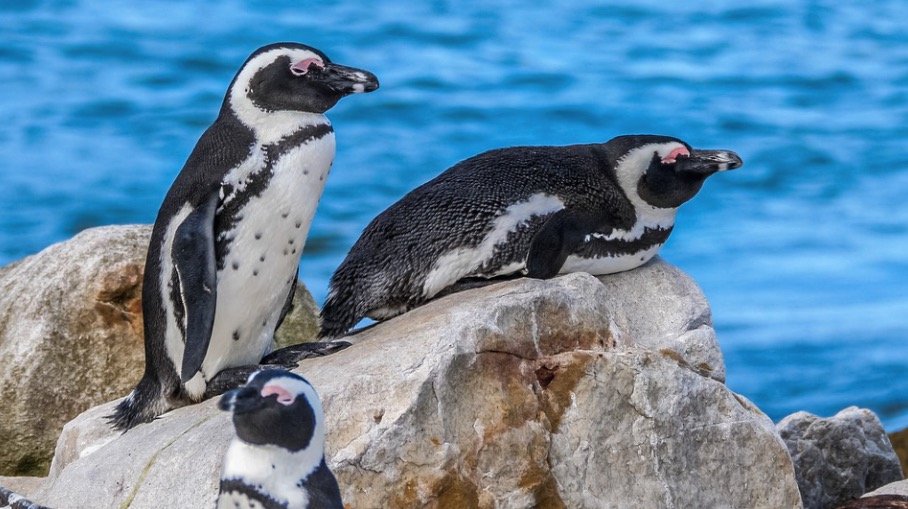 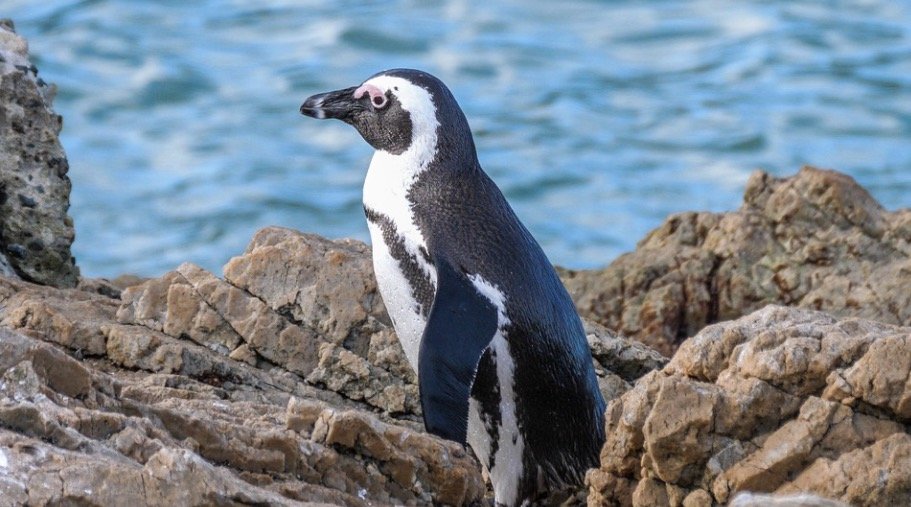 Classification and Evolution of African Penguin

The African penguin is a small to medium-sized penguin species. The coast of South Africa and several Islands around there are the distributed areas of the African Penguin.

The Magellanic Penguins, Humboldt penguins, and the Galapagos Penguin occur in the Pacific ocean are closely related species to the African Penguins.

Appearance of the African Penguin

The body of an African Penguin consists of black and white markings on their body that make them a fairly distinguishing species. Their feet are black and also have a black and sharp-pointed beak.

The white chest of the African Penguin contains several dot-like markings that are considered as unique as the human fingerprints for each individual. Generally, the female penguin is slightly smaller than the male penguin.

However, they appear similar and have pink glands above their eyes, which is the characteristic feature of these penguins. They use these glands to cope with temperate climates.

The penguin sends more blood to these glands when it gets hotter conditions and the surrounding air cool down the blood, thus, in turn, these glands appear pinker. 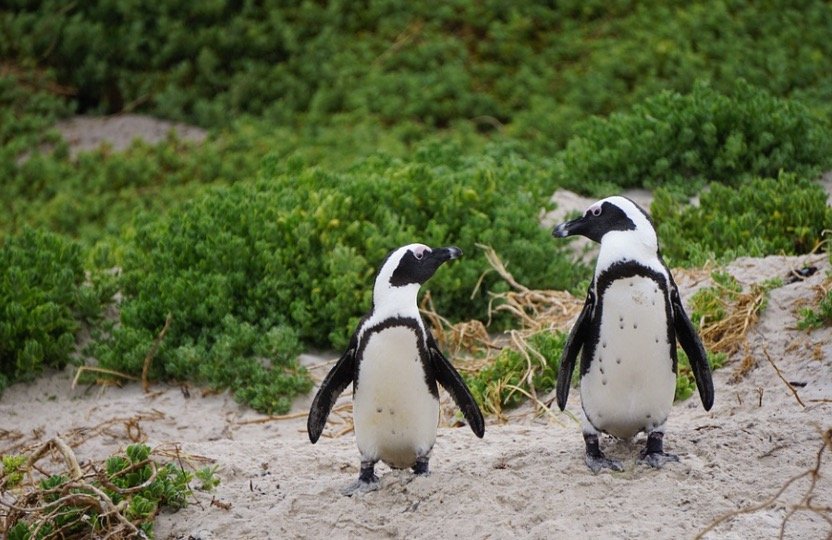 Distribution and Habitat of African Penguin

The south-western coast of Africa is the preferred location for the African Penguin. Here, around 27 colonies are recorded on 24 islands ranging from Namibia and Algoa Bay, near Elizabeth, South Africa.

The largest colony of these penguins is seen on Dyer Island, Kleinbaai. The Benguela Current has a high amount of nutrients in the water and plenty of food thus is become the most densely distributed habitat for African penguins.

Most of the time, the penguins remain in the sea and during days they prefer sheltered burrows to avoid hot sunlight. They form their nesting sites on rocky islands. African penguins can survive in non-freezing conditions and they are the only species that has the ability.

They use to burrow and emerge only in the morning and evening to avoid hot sunlight and also their pink glands above their eyes help them to cool the blood down.

Behavior and Lifestyle of African Penguin

The African penguins are highly social birds like other penguin species. They form a pair bond for life when becoming an adult. To remove parasites, rearrange feathers and for cleaning purposes, they can be often observed grooming one another.

It also plays a role in strengthening their social bonds between pairs. African penguins also perform very noisy courtship rituals, during this the male and female use donkey-like sounds to call each other.

They use a bathing spot, which is usually only a few meters from the seashore. They use to do baths for cleaning themselves and also to cool down the heat.

African penguins reach sexual maturity at the age of four. During this time, they make breeding pairs for the rest of their lives. The female penguin lays two eggs in a breeding season in a burrow made by herself beneath a rock or bush.

Both the parents incubate eggs for up to 40 days. Usually only one egg hatch from the two. Both parents are involved in the parental care of the chick and feed and keep warm the offspring for around one month of age.

After then, the chick becomes independent and form creches with other chicks to avoid predation and other threats. However, at the age of 3 to 5 months, they live with their parents after which leave the colony.

However, their separation from the colony depends upon the food availability and quality of food in the area. After a few years, the chicks return to the colony to molt into their adult plumage. The life span of the African Penguin is around 10 to 15 years.

Diet and Prey of African Penguin

Like other penguin species, the African penguins are carnivorous birds. They feed on marine organisms such as Anchovies, Sardines, Horse Mackerel, and Round Herrings. In some cases, they also prey upon crustaceans and Squid during food unavailability.

The African Penguin has the great ability to move at a very high speed through the water due to k their streamlined body. They can move at the speed of around 20 kph while hunting for food.

They are also good divers and can dive into the depth of the ocean to catch their prey. They can usually dive around 30 meters but in many cases, they are also reported to dive more than 100 meters deep for hunting.

Predators and Threats of African Penguin

The eggs and chicks of these penguins face more threats from the predators. Human activities such as the increasing population also impose a threat for African penguins.

Their population declines drastically in their native regions because humans started exploiting their eggs for food. Habitat destruction is another major threat for African penguins.

Fun Facts About About African Penguin!

To keep their skin dry. The African Penguin uses relatively more feathers than other birds that act as a waterproof layer. When they go back to their colonies, they shed once a year, which lasts for about 20 days.

During this time, the African Penguin is not able to eat and swim thus losing half of their body weight. Most of the time, they spend while fishing in the ocean and travel from 30 to 110 km for hunting, which depends on the area.

However, the penguins who have chicks with them, do not travel for long distances and catch food as quickly as possible from the areas near to shore. The African Penguin is also called the Jackass penguin because they make a donkey-like call during their courtship rituals.

Relationship with Humans of African Penguin

It is believed that the African Penguins are the first species of penguins that come in contact with humans. It may be because instead of Antarctica, they inhabit the South African coast.

However, their different habitat is not beneficial because here, their eggs were stolen for food, and the guano was harvested for fertilizer. At present, African Penguin is facing many other threats such as increased competition for food due to oil pollutions and commercial fishing in the oceans.

The penguins are very nervous thus it seems that the area is strictly monitored by people however only a few nesting sites can be accessed by tourists.

The IUCN red list of threatened species listed the African Penguin as an “endangered species”. According to some estimations, the population of African Penguin has decreased around 10% since 1900, which is around 70,000 breeding pairs now.

The population had decreased by 1950 and again decreased by 1980. It is estimated that the population is declining by the rate of 2% decline every year. The major reason behind their decline is the consumption of their eggs by humans and habitat disruption.