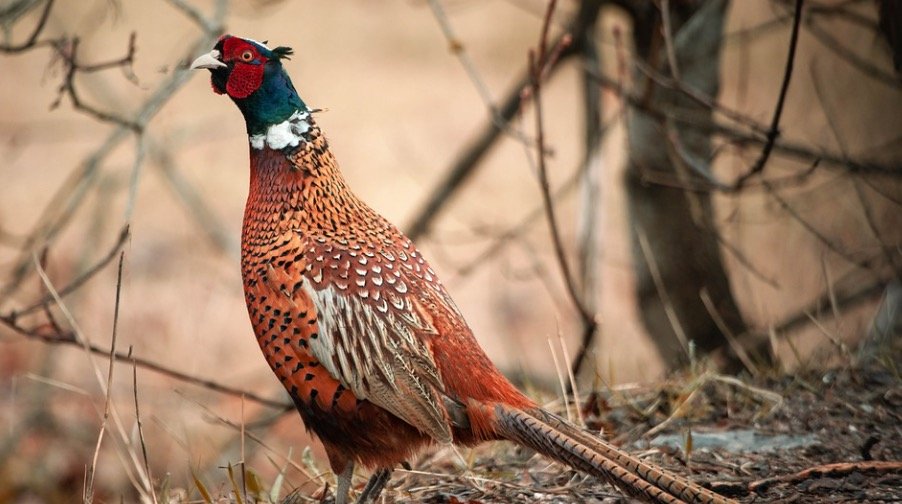 South Dakota State Bird: All You Need To Know

South Dakota is the 17th biggest state in the United States, yet it is also the 5th least populated. South Dakota is home to several natural lakes, low mountains, and vast plains. The Coyote is the official mammal of South Dakota, but what is the state bird?

In 1943, the Ring-necked Pheasant (Phasianus colchicus) was designated as the national bird of SD. The Chinese ring-necked pheasant, as it is officially named, did not originate in the United States. When it was brought to South Dakota in 1898, the people fell in love with it because of its gorgeous plumage and tasty meat. 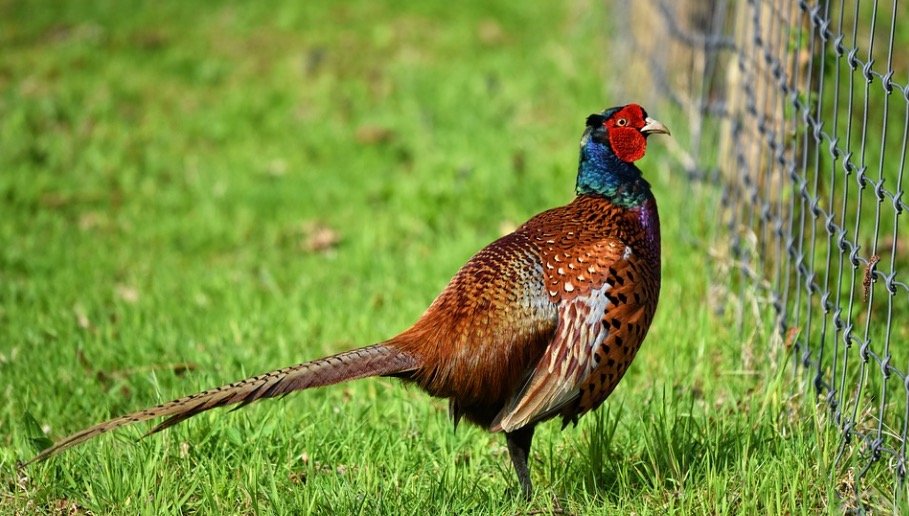 Why is the Ring-necked Pheasant South Dakota State Bird?

Ring-necked Pheasant plumage is distinctive, with gold, orange, and yellow flecked with black. Its crimson and black visage sticks out in the South Dakota fields. When it was first introduced to the state, inhabitants started hunting it, and it quickly became a gamefowl favourite.

The bird, a native of Asia, immediately became popular across the Midwest, and this sentiment has persisted. This game species has survived better than any of the more than 40 imported species in the US. 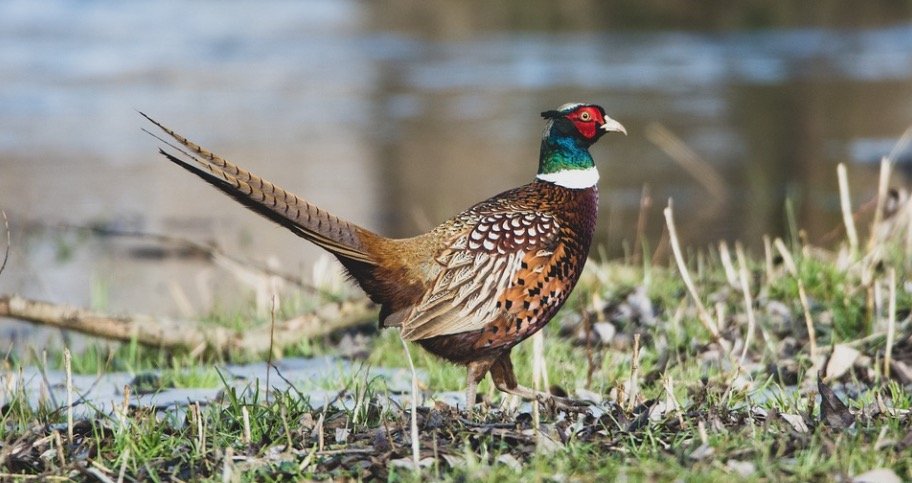 A ring-necked Pheasant may grow to be very enormous, reaching about three feet in length. It has a long, pointed tail. The females of the species have brown feathers, occasionally buffy brown, like the smaller songbirds of the south and east US, but the male has darker feathers and a white collar, sometimes known as a ring.

The male also has a red patch around his eyes and a blue-green iridescent head. These birds are a tad lighter than your average gamefowl. They barely reach a weight of two to 2.6 pounds. Their wingspan ranges from 22.1 to 33.9 inches.

These birds prefer a highland environment. Farm fields, scrub, rangeland, hedgerows, and forest borders are preferred habitats. Every year, from May to June, they lay their eggs. Their nest is a modest three-inch-deep earth hole lined with weeds and grasses.

Despite the fact that the nest is on the ground, the bird instals it under deep cover. While the male lures the female with his loud crowing of “khaaaa-cack,” she incubates her eggs alone after she deposits a clutch of seven to fourteen eggs.

Many pheasant eggs do not hatch because they are either damaged by people or preyed upon by animals. The young may flee the nest as soon as they hatch. They are born self-sufficient, but it takes them around two weeks to learn to fly.

They feed themselves as the female teaches them basic survival skills. These young birds often die, and this species’ newborn birds have a high mortality rate. One of the flying manoeuvres they learn is to propel themselves into the sky quickly, generating a loud takeoff that might frighten the predator.

Despite this, they will usually flee a perilous circumstance. They can traverse a small distance swiftly, and you might call them the avian equivalent of the 50-yard sprint.

Females of this species like to remain close to home, and will typically nest less than a half mile from their wintering range. While they detest tall grasses in general, they come in helpful for concealing an egg nest, thus the female makes an exception during this vital period. 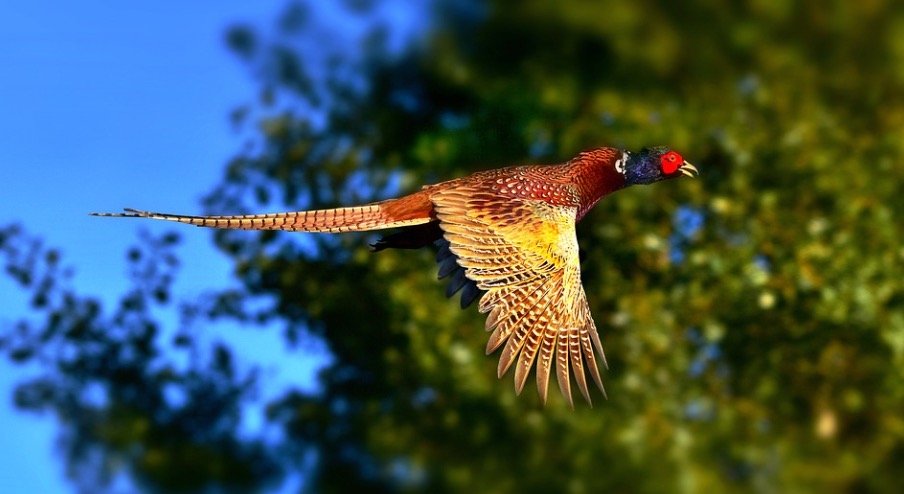 Ring-necked pheasants form segregated flocks in the fall and winter, dividing along gender lines. Males congregate in smaller groupings. They will stay in these flocks until April. The males, known as cocks, create harems in the same way as hens do with a rooster.

Every spring, he must protect his territory and harem against intruders. This can result in bloody battles. They aren’t usually deadly battles, but they may inflict bodily harm since the two males will bite each other’s throats, peak each other, claw each other, and so on.

If you’re a male pheasant, you remain in your own region and never leave it. They favour fields and farmlands, but will dwell in forests and wetlands as long as there is undergrowth for them to utilize. Females like to lay their eggs in fields.

They roost in trees or thick bushes throughout the spring and summer. In the autumn, they migrate to agricultural fields, weedy regions, and wooded wetlands. Yes, the latter refers to marshes.

When looking for this bird, use DEET-containing insect spray, since many of the sites it frequents offer a breeding environment for mosquitos. They prefer grass cover along the roadside, fence lines, marshes, and ditches during the early nesting season.

When the vegetation becomes larger, they change their habitat, usually to an area with hay, particularly alfalfa. 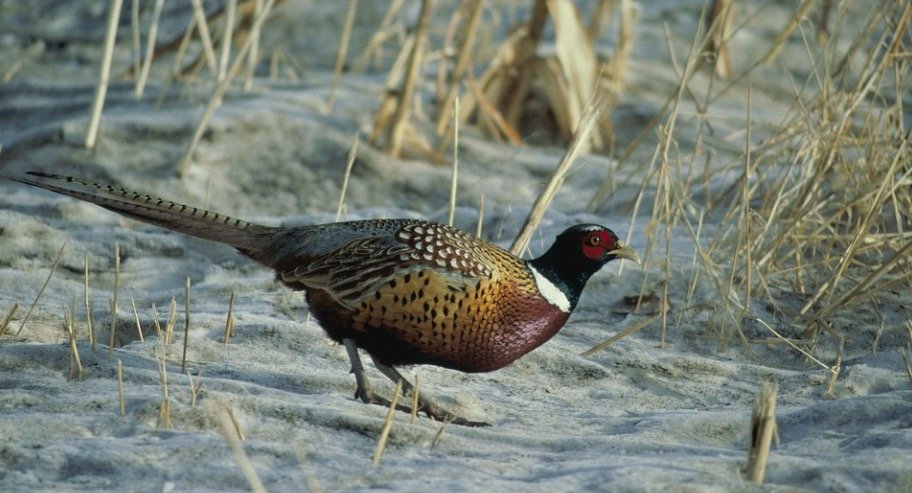 What do Ring-necked Pheasants eat?

Ring-necked Pheasants consume a variety of foods. They forage on the ground, scratching the ground with their feet or bill to find food. Berries, buds, acorns, grains, roots, seeds, insects, earthworms, snails, and bigger prey make up their regular diet.

Snakes, mice, and frogs will be eaten by these pheasants. They are astute hunters who become the prey when humans arrive during hunting season.

These birds may be seen feeding on seeds from agricultural fields if they reside near one. They will eat wild fruits, insects, roots, grasses, leaves, and roots as well.

They enjoy fresh vegetables and protein in the spring. During this period, the birds will consume grasshoppers, crickets, beetles, ants, and caterpillars.

Where Do Owls Live? All You Need To Know

How Long Do Owls Live? All You Need To Know

Why Do Owls Hoot? All You Need To Know