King Vulture – All You Need To Know 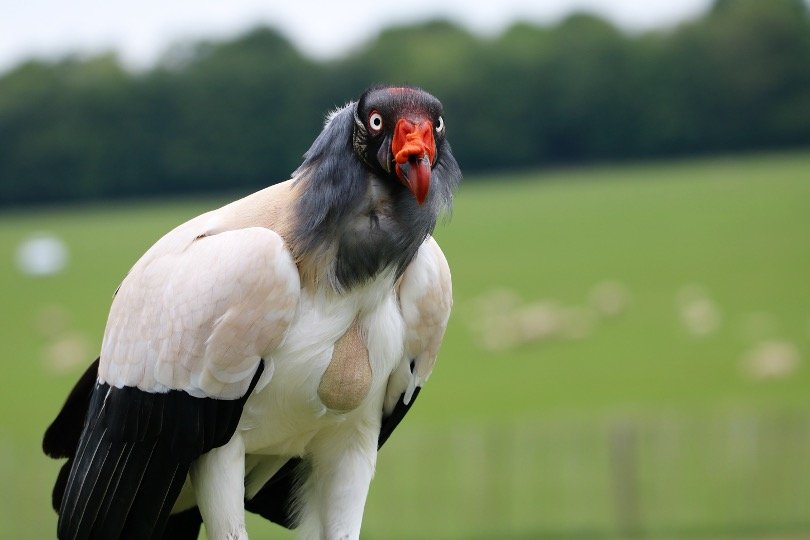 Have you heard of the king vulture? In this article, you’ll learn 34 facts about king vultures, including their nutrition, size, wingspan, habitat, and other distinguishing characteristics. There are also numerous photographs of the world’s most colourful vulture.

Travel Tip: Bring a camera with a good zoom and a good pair of binoculars if you’re going to the Amazon basin. These will improve your chances of spotting and shooting a wild king vulture.

Interesting Facts About The King Vulture

Vultures aren’t normally at the top of birders’ lists of favourite birds, but the king vulture has several unique and appealing characteristics.

It’s not only a brightly coloured vulture, but it also cares about hygiene and plays a crucial role in the environment.

Overview Of The King Vulture

The King vulture (Sarcoramphus papa) is found in the range from Mexico down to southern Argentina. Their height is up to 71 to 81 cm and they weigh around 3.17 to 4.08 kg with a wingspan of up to 1.2 to 2 m.

They feed on carrions, and are found in the grasslands, swamps and forests (Coast and Amazon regions). 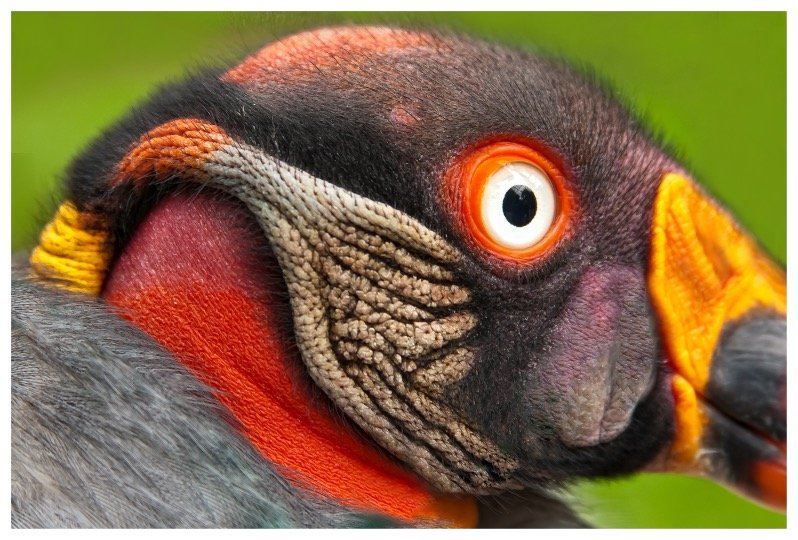 What Is The Appearance Of A King Vulture?

All other vulture species are different from the king vulture. It is not only one of the largest, but also one of the most colourful vultures.

An adult king vulture is predominantly white with grayish-black feathers on the ruff, wing coverts, and tail, in contrast to other vultures that are normally black or dark-colored.

Baby Eagle: All The Facts, Care, and Pictures

The bald neck and head of the king vulture, like that of all vultures, are featherless to prevent bacteria and blood collection when feeding.

The bald head of the king vulture, however, is stunning with a rainbow of colours including red, yellow, orange, purple, and blue, unlike those of other vultures.

Below the large nostrils, a brilliant orange, fleshy wattle droops. The king vulture’s wattle does not fully grow until it is roughly four years old.

The vivid orange beak of the king vulture is large and strong enough to shred animal flesh. It also has red rings around its eyes, long grey legs, and large, sharp claws that act as a tight anchor while feeding. 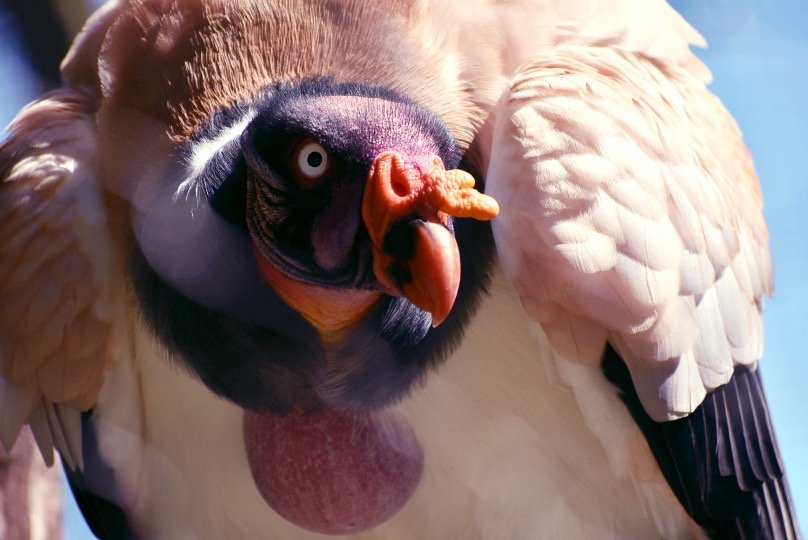 What Kind Of Food Do King Vultures Eat?

King vultures are carrion eaters which primarily devour the corpses of large deceased animals such as tapirs, cows, and oxen. However, if they are hungry, they will eat armadillos, fish, monkeys, sloths, caimans, and snakes, among other dead animals.

Only seldom, if ever, do king vultures kill their own prey. They don’t eat rotting food all of the time, either. They will usually find and feed on carcasses before the meat has a chance to rot.

They can, however, eat decaying meat without falling ill because they have stomach acid similar to battery acid, which digests rotting meat far better than humans.

Despite the fact that we humans find the idea of eating dead animals revolting, king vultures (along with other scavengers) play a crucial role in the environment. Rotting carcasses would foul up the environment and spread infections that are dangerous to humans if they weren’t there.

What Is The Height Of A King Vulture?

The king vulture is the third-largest of the New World vultures, standing 28 to 32 inches tall (71 to 81 cm). Females are larger than males. 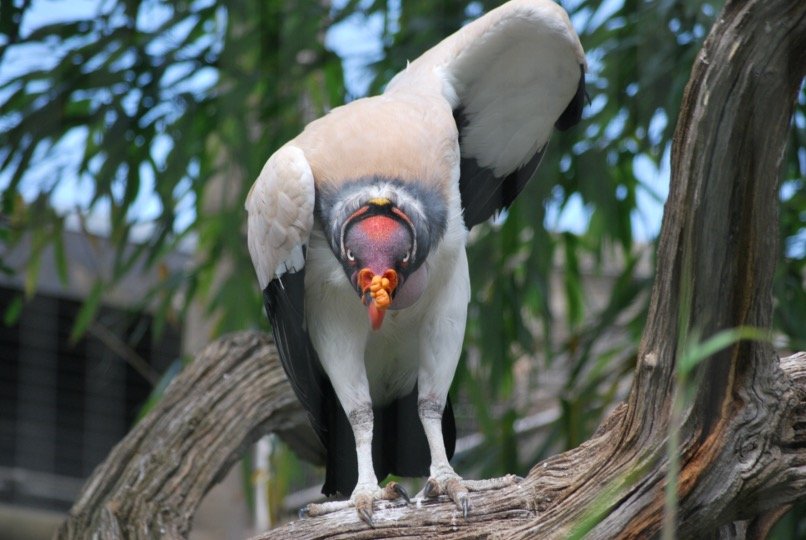 What Is The Weight Of A King Vulture?

Which Vulture Is The Most Colourful?

What Is The Wingspan Of A King Vulture?

How Good Is The King Vulture At Flying?

The king vulture can fly as well as some other vulture species, and even higher. Because of its huge size, it relies on thermal air currents to climb and glide, saving energy by avoiding the need to flap its wings. As they dive down to cadaver locations, they can likewise plummet at high speeds. 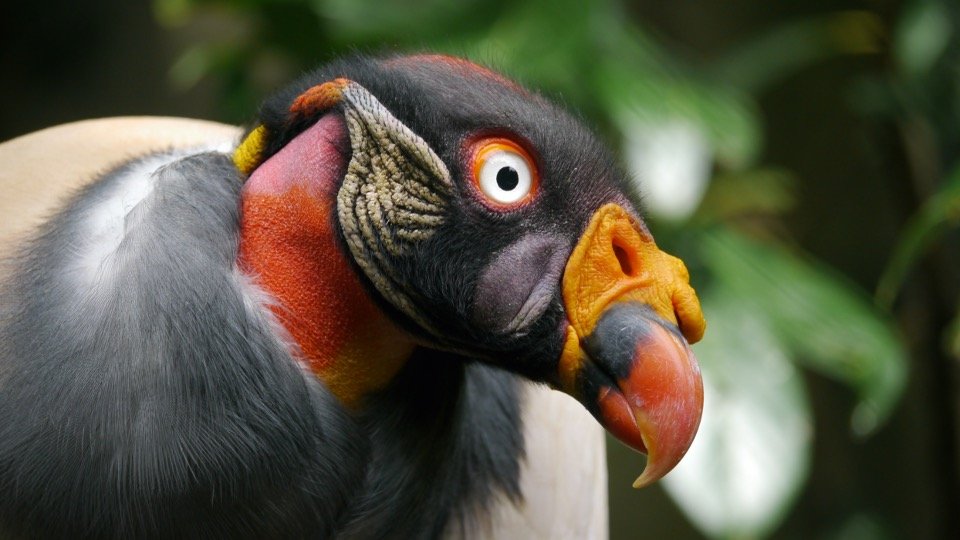 Is It True That King Vultures Migrate?

Vultures do not migrate, and king vultures are not one of them. Instead, they spend the entire year in the same vast area.

Where Does The King Vulture Live?

From Ecuador and Brazil to Bolivia and Paraguay down to northern Argentina, the king vulture can be found in Mexico, Central America, and much of South America.

What Is The King Vulture’s Natural Habitat?

Savannas, wetlands, grasslands, and dense tropical forests are among the areas where king vultures can be found. They either live alone or in tiny, close-knit families. They are most commonly observed perched in the tree canopy, soaring above the trees in search of food, or basking with their wings spread. They may even hang out in village dumpsters, though this is uncommon.

Where Do King Vultures Lay Their Eggs?

The construction of a nest by king vultures isn’t particularly labour intensive. They build nests on the ground or in natural holes like hollow tree logs or rock crevices. One of the most interesting king vulture facts is that these birds intentionally stink up their nests to deter predators. 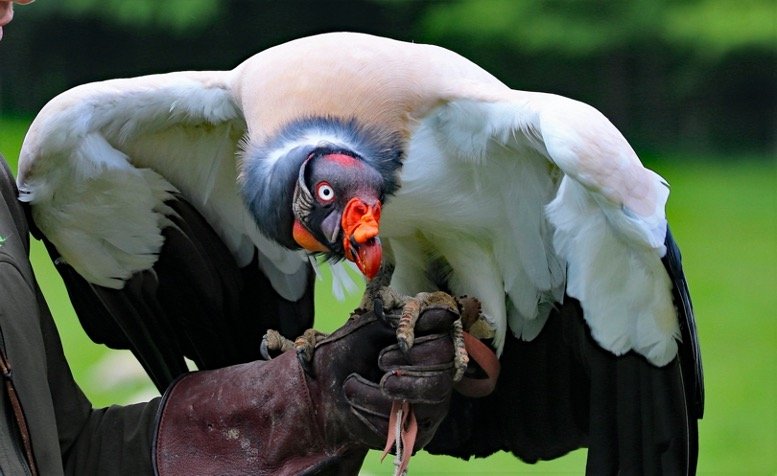 What Are Their Methods For Accomplishing This?

Their food is regurgitated in or around their nest.

How Friendly Are King Vultures?

Despite their huge size and razor-sharp beaks, king vultures are rarely combatants. Most of the time, there is no need to be aggressive because most other vultures are aware of their presence. When an Andean condor tries to start a battle, the king vulture normally retreats rather than fight.

What Is The King Vulture’s Level Of Dominance?

What Is The Origin Of The Moniker “King Vulture”?

What Is The Average Lifespan Of A King Vulture?

King vultures can live up to 25 years in the wild. They may live a few more years in captivity.

What Does A King Vulture Eat?

Large cats, such as jaguars, are the major predators of adult king vultures, who frequently attack them while they are eating on a cadaver. When the parents are away from the nest, snakes are known to feast on the king vulture eggs. Other hazards to these vultures include those listed below. 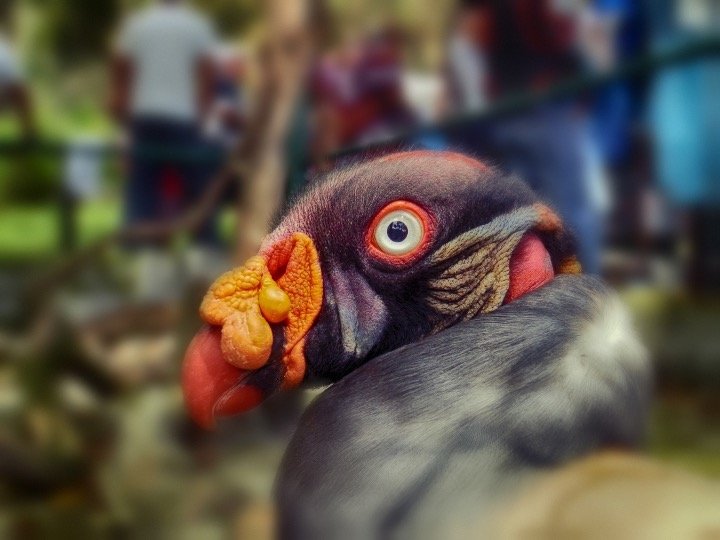 Is It True That King Vultures Are Extinct?

No, king vultures are still alive and well. They may become extinct in the near future if conservation efforts are not stepped up.

Is The King Vulture A Threatened Species?

The king vulture is not a threatened species. The IUCN Red List classifies it as “Least Concern,” indicating that it is not in imminent risk of extinction. However, because of human activity, habitat damage, poaching, and a lack of food, king vulture populations are dropping in portions of their territory.

Is A Carnivore A King Vulture?

Yes, it is a carnivore, which means it eats meat. It survives by scavenging animal carcasses for food.

What Are The Hunting Habits Of King Vultures?

King vultures hunt by perching high in the treetops, keeping an eye out for other scavengers gathered around carcasses. They have good vision but a bad sense of smell. They swoop down and scatter the other vulture species when they see a group of black or turkey vultures in one place. The king vulture’s beak is more sharper than other vultures’, and it can rip open strong hides that other vultures can’t.

What Is A King Vulture’s Latin Name?

King vultures belong to the class Aves, order Accipitriformes, and family Cathartidae. Its genus is Sarcoramphus, and its species is S. papa.

What Are The King Vulture’s Other Names?

The king vulture is known as the “King John crow” in Belize. It was given the name “white crow” by Spanish explorers in Paraguay. The Aztecs termed the king vulture “cozcacuauhtli,” a combination of “‘cozcatl” (collar) and “cuauhtli” (vulture) (bird of prey).

Do King Vultures Have Lifelong Partners?

Vultures that mate for life are known as king vultures. Because they live for 20 to 25 years, a couple might expect to be together for 15 to 20 years. The dry season is when king vultures breed. They perform courtship displays that include tandem flying, wing flapping, circling, and hissing while on the ground. Between the ages of 5 and 7, they begin to build lifelong bonds.

When Do King Vultures Lay Their Eggs?

When female king vultures reach sexual maturity, which occurs at the age of five, they begin laying eggs.

What Is The Average Number Of Eggs Laid By A King Vulture?

During the dry season, king vultures lay eggs once a year and breed.

What Is The Average Number Of Eggs Laid By A King Vulture?

A solitary cream-colored egg is laid by the female king vulture. For about two months, both parents alternate incubating the egg. They will lay another egg if the first one is damaged. After the chick hatches, both parents will work together to feed it and keep an eye on it.

Because it lacks a syrinx (voice organ), the king vulture’s call is limited to grunts, croaks, whistles, and bill-snapping, which it uses as a warning to anybody approaching its nest. This vulture also makes noise with its wings. It creates a whistling or “whooshing” sound with its feathers when it dives into the air.

Do King Vultures Make A Lot Of Noise?

No, King vultures are usually silent birds because they lack a vocal organ.

King vultures, like other birds, can carry diseases, including the West Nile virus, which is spread by infected mosquitoes. Their droppings have the ability to carry germs, fungus, and parasites that can cause serious infections like salmonella, histoplasmosis, encephalitis, toxoplasmosis, and meningitis, though this is quite rare. Because most king vultures avoid human environments, there is little risk of contracting a disease from them.

Could You Please Tell Me Where I Can See A King Vulture?

When confronted, king vultures are wary of humans and flee rapidly. They can be found in zoos all around the world if you want to see them up close. They can be seen at Ecuadorian zoos such as the Quito Zoo and the Zoo el Pantanal. Exploring Ecuadorian national parks such as Cotopaxi National Park and Yasuni National Park is a fantastic way to see king vultures in the wild.

The young king vulture chicks are defenceless and covered in grey downy feathers when they first hatch. They can squirm around and implore their parents to bring them food the next day. They can peck and preen themselves by the third day. They learn to walk and explore their nests around the age of one month. They fly for the first time at around three months.

What Do The Chicks Of King Vultures Eat?

Mom and dad king vultures will bring food back to the nest in their bellies after the chicks have hatched, which they will regurgitate for the chicks to feed. The babies will consume meat directly from their parents’ beaks as they get older.

How Do King Vultures Keep Their Feathers Clean?

King vultures, believe it or not, are meticulous cleaners. They will fly (sometimes considerable distances) to designated bathing places in rivers to wash and preen their feathers after feasting on carrion. They also like to dry their feathers by sunbathing in the sun.

Do King Vultures Urinate On Themselves?

King vultures do, in fact, urinate on their own legs. This may appear revolting to us, but for these birds, urohydrosis is a vital function that allows them to regulate their body temperature. They may overheat and die if they are unable to do so.