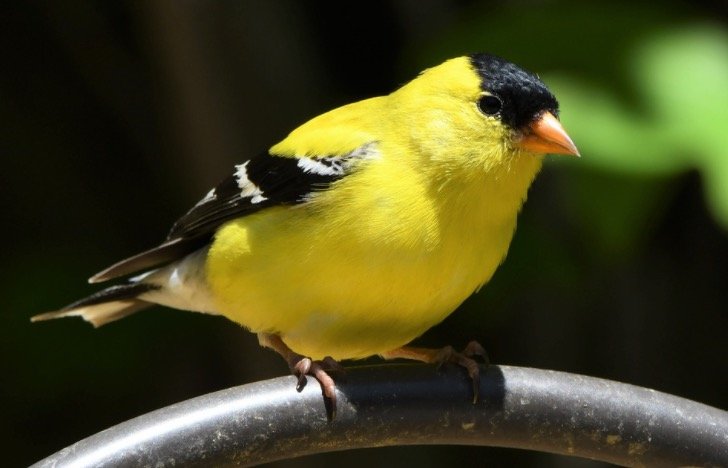 Iowa State Bird: All You Need To Know

Iowa is the 26th biggest state in terms of land area and the 31st most populated in the United States. It is made up of thick woods, marshes, and natural lakes. But what is Iowa state bird?

In 1933, the state of Iowa designated the American Goldfinch (Carduelis tristis), commonly known as the eastern goldfinch, as its state bird. The little yellow canary bird with a short, cone-shaped beak and a short, forked tail became Iowa’s favourite bird for staying in the state even during its cold, harsh, snowy winters. Iowa, like the bird, shown fidelity. 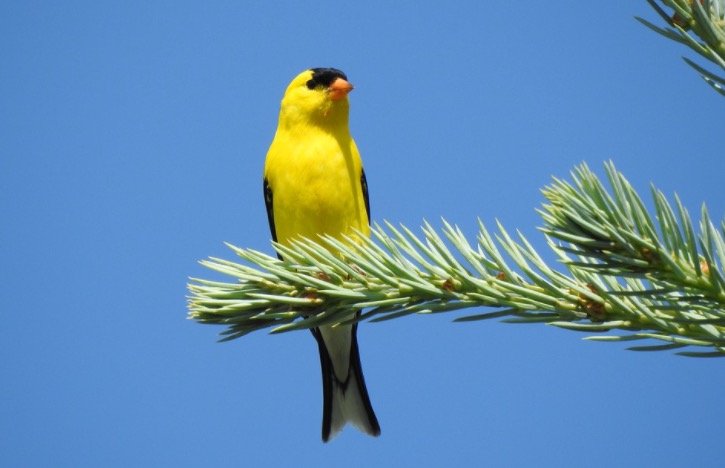 Why is the American Goldfinch Iowa State Bird?

Because it committed to spending the full year in the hard Iowa climate, the Corn Official of Iowa picked the extremely faithful American Goldfinch, commonly known as a wild canary, as its state bird.

Most songbirds go south during the winter, but the wild canary routinely entertains Iowa residents with its singing. The Hawkeye State rewarded such devotion by naming it the official bird.

This bird consumes allergy-causing plant seeds like as ragweed, as well as dandelion, sunflower, and evening primrose seeds, as it does in other states. It doesn’t hurt this small bird instead helps manage allergies and aids gardeners with weed control.

When did the American Goldfinch become Iowa State Bird?

The state of Iowa did not designate its official bird until March 22, 1933, during the Iowa Legislature meeting. The American Goldfinch is the state bird of Washington and New Jersey. 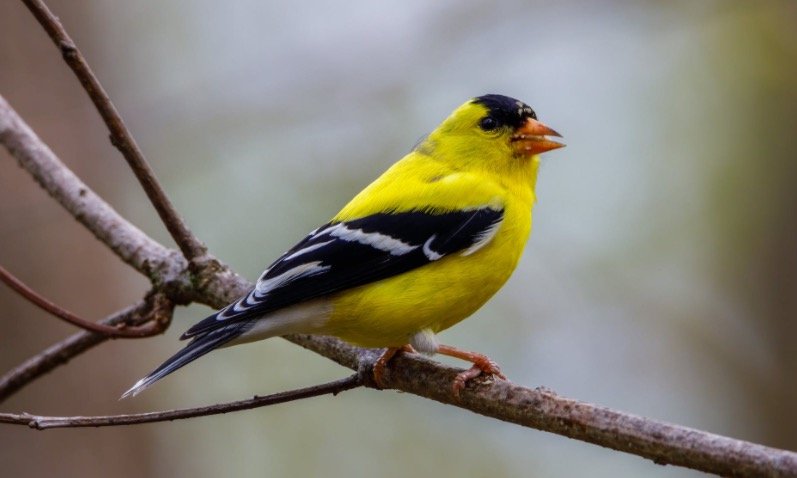 These brilliant yellow birds may be seen across Iowa. They may be seen from afar all year, since they retain their plumage in the spring and summer. Male American Goldfinch has a black beak and forehead.

The female has olive-yellow feathers with a brown tail and wings. The male undergoes modifications over the winter, becoming the same hue as the female. Both sexes reach a maximum length of around 4.25 inches.

The male’s breast and upper part are yellow, as is the female’s, while the male’s rump is white. Both sexes have pale legs.

The American Goldfinch is 4.25 inches long from head to tail. It has a wingspan of 7.5 to 8.7 inches. These little birds are only.39 ounces to.79 ounces in weight. 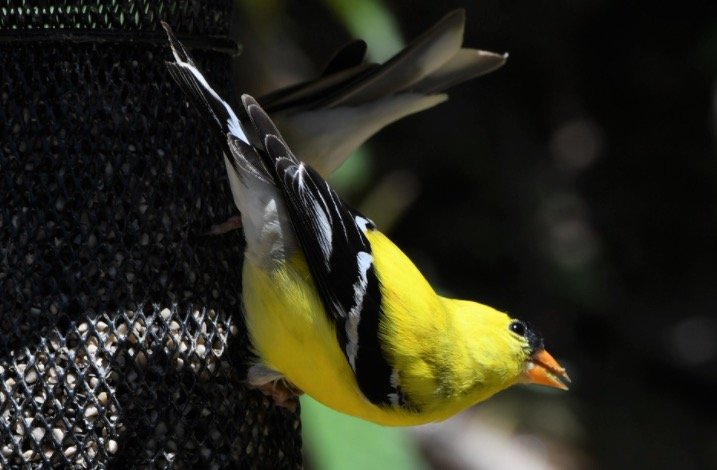 How do Iowa State Bird behave?

During the day, the American Goldfinch stays active by singing and hunting for food. This energetic tiny bird forages for food with its partner or in a small group. Canaries are life partners. Both sexes sing until they have children.

When the baby American Goldfinch moult, the mother stops singing, but her youngsters begin to sing at the age of six weeks. Canaries sing a rapid-fire, high-pitched song that sounds similar to the rat-tat-tat of a machine gun being fired.

Many canary melodies, in fact, serve as inspiration for laser gun fire in computer games. Males and girls must attain the age of maturity before singing on a regular basis. Despite being educated at an early age, these birds do not begin performing until they are roughly nine months old.

Canaries, like humans, can learn in certain ways. A person can teach a canary to sing if it does not have its parents to educate it. Even an adult canary that does not sing can be taught to do so. The American goldfinch is another kind of bird that disproves the concept of bird-brained behaviour.

These intelligent avians can learn to sing songs well into maturity and even learn from different species. Canaries are excellent pets. However, you should not attempt to capture a wild canary.

Rather, get a canary from a pet shop, since these birds were intended to be kept as pets. If you want your canaries to live outside, you can attract them using a bird feeder.

Because this is a favourite meal of canaries, stock it with sprouted seed. Birds raised inside have a lifespan of nine to ten years, however wild birds may live for up to sixteen years. 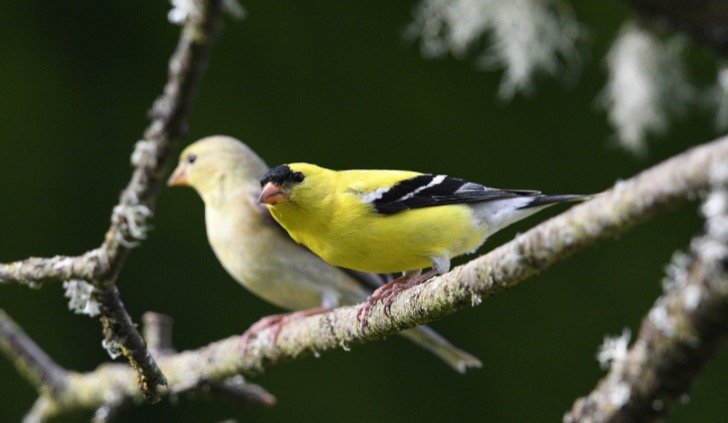 American Goldfinches raise their young in nuclear families. These monogamous birds are life partners. Once they’ve mated, they make a nest together, generally out of milkweed, thistle, and other fibrous plant life, as well as sticks and twigs.

They may mate up to three times throughout their lifetime, with each female bird’s pregnancy resulting in many eggs. The number of eggs in a clutch varies from two to seven every pregnancy. This indicates that a single couple might have up to 21 children.

The American Goldfinch prefers to spend the full year in the same environment. They want to remain in their new house and raise their family there. Their nesting season lasts from late June until early July. Their incubation period is around 15 days.

When young birds reach adulthood, they “fly the coop.” They leave their parents’ nest and return to the same location to reproduce more canaries. 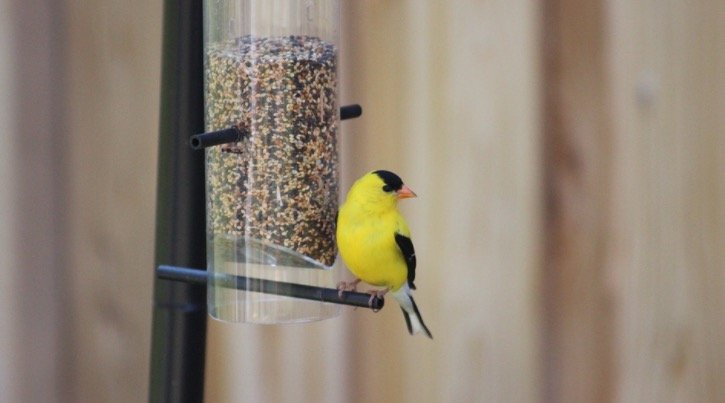 What do American Goldfinches eat?

Canaries, like many other wild birds, feed on weed seeds. They devour the seeds from the materials used to construct their nests. This usually refers to thistle seed, although there is also a lot of ragweed seed.

You may attract these lovely creatures with their favourite seeds by placing a bird feeder in your yard. They are particularly fond of nyger seed and sunflower seeds. Most feed or lawn and garden businesses sell seed mixes designed to attract these birds.

These birds feed in the wild by either searching the ground or flying into a bush or shrub to search its branches.