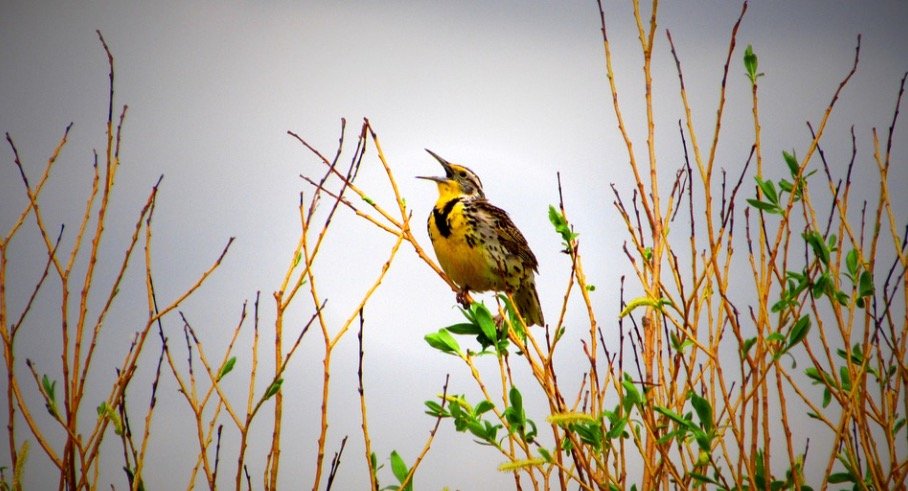 Kansas State Bird: All You Need To Know

Kansas is the 15th biggest and 35th most populated state in the United States. It is famous for its vast plains, rivers, and state parks. The American Buffalo is the official mammal of Kansas, but what about the Kansas State Bird?

The Western Meadowlark (Sturnella neglecta) was designated as Kansas’s State Bird in 1937. With its contemplative, reflective expression, the medium-sized, vividly coloured, streaked, spotted meadowlark bird seems to examine everything that Kansas has to offer from its perch in the state’s vast grasslands. This carnivore prefers bugs but will eat seeds and berries if necessary. 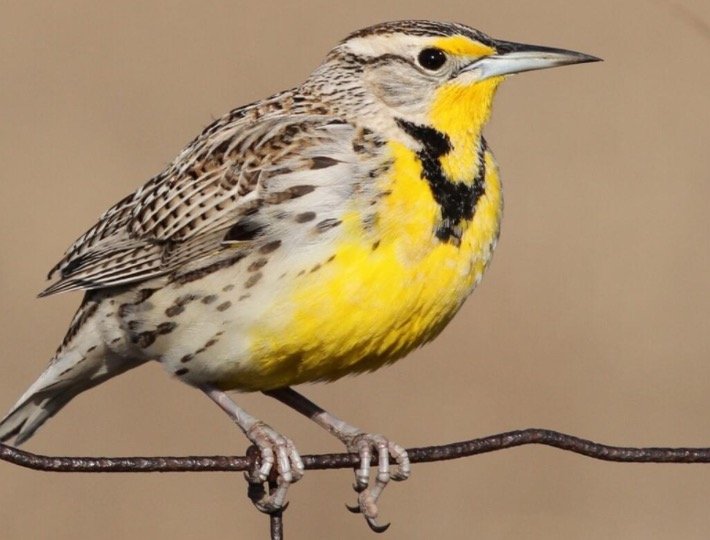 The state bird of Kansas, the Sunflower State, is the wild meadowlark. This bird settled in the state’s sunflower fields and resounded with the children of the state. The vivid yellow of its tummy and breast nicely resembles the sunflower petals.

The Western Meadowlark was chosen as the State Bird after a poll of the state’s 121,000 schoolchildren by the Kansas Audubon Society. The meadowlark garnered 43,895 votes, while the Bobwhite and Cardinal were the closest challengers.

The state of Kansas did not designate its official bird until 1937. After the contest was completed and the schoolchildren’s votes were tabulated, the state legislature designated the bird as the state bird in legislation, making it a law. The Western meadowlark is the state bird of Kansas, Montana, Oregon, Nebraska, North Dakota, and Wyoming.

With its yellow-breasted feathers, this member of the blackbird family illuminates the grassy plains of Kansas. It has certain distinctive elements, such as a V-shaped black band. The beak of the Western meadowlark is black and grey.

Its feathers are tan and brown with black and white patterns. The Western meadowlark is 6.5 to 10 inches long from head to tail. It has a 16-inch wingspan. These little birds range in size from three to four ounces. 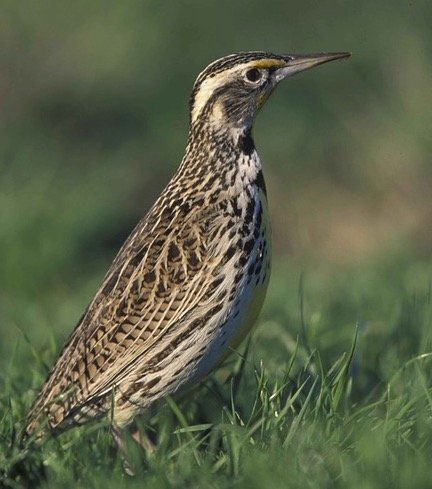 How do Kansas State Bird behave?

Meadowlarks are still active throughout the day. They go under shelter and remain silent at night. They won’t be singing late at night. These birds build their nests amid scanty bushes and grasses on the ground.

They have developed their capacity to survive discreetly as the sun sets in the sky because they do not stay out of reach of predators. They are not found in woods or even dense bushes. The male western meadowlark establishes its mating territory before females of its species arrive. It might defend its area for up to a month before females come.

The male and female utilize song – mating calls – to meet, as do many other birds. Their tweeting has been characterized as flute-like or whistle-like. While building her nest and laying eggs, the female of this species coos a “tee-tee-tee” sound.

They find each other while the female collects nest materials, build the nest, and breed. Unlike other birds, male meadowlarks mate with two females every season. These hard-working fathers deliver food to both nests and spend time with both of their families, all while helping to raise the chicks.

When the youngsters hatch from the eggs, their adoring parents jealously defend them. However, if a person comes, they will abandon a nest containing eggs. The incubating eggs are left behind, therefore you should never touch a meadowlark’s nest, and you should never let your kid do so either.

Other intrusions on their privacy will be chased away by the male meadowlark, regardless of the predator’s size. To defend his young, the father bird performs this watch job at both nests. When you glance up in Kansas, you’re likely to see a territorial male Western Meadowlark defending his brood.

These birds are known to sit on electric or telephone lines, fences, or poles. They can see a broad area at once from these heights and notice predators that may otherwise jeopardize their nests. 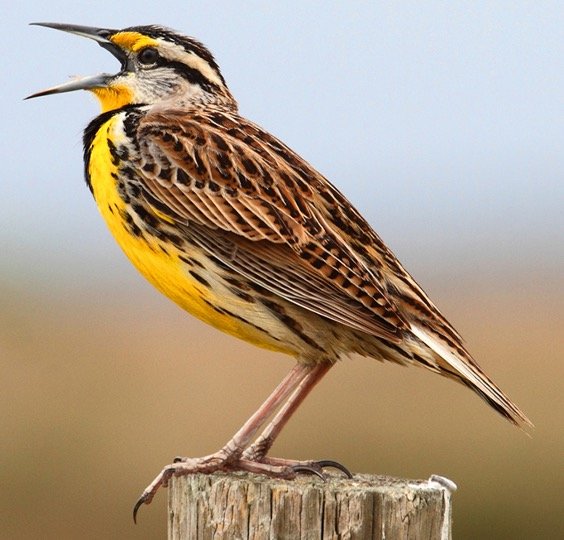 Despite the fact that males have two families, Meadowlarks establish nuclear families. These birds are monogamous, however they do not mate with the same female for life. They maintain two distinct domiciles and equally provide for both families.

This implies that the male of this species is always on the lookout for prey. They leave food at each nest, and the mother bird feeds the young birds. Their eggs incubate for around 13 to 16 days. When young birds reach the age of two weeks, they depart the nest.

Because chicks can’t fly yet, their parents must continue to watch over them while they explore the grassland. They start flying at the age of five to six weeks. This allows them to go deeper and create their own hunting territory.

They may decide to move. This migratory bird spends the winter in the southern states of the United States and Mexico. During the summer months, these birds may travel as far north as Canada. During late April or early May, the birds return to their summer home in Canada. 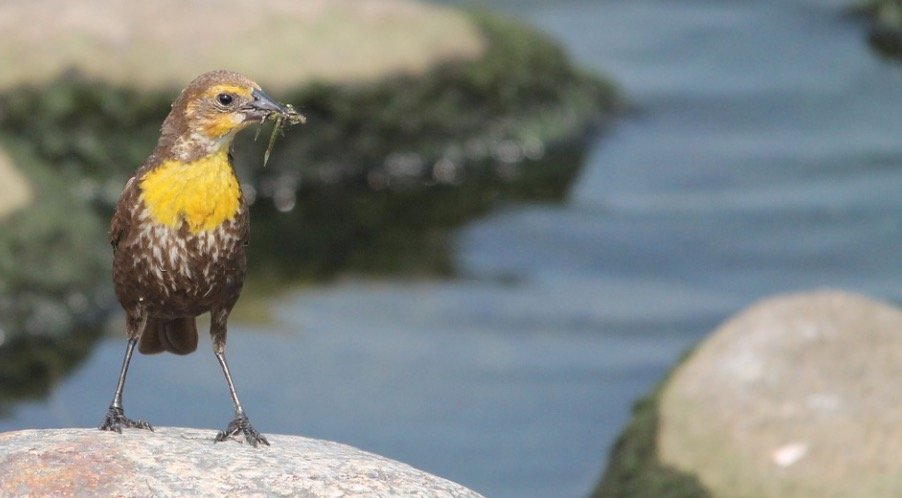 What do Western Meadowlarks eat?

Meadowlarks eat a variety of foods according to the season. Meadowlarks eat grain seed and berries. This gourmet bird of the blackbird family dines on grasshoppers in Kansas, but these birds also consume various insects in other states.