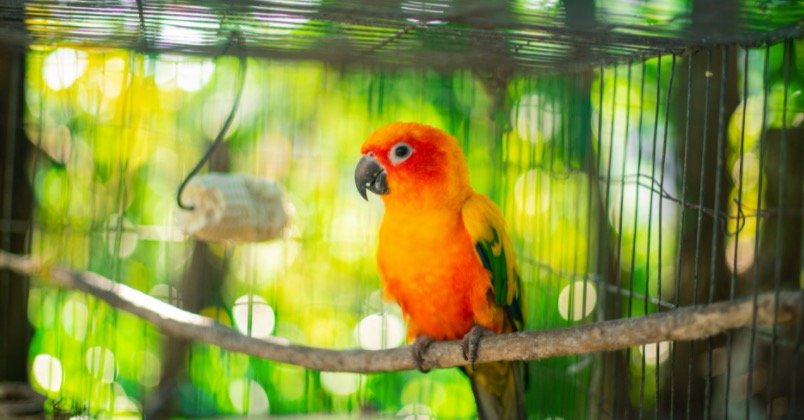 Carolina parakeet was very common once and can be seen easily, but due to several factors the population of the birds decreased rapidly, some factors are natural while most factors are human-induced.

The bird was last recorded at the Cincinnati Zoo in 1918 after which Carolina Parakeet was declared extinct after the death of the specimen. All the facts known about the organism are based upon the studies, completed by researchers on dead or captive specimens.

• Genus Conuropsis is categorized into two distinct species. However, what is the natural range of the subspecies is still not declared and it is a subject of debate but apparently, they do not overlap very much.

• Interestingly, the parakeet uses its beak as a third organ that helps the bird to navigate the branches and trunks of the trees. The species of parakeet was also a great climber.

• Carolina parakeet can produce loud noises and it can be very noisy. Sometimes, a person can hear the noise of their entire flock from miles away.

• The diet of Carolina parakeet also included some toxic seeds, he ate poisonous seeds of cocklebur. Thus it is believed that the birds can be toxic and can cause harm. It is noted by John J. Audubon that after the consumption of this parakeet some cats died.

• It is considered that the species of parakeet can be used as a potential candidate for de-extinction. The term de-extinction refers to the process of using DNA pieces to bring back an extinct species. In 2019, the complete genome sequence of the bird was sequenced. 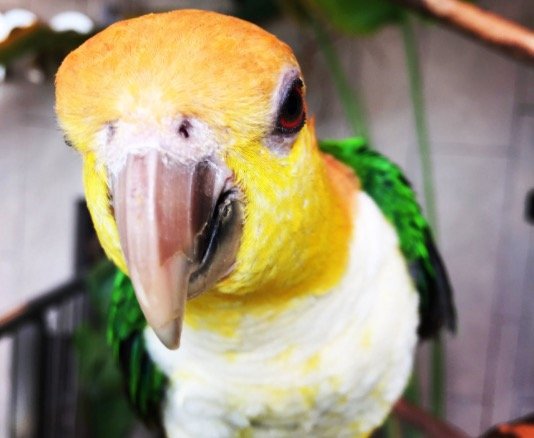 Once the bird was seen in some regions of the United States. The favorite habitats of the Carolina Parakeet were swamps and rivers. However, its true range is still under debate but some researchers believe that the range of its natural habitats is extended from Colorado in the west to New York in the north and east.

However, the map declaring its natural habitats is only based on some historical insights and evidence. Another map restructured in 2017 suggests that the range of the bird is more constricted.

Probably one sub-species of Carolina has its range in Florida and its surrounding coasts but other subspecies were transferred toward the interior parts of Ohio, Kansas to the United States.

The species build their nests with the help of basic plant materials in a hollow small tree.

Conuropsis carolinansis was the scientific name of the Carolina parakeet. The species name carolinensis was derived from the word Carolina and it is also a Latin version of Carolina.

The species of the genus conuropsis is also the last live species of these parakeets. It is believed that the word conuropsis was derived from the term conure. The term was also used to describe several small to medium-sized species of parrots.

A single word is used interchangeably by some persons for the same things, but apparently the word ‘conure’ is actually a bird-keeping word more than a scientific term. The family of true parrots named Psittacidae also included parakeets. The well-known scarlet macaw is also a member of the family.

It is believed that the Carolina parakeet was one of the most colorful birds residing in the United States. Their body is very colorful. The body consists of bright green and yellow plumage and they have red and orange plumage surrounding their face.

The males were relatively larger than females. The length of the Carolina parakeet is 14 inches with their tail and some feathers are also present on their body. A large, sharp beak is also present in Carolina Parakeet.

Their beak is well adapted for cracking nuts and seeds. The birds prefer to travel in groups of 100 to 1000 birds. They are also considered migratory birds but most of the time the birds stayed within 30 miles of their home range.

However, for survival in winters or in harsh conditions, the birds may transfer slightly. The birds have a significant behavior of social cohesion, which is a significant aspect of the birds. The parakeets are also known for some surprising acts of preening and scratching that they do to reinforce their bonds and keep clean bonds with each other.

The birds prefer to forage for food during dawn and dusk, while they spend most of the hours of daylight resting, roosting, and bathing.

Carolina parakeets emit a harsh call to aware other group members in the presence of any predator. The birds make loud noises while the flight but they remain silent during roosting.

Carolina parakeet is an omnivorous organism. The bird uses its claws and beak to tear off the pieces of its food and flesh.

What Does Carolina Parakeet Eat?

Carolina is an omnivorous bird. The diet of the bird is generally made of fruits, seeds, and insects. Many fruits and seeds such as beech, elm, sycamore, maple, oak, and pine are consumed by these birds.

They also eat several insects that also complete the protein requirement in their body. Their favorite food includes cocklebur seeds, which may be poisonous. To add some amount of salt to their diet. The birds also eat salt licks and consume saline water also.

The bird is totally extinct in the wild. Deforestation and hunting are considered as primarily responsible factors for their extinction. It is suggested that their end begins with the arrival of European settlers.

However, several natural factors such as the spread of disease and other natural calamities also played a significant role in their extinction. The species become more susceptible to negative shocks after declining its population.

What Eats the Carolina Parakeet?

The bird also has several predators such as hawks, eagles, and other predatory birds that prey upon the species of Carolina. Sometimes, raccoons, skunks, snakes, and squirrels also feed on their eggs and chicks.

At that time, the information regarding the bird’s reproductive habits is not documented properly. Thus, according to some sources, the birds were monogamous but there are also some reports, which claim that Carolina shared her nests together with several males.

Thus, we only know that the birds mate in spring and it lays up to 2 to 5 eggs at a time. At the time of birth, the plumage was fully developed in chicks that are green-colored and its underparts are pale-colored.

The full-flight feathers develop after 20 days and the birds become ready to fly. Both the parents play role in the parenting of chicks and raise them together.

The young parakeet reaches sexual maturity at the age of one year. They have a relatively long life span and can live up to 30 years in captivity.

However, the species is now fully extinct. Deforestation, hunting, and other factors are some responsible factors because of which they undergo a precipitous period of decline.

After their decline, their population cannot recover and they become extinct. In 1918, the last specimen of this species died and they were declared extinct.