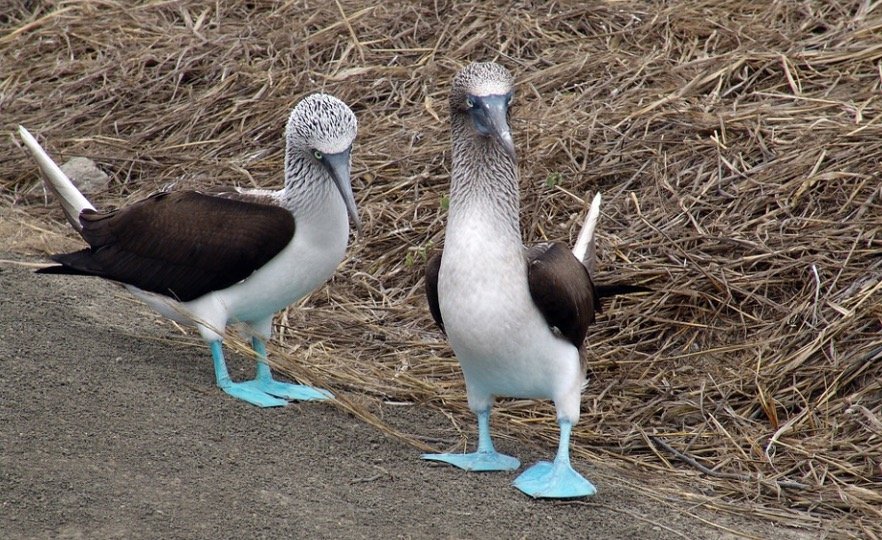 The booby is a sea bird that belongs to the family Sulidae. The coastal regions of Central America and South America are the major habitats of sea birds. Anchovies, Mackerel, Sardines, and squids are some organisms, which provide food to booby thus they are called carnivorous birds.

Booby is a great flier and also has good driving skills, but they appear awkward while walking. The birds have feathers and their life span is up to 17 years in the wild. 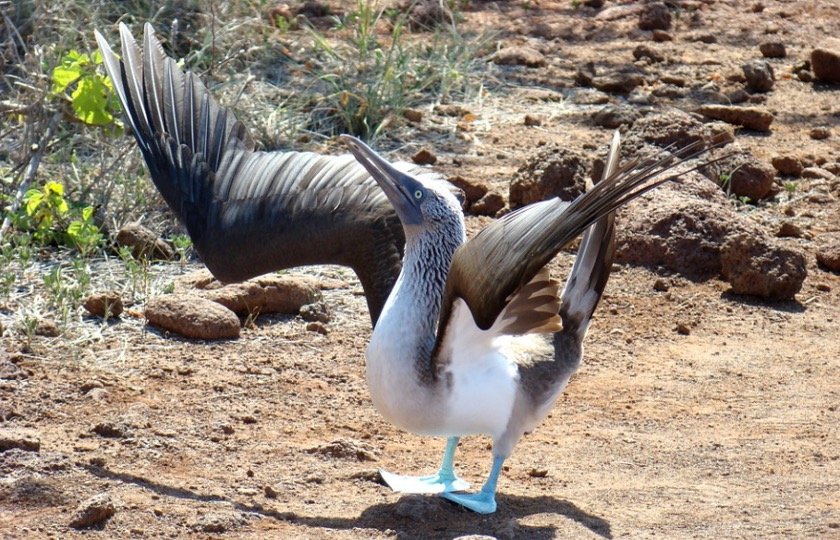 • Booby is a monogamous bird that spends its whole life with a single partner.

• Booby lives in groups or columns that may contain around 200 booby birds.

• In its appearance, the booby looks similar to the gannet.

• The Booby has deep blue or purple-colored feet when it is getting sufficient nutrients especially vitamins.

Scientific Name of the Booby

Sula nebouxii is the scientific name of blue-footed Booby. The name of the bird is derived from the Spanish word “Bobo” which means clownish or foolish.

The name ‘bobos’ was given by the Spanish sailors when they observe them while walking and moving around land because these feathered organisms are looking awkward while moving.

The booby also lands on Spanish ships sometimes where they can be caught by the sailors easily to catch them, which is also considered their foolishness. The birds belong to class aves. Booby is a seabird, which is further classified into six species. 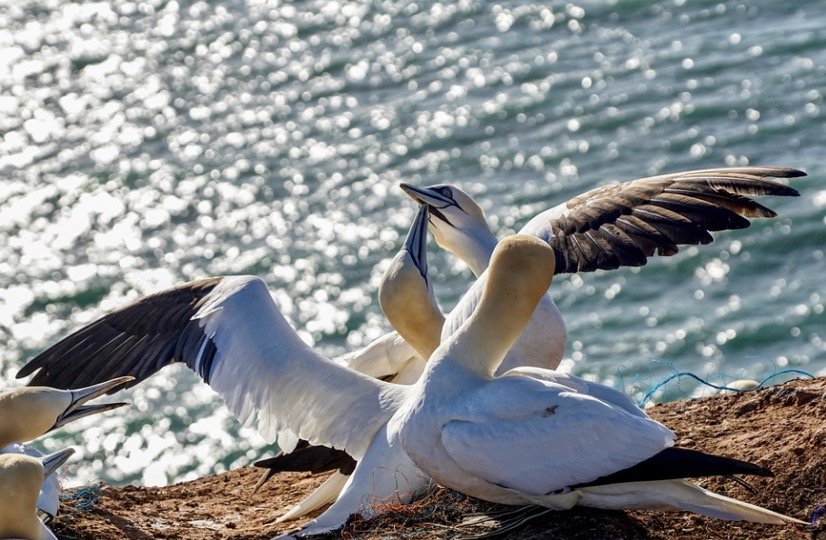 Appearance and Behaviour of the Booby

They are feathered creatures that have brightly colored feet, which are blue colored. However, at birth, they do not have blue or purple feer instead they are born with white-colored feet. When the baby reaches the age of six months, their feet turn blue.

Blue feet are not present in the Brown Booby. The brown booby is famous for its dark brown feathers occur in its back and head. The masked booby has another name of masked gannet. It gets its name due to its appearance similar to a gannet.

Both the species consist of brown color on their wings and tail and have white feathers. The feathers of a masked booby cover its face as a mask thus it gets its name ‘masked booby’. Another species known as the Red-footed booby is famous for its bright red feet.

The bill of the bird is pink and blue colored, which separates it from other species of booby. The Peruvian booby also consists of brown feathers that cover its wings and back. The underside of the booby is white-colored. The beak contains a combination of pink and orange colors.

The booby has intense eyes of yellow color. His beak is serrated with sharp and rough edges. The bird uses its beak in grabbing slippery fish for food.

The weight of the bird is up to pounds and the length of their wingspan is around 5 feet and 7 inches. Booby is a social bird that lives in groups and is commonly spotted in colonies. A colony may comprise dozen to hundreds of individuals.

The predators may discourage by the huge number of birds in a colony and they cannot enter the area to try to steal. Booby is a noisy bird. They produce various sounds such as whistling, honking, and grunting.

So we can guess that the animals have colonies with a very loud place to visit. Curiosity is one of the considering qualities of a red-footed, blue-footed, and other booby species. The bird does not seem to be frightened when it is approached by humans.

Habitat of the Booby

Booby is usually found in tropical regions. Central and South America are the habitats of a blue-footed booby. It can be spotted on the western coasts especially. The Galapagos also has a population of these sea birds.

The brown booby lives in the Caribbean, the Indian and Pacific oceans, and the Gulf of Mexico. The large stretches of the Pacific Ocean are the habitat of the masked booby. 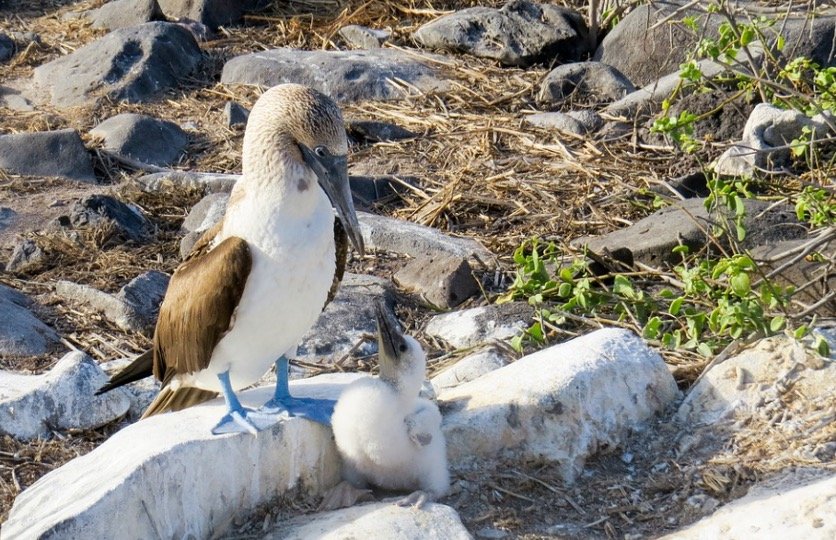 The booby spends nights in the colony and lives in the land. It prefers hunting and fishing during the day by flying over the ocean. However, the birds are great fliers but the way of walking is awkward.

They can dive up to 80 feet or higher in the air by pulling their wings flat when they spot any fish. The birds are also able to travel around 50 feet beneath the water surface. A flap of skin covers the nostrils of the booby that allows them to dive and also restricts water from flowing up their nose.

It is believed that a third eyelid is present in these sea birds, which closes when the booby dives underwater. Thus it can be considered that the booby is a champion diver with natural goggles and a nose plug. The sea bird makes all these adaptations for diving safely with high speed.

Diet of a Booby

Booby is a carnivorous animal. The sea bird prefer to hunt in groups thus all the birds get food when they spot any school of fish.

However, the adult booby birds do not face the threat of predation as they do not have any natural predators but the chicks and eggs of these seabirds are consumed by several animals such as large birds, owls, and snakes.

What Does the Booby Bird Eat?

Several fish species including sardines, anchovies, and mackerel are consumed by booby. The female booby can also dive deep in water even they can dive deeper than males. Thus, the fishes captured by females are relatively larger than the ones captured by males.

Predators and Threats of Booby Bird

The young ones and eggs of the booby are vulnerable to predation while adult birds are safe. Their young chicks and eggs are sometimes consumed by snakes, owls, and other organisms by stealing them from their nest.

Another threat to booby is imposed by humans that is water pollution. Also, EI Nino and other weather events are the responsible factors for the decreasing population of booby because these events decrease the population of clupeid fish, which is a major diet of the sea bird in Galapagos islands and other parts.

The IUCN list for threatened species has listed the blue-footed booby as “least concerned species” as it has a stable population now.

The months from June to August are the mating season of the blue-footed booby. During this period, the male booby tries to attract the mate by getting her attention. The male bird uses his bright blue feet and feet with a purple border.

This sign is considered as a sign of a healthy bird thus it is also considered a good partner. To get more attention, a whistling sound was made by males. Once the female chooses her partner, they remain together for their whole life.

The nests of the booby are made on the rocky ground along the coast. They build a bowl-shaped nest. The nest is covered by the border of feces around it at the time of hatching the eggs. Because during this time both the partners relieve to take care of their young.

The eggs are protected by both mother and father by their colorful feet and they also take turns for this. The other member finds food for both when one member is guarding. The featherless chicks born after the eggs hatched.

They are dependent on their parents and both the parents take care of them. In the tropical environment, the chicks have another threat of burning in the sunlight because it is featherless. The young chicks are protected by the feet of their parents.

It is estimated by scientists that the population of blue-footed boobies in the Galapagos island is from 6000- 10000 individuals and 2000 masked boobies are residing on this island.

However, the population of these seabirds is decreasing in some areas but their population is stable now. They are listed as the “least concerned” species by the IUCN.