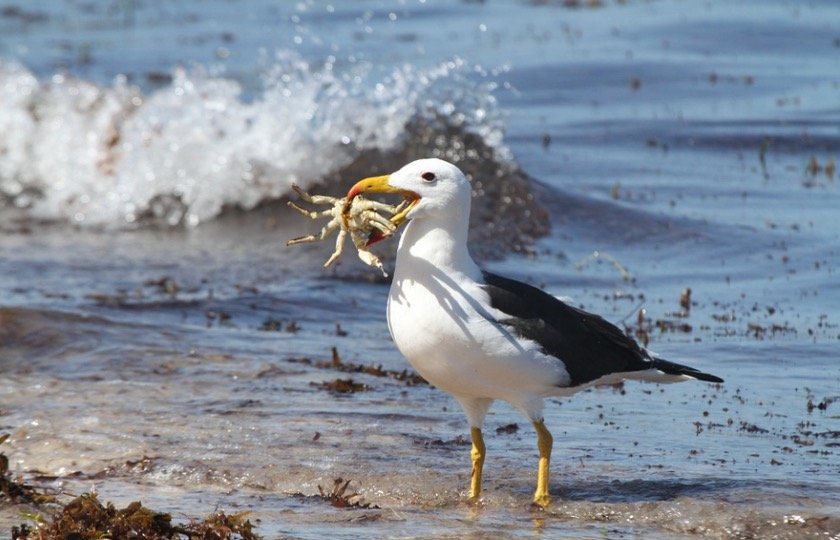 Scientific Name of the Albatross

Diomedeidae is the scientific name of the albatross. The name was given on the name of a Greek hero Diomedes, who may have participated in the War of Trojan. It is also said that the seabird sang upon his death.

The genus Diomedeidae consists of 13 to 24 species, thus their classification was a subject of controversy. Still, the debate is ongoing between taxonomists for the classification of the royal albatross.

Some taxonomists claim that the northern and southern species are different and some others count them as a single species. Along with the albatross, the family Procellariiformes also consists of petrels, shearwaters, and other seabirds.

It is suggested that probably the last ancestor of this family was alive more than 30 million years ago. 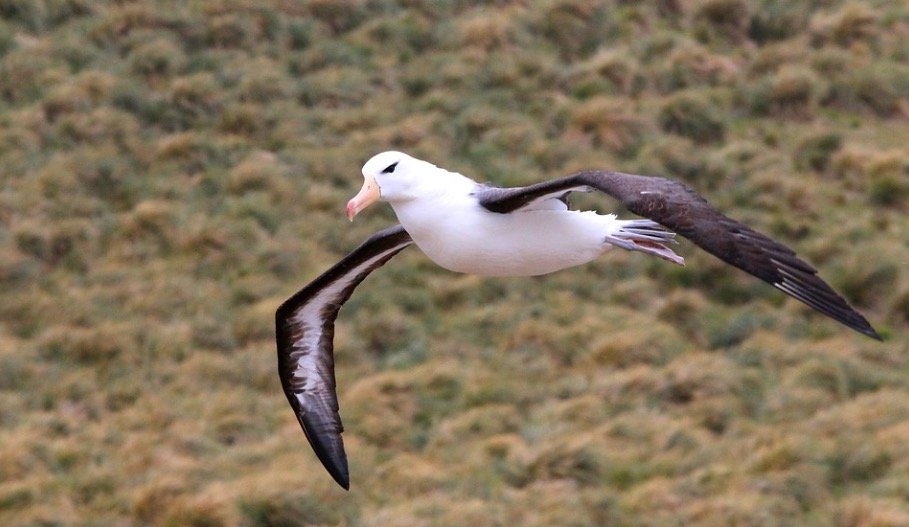 Albatross is a massive sea bird found in the ocean. They are colonial nesting birds that have large wingspans. The albatross is also known as the Mollymawk or gooney bird. The species is distributed in the Southern Hemisphere and North Pacific Ocean.

The albatross use their massive wingspan to fly above the waters. For many centuries, humans made various myths and folklores about these birds.

The seabirds have made several adaptations to deal with the difficult toll of long periods at sea. However, their number is declining very rapidly due to the competition for food with humans. 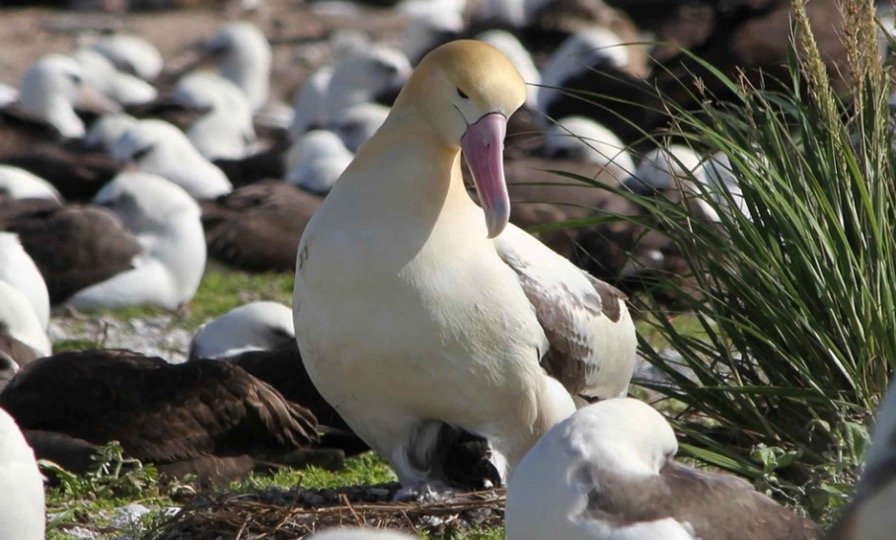 Humans made various myths about albatross. According to old folklore, the soul of a dead sailor remains in the albatross that was killed at sea. Depending upon the belief, the sailor could be a bad or good omen but besides these, people kill and eat them.

In 1798, a poet named Samuel Taylor Coleridge wrote a poem ‘The Rime of the Ancient Mariner, which was a major plot point for albatross. In this tale, an albatross was killed by the main character and then he face misfortunes continuously.

He is then forced by his fellow sailors to carry the dead bird around his head as punishment. The term “albatross around the neck” was originated from this tale. The word albatross is originated from the Arabic word al-qadus or al-Gattas, which means “the diver”. 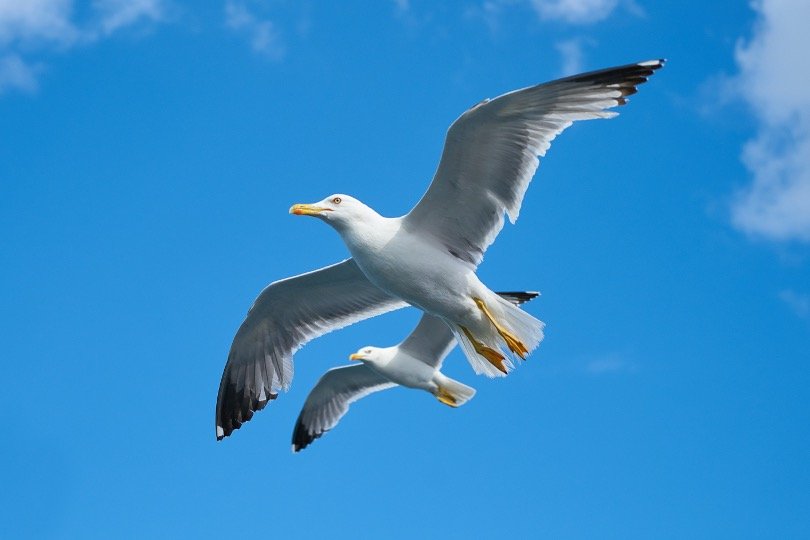 Later the word is adapted by Portuguese as Alcatraz and in English, this was absorbed as albatross. The bird is in near-continuous movement except for the breeding season. Every year, they travel for thousands of miles individually.

The seabird is also known as a goony bird for the funny way, it was named as it due to their grabbling on the ground. In ancient times, bird watching is very popular among people. Only in New Zealand, around 40,000 people are attracted by the colonies of the northern royal albatross per year.

The albatross contains a massive and strong body. The color of the bird varies from white, black, or grey however some species are found in a single color. They have a hooked beak of orange or yellow color that contains several horned plates at the end.

The tubes of the albatross helped it in measuring airspeed in flight. The massive size of their wingspan is the distinguishing feature of the albatross. It is considered that the great albatross or the wandering albatross is the largest living bird in the world based on its wings.

The size of this species is similar to a swan and the weight of the wandering albatross is around 22 pounds. The size of the wingspan of smaller species is 6.5 feet, which is relatively larger than most birds. 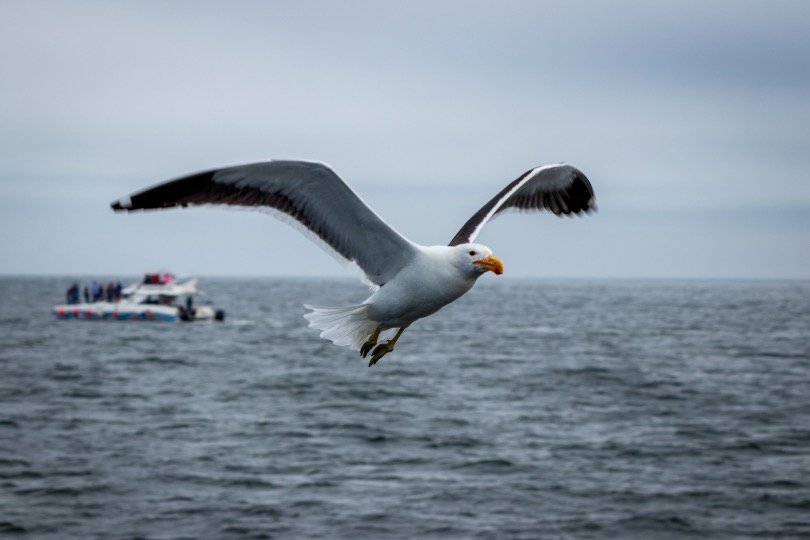 The wings of the albatross are flapped rarely thus they are very stiff and curved. These birds prefer to slide on the ocean winds continuously and use minimal movement.

They adapted this method to carry a lot of weight around and it also proves that the wind is necessary for them to fly. The interesting fact about them is they almost use no energy while flying.

Albatross made several adaptations to spend a long period in the sea. They can use minimum energy in flying as well as in floating on water. Although water is more vulnerable for albatross, they come down to feed and drink water.

They have a special organ that helps them to excrete excess salt from drinking water. The albatross are well-adapted for marine life but sometimes it rests on islands far away from the sea.

They come to the ground during the breeding season and gather in large colonies, whose density may vary among various species. It seems that they moved back to their natural birth colony.

The albatross are native to Antarctica, South Africa, South America, and the southern hemisphere around Australia. Previously, they are also widely distributed among the regions of the northern hemisphere but now only some species are found in regions of Alaska, California, Hawaii, Japan, and the pacific region.

The albatross face some problems traveling across the open ocean and consuming seafood and drinking saltwater of oceans. However, strong winds are necessary for their survival but in the areas where the winds have gaps, they face trouble.

Albatross generally feed upon the squids, krills, and school of fishes, and occasionally they eat zooplankton. The seabird also acts as a scavenger and feasts on dead carrion floating on the surface of the water. 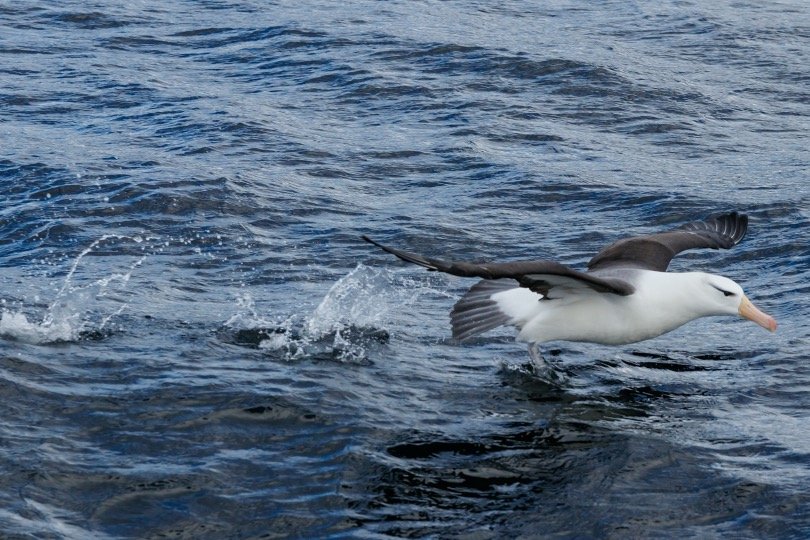 It also trails behind ships to eat their garbage. Unlike penguins and other marine birds, which are great divers, albatross can only dive up to a few feet thus they face difficulty in searching for survival food.

They search their prey from the air, and once they find it, some species can plunge them rapidly from the water and snatch it.

Threats and Predators of Albatross

Humanity is the other major predator of albatross. In the barren north, the albatross provides an important source of food thus it is hunted by the people residing there. The feathers of albatross are used in preparing valuable hats thus they are also hunted.

As a result of overfishing, the inadequate food supply is the biggest threat for the organism. Humans and albatross have various competitions between them for inadequate resources.

The marine pollution accumulated in the environment also affects the existence of aquatic organisms. Pollution makes its way up the food chain and results in slow or abnormal development, reproduction, and death.

Reproduction, Babies, and Lifespan of Albatross

After spending several months in the ocean, albatross moves to the islands and coastal areas far away from the sea during the breeding season. Albatross choose their partner with quite picky.

Most of the species form pairs for life thus they cannot take the chance to select the wrong partner. They use some elaborated dance and songs for communication about their sexual availability. It also includes calling, hunting, staring, and pointing.

The ritual must be perfected through years of trials and errors. Eventually, the young bird selects one partner from its potential mates. This all process is very essential for them and an integral part of their lifecycle. 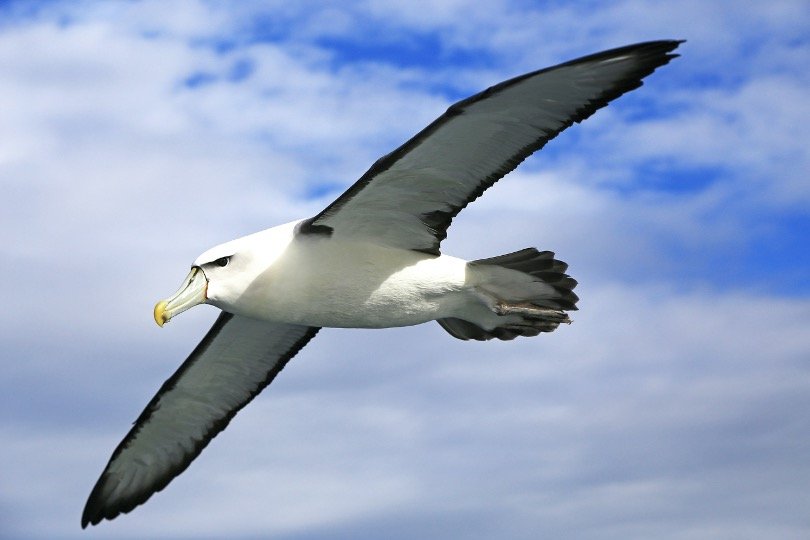 Generally, the albatross is set for life after selecting one mate. Even, they cannot break up if the couple faces difficulties in conceiving. They are very trusting towards each other because the bond is quite strong.

They do most of the activities together such as incubation, raring of eggs, and construction of large nests. They made nests by using grasses, soil, shrubs, and even feathers. Usually, they select a high area for making their nest from where they can approach multiple areas.

The female albatross produce only a single egg in a breeding season after mating and breed again in alternate years. They skip the year before the next breeding season. Young chicks depend upon their parents for feeding and other things because they are not well developed at the time of birth.

The protection and food gathering is optional between parents. They use a mixture of krill, fish, squid, and other oily substances produced in the stomach to feed the chick. The chicks develop very slowly because of food unavailability.

The chick becomes enough old to protect itself after some weeks. It takes 3to 10 months to fully develop and become able to fly and also starts hunting for itself. The young chick spends the next 5 to 10 years in the sea and returns to its colony when it reaches sexual maturity.

The albatross was neglected by humans for decades, which results in their bad shape at present. The IUCN red list of threatened species has listed them as critically endangered species. Almost every species of albatross is under some threat.

The Laysan albatross is found in the entire Pacific region that is its natural range. The species still remain in the wild and have around 1.6 million population of mature individuals and are considered as near threatened species.

Another species waved albatross and the Tristan albatross have a population of only a few thousand members and are listed as critically endangered species. In most of the species of albatross, the population is only remaining between 10,000 to 100,000 individuals.

For example, a species named, gigantic wandering albatross is listed vulnerable and has a population of only 20,000. It is believed by conservationists that for the rehabilitation of the albatross the management of fishery stock is necessary.

The steps should be taken for habitat restoration and banning chemical pollutants. The acting of a single country is not enough for this. It requires international efforts to conserve them because the albatrosses travel for long distances and have large territories.