Can Flamingos Fly? All You Need To Know 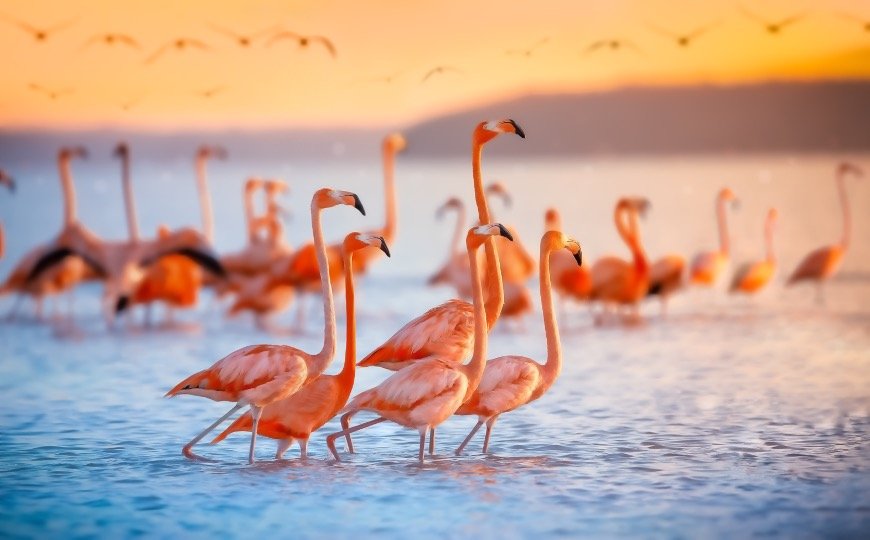 Flamingos are colourful and sociable birds that may be found all over the world. The majority of the time, you either see flamingos in photographs, movies, or even in person; they’re usually seen in big flocks or tiny groups standing in the water.

Can flamingos, on the other hand, fly?

Flamingos can fly in all species, with some reaching heights of up to 15,000 feet. Flamingos may go up to 400 miles (640 kilometres) in a single night, flying at a rate of approximately 35 miles per hour. 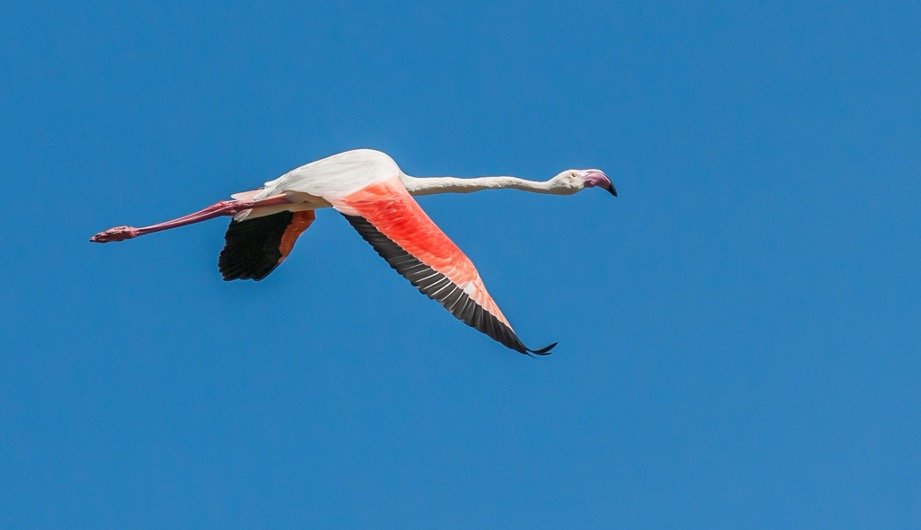 Although all species have the ability to fly, not all species fly very often. In terms of flamingos, the Greater Flamingo is one of the most frequent flyers among all species.

This is because, in comparison to other species, a higher proportion of their population migrates; nevertheless, not all of them, even from the same flock, migrate.

Continue reading to learn more about when flamingos fly, how high they soar, and other facts about flamingos and their flight!

How Far Can Flamingos Fly?

Despite their size, flamingos are capable of flying over 600 kilometres (373 miles) in a single night. Predation is one of the reasons why long-distance flights are conducted at night.

However, not all flamingos can fly great distances, and the Greater Flamingo is usually the one who conducts the most of the long-distance flying. 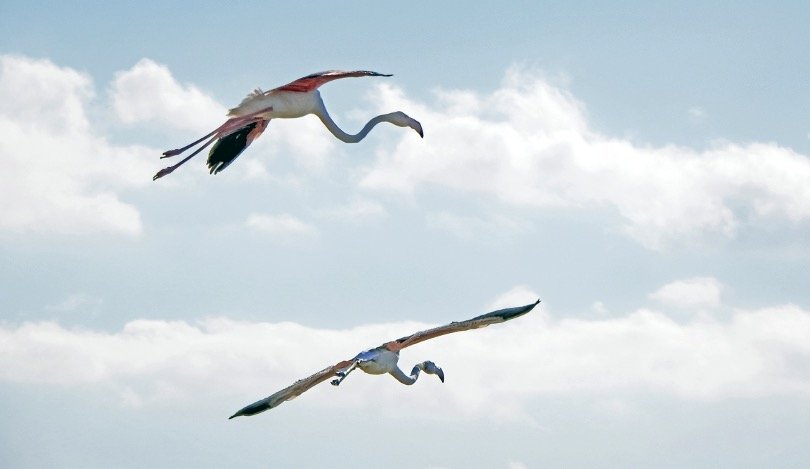 Flamingos like to fly at night, when the skies are clear and the tailwinds are favourable. With the extra tailwind, this avoids predators such as eagles and makes the fly faster and easier.

Although Greater Flamingos are somewhat migratory, they are widely dispersed and, in general, not the whole population in the habitat migrates. Northern populations are more likely to migrate on a regular basis.

How Fast Can Flamingos Fly? 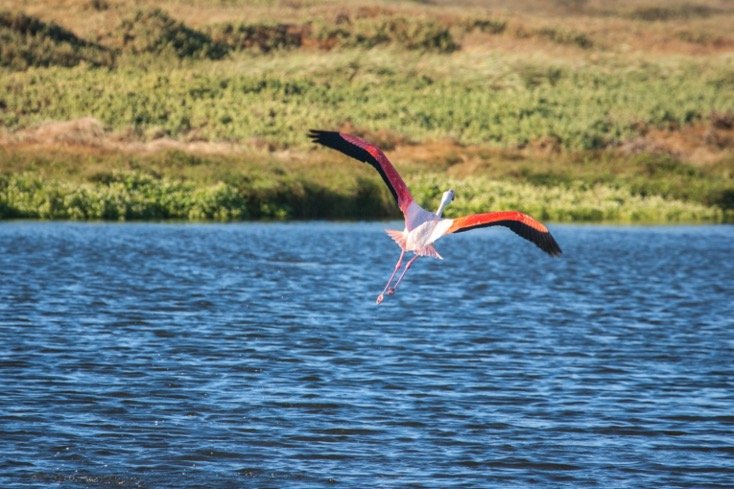 How High Can Flamingos Fly?

Large flocks of birds appear on radars, and the flock of birds flying high has been identified as flamingos. The flock was spotted flying high above Bolivia on this occasion.

Flamingos are supposed to fly at such high altitudes to escape being eaten by other birds like eagles. For this reason, the larger range of flight is typically achieved when flying during the day.

Do Flamingos Fly In Formation?

When migrating, flamingos create formations, which are usually in the shape of a “V.” This is one of the reasons why some flamingo species are able to fly vast distances.

Because each flamingo will fly slightly above the bird in front of them, flying in formations like this needs less energy. As a result, the wind resistance is reduced, and the flight becomes considerably more efficient. 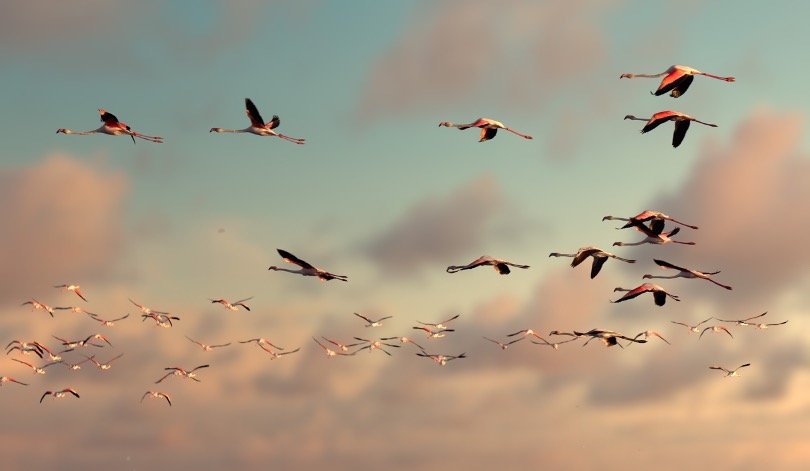 Each flamingo will take a turn leading the flock and absorbing the majority of the wind resistance. When the leading bird becomes exhausted, another will take its place in front of it, and so on.

Flamingos can be fairly noisy and produce comparable honking noises to geese while flying in formation.

This noise has a function, as it is used by the birds to help organise and maintain the tight formation that is required for migration.

How Do Flamingos Take Off?

Flamingos take to the air by sprinting and stretching their necks out. Soon after, they start flapping their wings furiously, eventually lifting into the air. 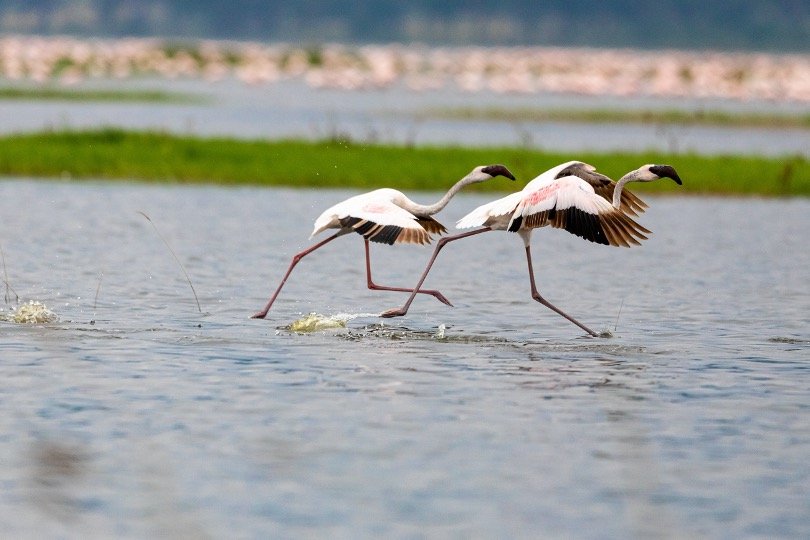 This take-off technique is similar to that of a plane, in which enough momentum is built up to allow the plane to lift off. Flamingos can fly and land on both land and water.

What Is The Flying Position Of A Flamingo?

How Do Flamingos Land?

When the flight comes to an end, the flock’s well-organized formation is thrown out the window, and the flamingos scatter to locate the ideal landing site. 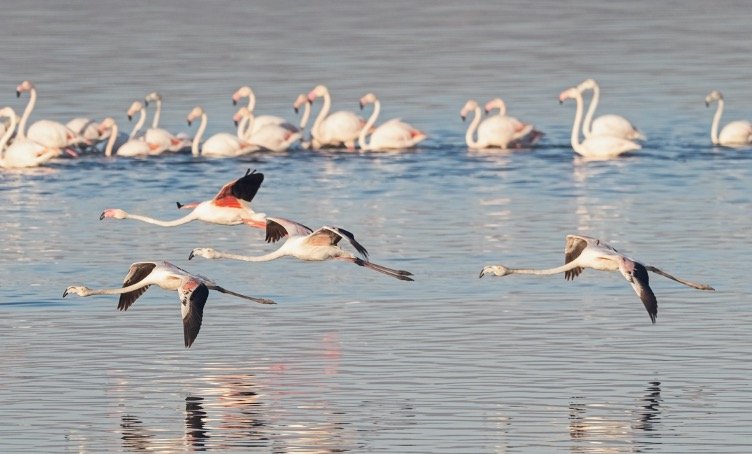 The landing is nearly identical to the take-off. This entails slowing down while standing erect and lowering the feet. The bird will touch down and sprint many paces before coming to a stop when it slows down to a low enough speed.

Although the actual landing procedure can be fairly elegant, it can often be an amusing sight since there can be pandemonium with a lot of noise.

What Age Can Flamingos Fly At?

At about 11 weeks of age, most flamingo species’ young birds will have completely developed flight feathers. These young birds will not be able to fly for a few weeks, and on average, they are between two and three months old before they can fly correctly.

Do Flamingos Fly With Their Young?

Flamingos and their offspring do not usually fly together. When they reach the age of two or three months, young birds will still have their grey plumage on them.

If they do fly, it will almost always be for small distances since they need to grow to their maximum size before flying large distances. 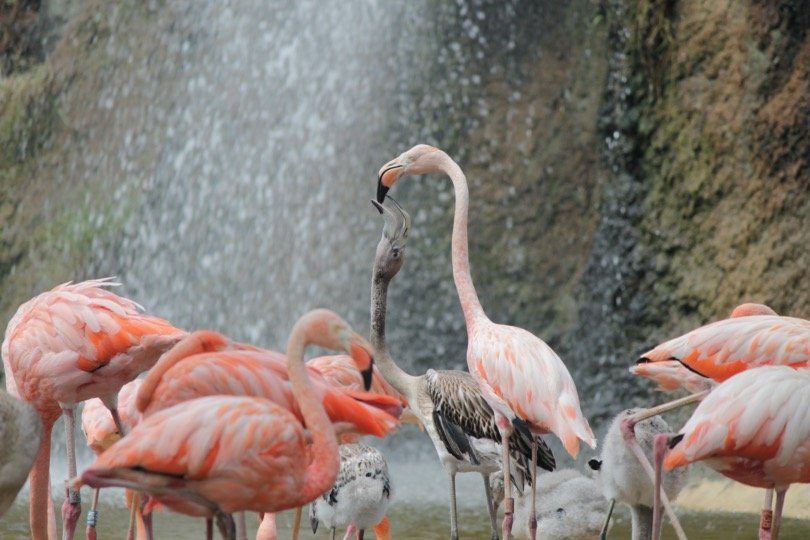 Why Do Flamingos Fly?

Flamingos aren’t seen flying often, so why do they do so?

Flamingos fly primarily for migration and food, but only when food supplies in their natural area become low. The majority of flamingos are year-round inhabitants that stay in their range and habitat.

Migration is most prevalent among northern flamingo species, and it is much more common among populations that nest at higher elevations. Because lakes may freeze over in the winter, they must migrate to a warmer location.

Warmer locations may also be a concern and a reason for flamingo migration, as birds can shift to a more advantageous spot if there is a drought in these warmer areas. Flamingos spend the most of their time on the ground since this is where they get their food.

Why Do Flamingos Not Fly In Zoos?

The majority of zoo flamingos have their wings cut, making them unable to fly. Clipping entails the removal of the main flying feathers, resulting in the bird being temporarily grounded.

It causes little injury or discomfort to the bird, and the flying feathers will regrow during the next moult. In other outdoor situations, netting over the top of the enclosure can be used to allow animals to fly freely around their zoo area without escaping.

Another approach is pinioning, which happens sometimes but is becoming less prevalent. Because the second phalange on the wing is entirely removed, this procedure is harsh and can cause severe discomfort to birds. Clipping, on the other hand, is considerably more prevalent.

Why Don’t We See Flamingos Flying In The Sky?

Flamingos prefer to fly at night and soar high in the sky at heights of 10,000 to 13,000 feet. These two factors make them exceedingly difficult to see, and they frequently fly at 15,000 feet throughout the day.

Depending on where you live, you may have seen a flock of flamingos floating high in the sky but been unable to identify them due to the difficulty of doing so without special equipment.

When you watch flamingos flying, you’ll see black patterns under their wings. Another cause of their misidentification in the skies is that most people assume flamingos are pink all around them!