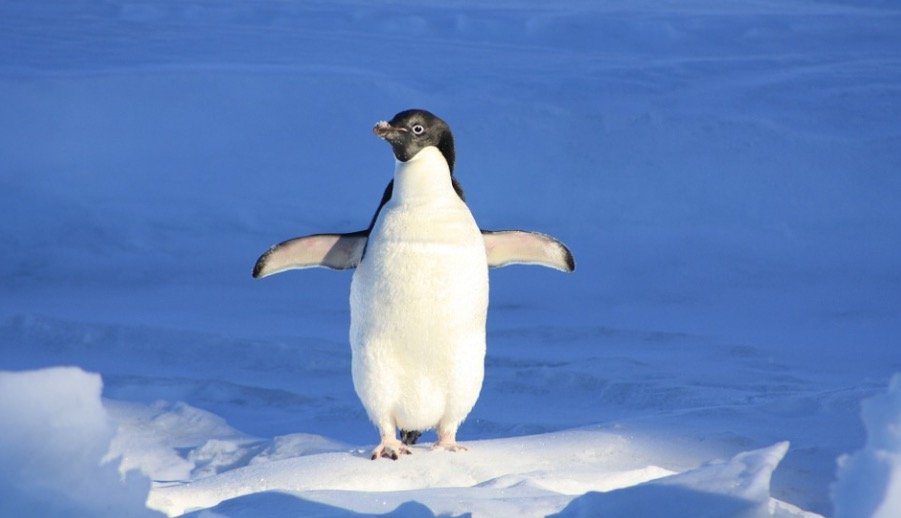 In 1840, a French explorer, Jules Dumont d’Urville was named the penguin for his wife Adelie. Adelie Penguins are migratory birds that spend winters in the northern region and migrate towards the South for the summer months.

The body of Adelie Penguin consists blue-black dorsal side and a completely white stomach and chest. The species can be easily identified due to their color.

A white ring surrounding their eye is the characteristic feature of these birds with their black head and beak. The Adelie Penguin has strong, pink feet that are usually tough and uneven.

The Penguins use their nails for reaching their nesting sites from rocky cliffs and it also assists them in pushing or sliding along the ice. Adelie Penguins can easily swim in the cold waters with the help of their webbed feet and cramped flippers. 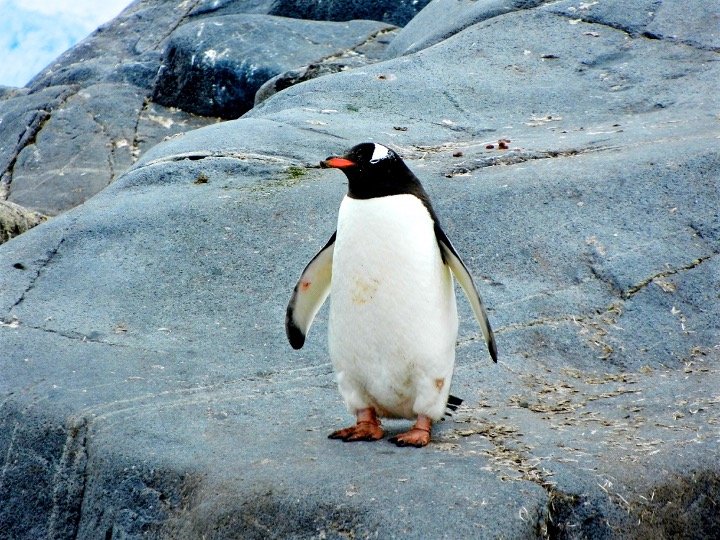 As the Antarctic coastline is the habitat of Adelie Penguins, they are considered as one of the birds that are found in the southernmost area of the world. They prefer migration and migrate towards the north during the winter months because the food availability is much better here and live in large ice platforms.

The Adelie Penguins move towards the south when the climate becomes warmer and head towards the coastal beaches to build nests on the rocky slopes of ice-free ground.

Their colonies may include more than half a million Penguins, which is one of the largest animal colonies in the world on Ross Island.

In the Ross sea, due to the activities of four frightening volcanoes, an Island is formed, which is called the Ross Island.

The Adelie Penguins are also very social as the other penguin species. They form huge colonies that may contain thousands of penguin individuals. The colonies are large groups of individuals when they gather together.

However, these Penguins are not dreadfully terrible but in some cases, they have been recorded to become aggressive over their nesting sites. Sometimes, the penguins are also used to steal rocks from the nests of other penguins.

They also prefer to hunt in groups and it is maybe to avoid predation from various marine animals. They have an interesting ability to communicate via their specific eye movements and their body language, which they use to interact with each other constantly.

Their eye movement is considered the most common form of communication in these organisms. 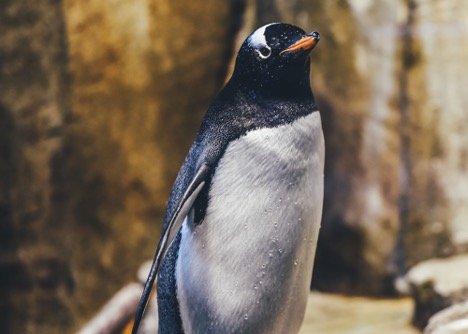 The Antarctic summer months occur during November and December, which is also the breeding season of the Adelie Penguins and they return to their breeding grounds at that time.

During this time, the Penguins abstain from food that helps them to make the trek to their nesting ground easily while using their soft feet. Their feet are well designed for this purpose.

The mating occurs for life in large colonies. Around two eggs are laid by the females within a couple of days. The incubation of the eggs is done by both the parents. During the incubation period, other members of the colony go off the feed, for up to 10 days.

The Adelie Penguin breaks out of the egg with the help of their egg tooth. The egg tooth is a hump on their beaks. Both the parents are involved in the parental care of their offspring after the eggs hatch.

They do this in turn when a parent takes care of a young other went to gather food. The chicks can look after themselves at the age of 2 to 3 months. They form Creches, which are a group of new individuals.

Seas and oceans are the major food sources for Adelie Penguins. They are excellent swimmers and capable to find their prey from the sea. They primarily prey upon krill, which is widely distributed throughout the Antarctic Ocean.

The mollusks, squid, and small fish species are also predated by the Adelie Penguin. It is revealed by the evidence of fossilized eggshells assembled in the colonies of Adelie Penguin over the last 38,000 years that the penguins suddenly changed their diet from fish species to Krill.

This may happen around two hundred years ago. It is also suggested that the decline of Antarctic Fur Seal in the late 1700s and Baleen Whales in the twentieth century were the major reasons behind this sudden change.

The abundance of Krills in Antarctica reduce the competition between these predators and they also get food source easily by exploiting Krills.

Adelie penguins inhabit uncompromising conditions thus they do not have any land-based predators. However, they can be predated by various water-based organisms such as Leopard Seal.

The Leopard Seal is also one of the southern-most species and generally, they get food from Adelie Penguins in the Southern ocean. To avoid predation, the penguins do not walk on thin ice and always swim in groups.

Another large predator of the Adelie Penguin is the Killer Whale but usually, it prefers larger species of Penguin. The eggs of Adelie Penguins are also a subject to threat, it can be preyed on by South Polar Skuas if the eggs are unprotected.

The habitats of Adelie penguins include one of the coldest environments on earth. They have made some adaptations to survive in extreme and harsh environmental conditions. For example, they have a thick layer of fat under their skin that keeps them warm.

They also get insulation by their feathers and get also protection by a waterproof layer of feathers. The Adelie Penguins have developed efficient hunting strategies thus they usually consume up to 2 kg of food per day.

According to the data, around 9,000 tonnes of food is consumed by a breeding colony in 24 hours. They are a good diver and can dive up to 175 meters in search of food and also swim fantastically by using their flippers.

However, they lack teeth but contain tooth-like barbs, which are located on their tongue and the roof of their mouth. However, penguins use these barbs to consume slithery prey.

Humans are visiting the colonies of Adelie Penguin since they started tourists programs to Antarctica. These can be easily observed there while nesting on the beaches or hunting in the ocean waters.

Thus it is considered that the species are one of the well-known species of Penguins today. Earlier, the Penguins are also hunted by the explorers to consume their meat and eggs that helps them to survive in the relentless conditions.

However, the species have been constricted to living on coastal Antarctica, but in the southern hemisphere, they are known as one of the most widespread Penguins.

The species are well adapted to the harsh conditions of Antarctica and throughout Southern Antarctica, more than 2.5 million breeding pairs are recorded. The nesting patterns of Adelie Penguin are used as indicators of climate change by scientists.

It is noticed that they only make their nests on beaches that were previously covered by ice. The species is listed as “least concern” species by the IUCN red list of threatened species.