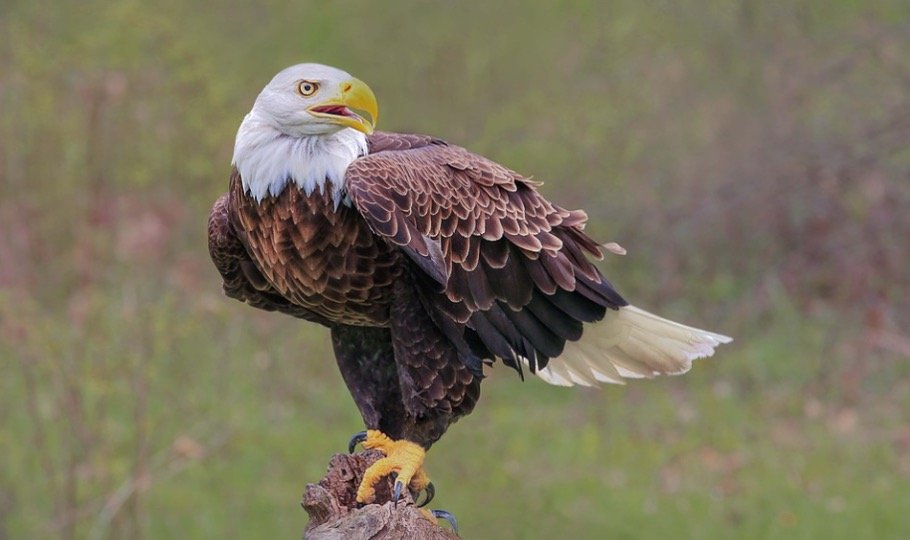 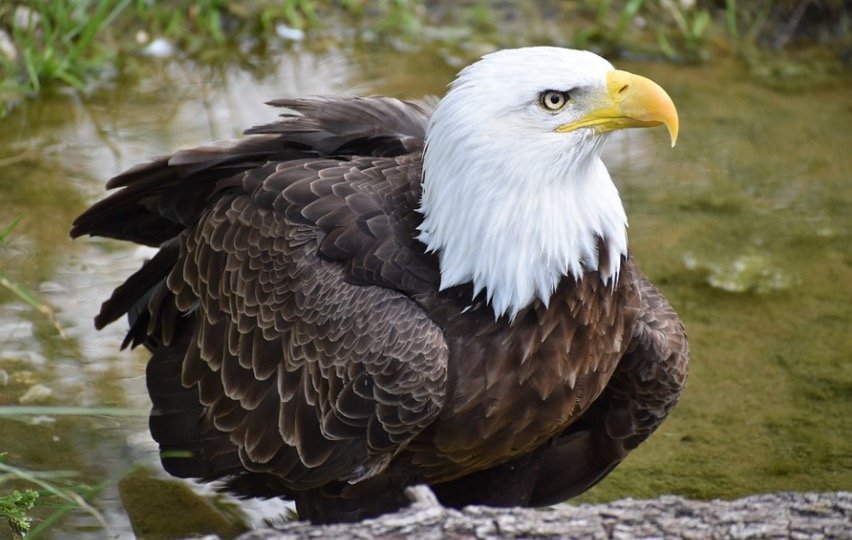 Eagle belongs to the family Accipitridae. The bird is also known as “king of all birds”. It gets is his nickname due to its large size and power that can be seen soaring in the air in search of any prey of food.

Although the eagles cannot fly with remarkable speed, as compared to other birds of enormous size, the speed of the bird in the air is remarkable. Many governments, conservation organizations, and international acts are trying to conserve the eagle but a few more obscure species are threatened and in danger of extinction.

o It is believed that the evolution of eagles happened earlier than kites, the bird evolved probably 36 million years ago.

o Several human communities use eagles as a symbol of the power of and strength. Many countries including Rome, Byzantium, Russia, and Germanic countries also adopted the bird as the national emblem. A species having a double-headed unusual look is used as a historical motif from the time of ancient Mesopotamia.

o The Eagles have a very strong grip, which is actually 10 times stronger than the grip of a human. However the size of an eagle is much smaller than a human but despite the fact, they have the same size of eyes as humans.

o Every year, the eagles molt completely and lose their all feathers. After molting, they grow new feathers every year. Some species of eagles maintain proper balance by losing feathers equally on both sides.

o Eagles have a great ability to carry weight up to four times their body weight, thus the birds are considered as one of the strongest birds in the world. 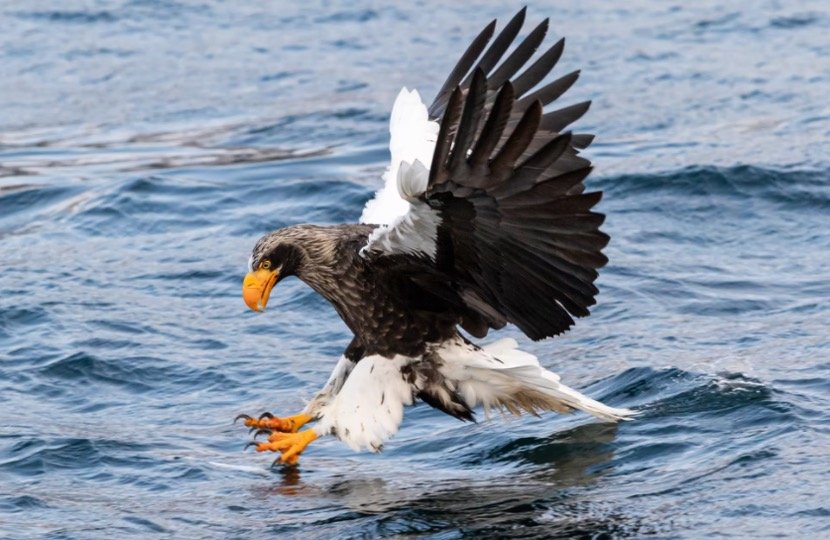 Other Species of Eagle

An eagle belongs to the family Accipitridae and class Aves. The family name of the bird is derived from a Latin word accipiter that means hawk. Besides eagles, many other birds such as vultures, kites, and hawks also belong to the family.

The bird can be easily distinguished due to its large size and large beak. The genus of eagles is classified into 60 species. All the species are still living and can be divided into major groups.

The groups include serpent eagles, fish or sea eagles, forest eagles, and booted eagles. However, the groups are not taxonomical and are only divided as informal groups. The interesting fact about the birds is the bald eagle is a type of sea eagle, which is not known by many Americans.

Bald Eagle: The United States declared the bald eagle as the national bird. Bald eagles consist of heads of white color and the tail of the bird is of brown color. The bird usually lives near water bodies and uses old-growth trees for nesting.

Harpy Eagles: The habitat of harpy eagles are located in the tropical rainforests. The bird is distributed in the forests of Mexico, Central America, and South America. The feathers of the harpy eagle are dark grey and the undersides are white. Their neck is surrounded by a black band and grey feathers are present in their heads.

Golden Eagles: The birds are distributed in the regions of Europe, North America, Asia, and parts of Northern Africa. The golden eagles become dark brown in adult age and their wings turn slightly paler with golden napes.

Stellar’s Sea Eagles: The habitats of stellar sea eagles are the coastal regions of northeastern Asia. The characteristic features of the bird are the dark-colored bodies and bright yellow bills with tails, and thighs of bright yellow color.

White-Tailed Eagle: Generally the species prefer to live near open water bodies. The breeding grounds of eagles are in Northern Europe and northern Asia. The bird has feathers of brown color and pale heads with tail feathers of white color. 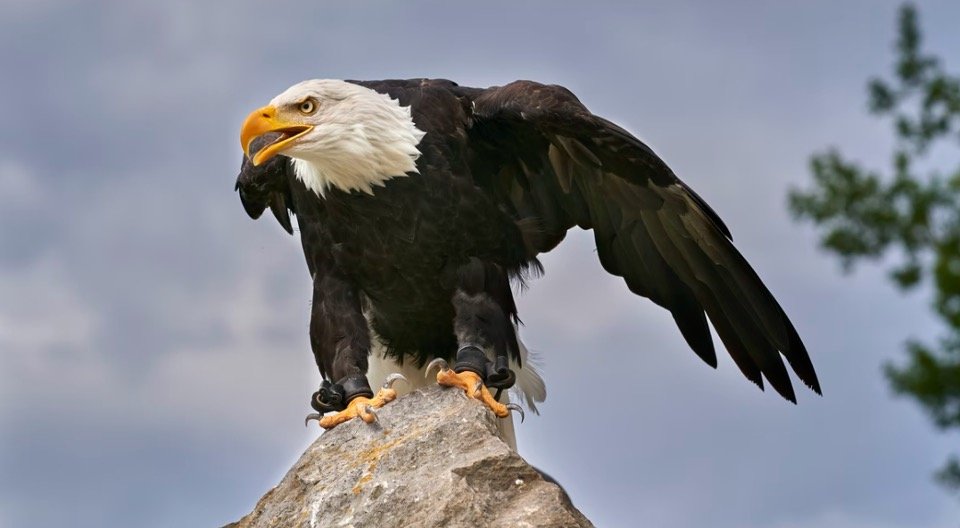 Eagle is considered one of the largest birds in the world. The bird is smaller than only some vultures and condors in size. The harpy eagle is known as the largest species of eagle, which is followed by the Steller’s sea eagle.

The weight of the bird is around 20 pounds and the length of their wingspan is about 7 to 8 feet. The male eagles are relatively smaller than females. However, the reason behind the larger size of females is unknown but it is believed that they protect their chicks while males stay away from this, thus they have a larger size.

The sharp and heavy beaks of the eagles are their distinguishing features. The beaks are pointed downward at the end and each foot of the bird consist of four big talons.

The small projection or “spicules” are found on the bottom of their feet that helps the birds in grasping their prey. The head of an eagle is fully-feathered unlike the scavenging vulture and sometimes a beautiful crest is also present on their head. 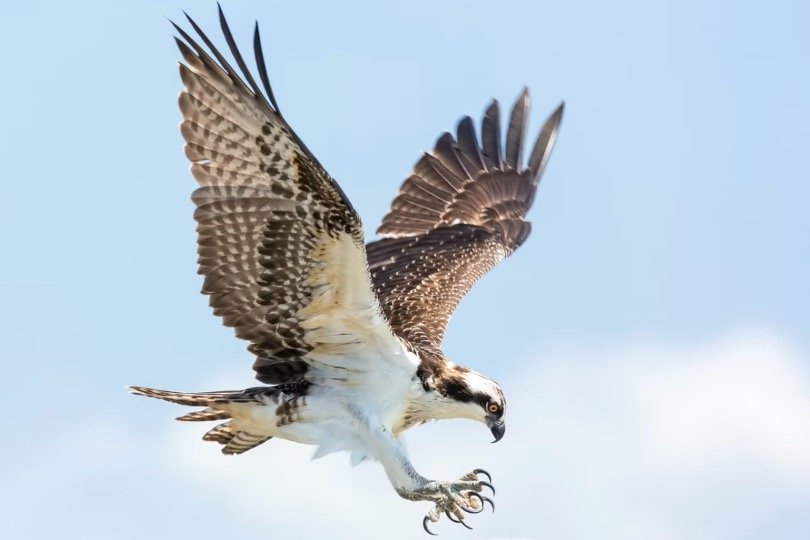 The behavior of an eagle is very similar to that of a Hawk. The birds also show some similarities in their physical and behavioral characters. Around 15 species of the eagles are commonly named hawk-eagles because the species show mixed intermediary features. However, the size of an eagle is much smaller than a hawk, and the length of its wingspan is only 5 feet.

The vision of an eagle is extraordinary, which is considered best among the animal kingdom. If the eyesight of an eagle is translated into human terms, it may have 20/5 or 20/4 eyesight.

The eagle gets several advantages of its vision, such as the bird can see objects farther than many other animals and four to eight times farther than the human. Thus eagles can spot their prey from a large distance and even in flight, they can see their prey.

The vision of the bird also allows it to see ultraviolet rays and a range of colors and also zoom in on the prey by focusing on it. However, the eagle needs to turn its entire head to focus on a specific spot. Despite humans, who only contain seven vertebrae, the eagles have 14 vertebrae in their neck. Thus it becomes able to rotate to a greater degree.

The eagle uses its feet and talons to snatch up the prey after spotting it. They complete the whole process with great speed. The bird is also a good diver and can dive down at the speed of 150 to 200 miles per hour.

The speed is equal to the speed of the peregrine falcon, which is the fastest organism in the world. However, they cannot fly with remarkable speed and can travel around 28 to 32 miles per hour.

Most of the species of eagle are sedentary and several species are migratory birds that migrate during winters. The birds form convocations or groups, which is also known as aerie or congregation. However, they do not gather in large social groups and prefer narrow families.

The birds usually do not make social contacts besides their chicks and mate. Besides the bald eagle, other species generally do not use any vocalization except breeding season. On the other hand, the bald eagle makes harsh sounds to communicate with others and also to warn away predators. 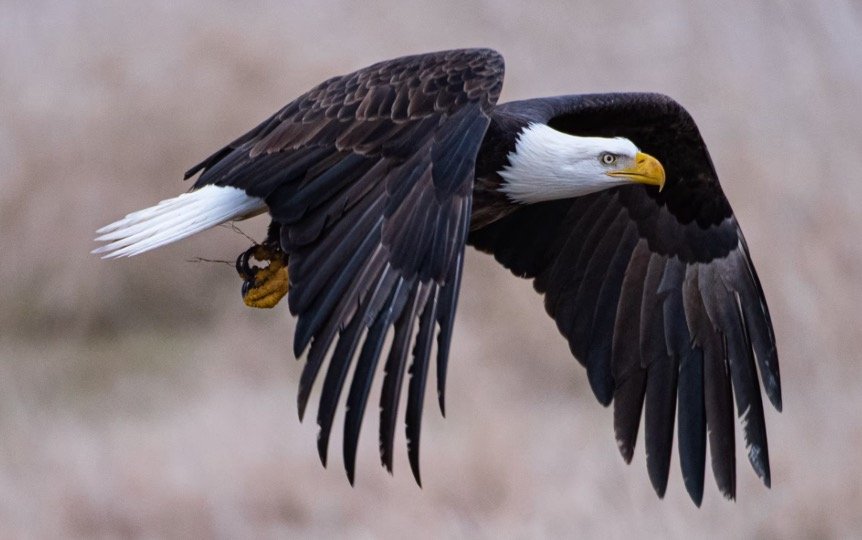 The eagles are generally distributed in all types of habitats and nearly all parts of the world. The birds can be found in northern tundra to tropical rainforests and deserts. In North America, bald eagles and golden eagles are very common.

The other nine species are endemic to Central and South America. The birds have a highly concentrated population in the Africa and eastern hemisphere. Several islands in the Indian and Pacific Oceans are also rich and have distinct species of eagles.

In all terrestrial ecosystems, the eagle is found as an apex predator. The sharp beak and talons of the bird make it highly adaptable to tear flesh and ripping. The birds are also scavengers and feed on killed animals by other animals.

Even the bald eagle is famous for its stealing habit, due to which Benjamin Franklin commented that the bird has bad moral character. The birds can skip meals for several weeks thus they are considered as feast or famine type of birds. 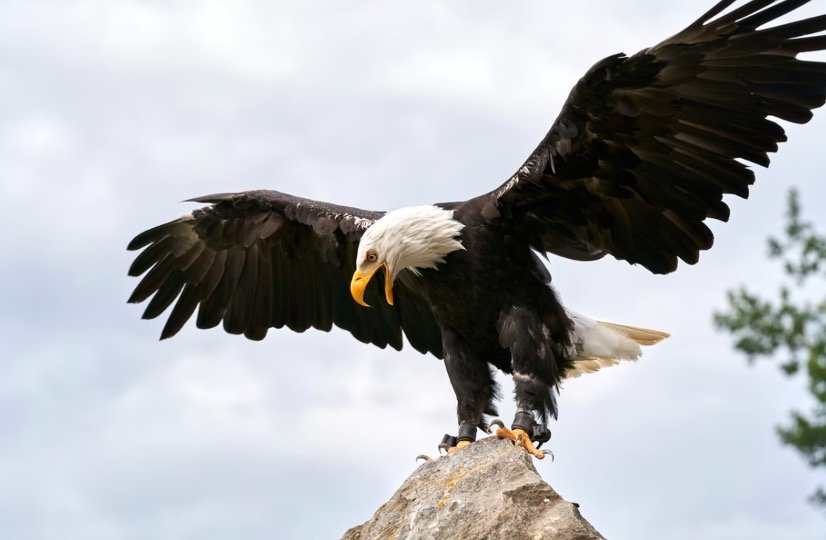 What does Eagle Eat?

The eagle feeds upon the prey species such as fish, crabs, snakes, amphibians, small birds, rodents, and other mammals. Sometimes the bird also feeds on deer or pigs. Although the meals of the bird depend upon their habitat they do not prefer a single type of food.

However, sometimes they prefer single species, but their food may include a wide variety of animals. The eagle prefers to eat the animal on the spot, where it was killed when the size of the prey is large enough to carry on its talons.

However, an adult eagle is not threatened by any natural predator, but the chicks and eggs of the birds are threatened by predation. The hawks, owls, raccoons, bobcats, and other carnivores can eat the eggs or chicks, or eagles. 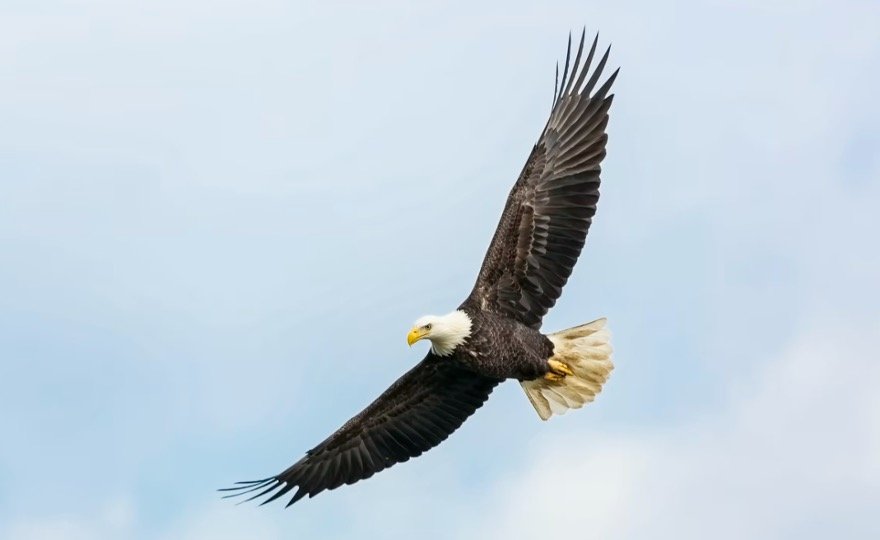 Predators and Threats of Eagle

Eagles do not have any natural predators but a few threats emerged during the 19th and 20th centuries that affected the birds in the wild. Habitat loss, overhunting, use of chemical pesticides are some major threats that threatened the species for extinction. The population of eagles is increasing and recovering quickly in such places where the use of pesticides and hunting is regulated.

Reproduction, Babies, and Lifespan of Eagle

The eagles show courtship rituals, which are very impressive and include synchronized behavior. Usually, the birds form monogamous pairs with their mates. Thus they sometimes use and create the same nest in the high cliff or tree.

The birds use sticks, moss, lichens, and other plant materials to build their nests. Most of the time, the nests were used only when they raise their young and then abandon them for the rest of the year.

The incubation period is of one or two months, during this time, the female incubates the eggs, and food is gathered by a male eagle. The female lays one to four eggs at a time but the dominant chick kills other chicks due to competition.

Thus due to this behavior, the mortality rate is quite high in these species but it also ensures the survival of one chick. The chick develops flight feathers within a few months and reaches sexual maturity at the age of three or four years.

The average life span of an eagle is around 20 to 30 years in the wild. The bird will start losing its hunting edge when it became older while in captivity, the eagle can live up to 50 years due to the availability of guaranteed meals.

Most of the species of eagles have a remarkable population in the world, thus the IUCN red list for threatened species listed eagles as ‘least concerned’ species. It is estimated that more than 100,000 individuals are remaining in the world.

The birds have recovered their population very quickly since the 1980s and 1990s when they were listed as endangered species. However, some species of eagle are threatened, such as the harpy eagle is listed as near threatened and the population is in decline.

Although the population of the steppe eagle is around 50,000 to 75,000, it is likewise in decline, and the species is listed as “endangered” species by the IUCN red list.

There are several zoos in the world, where the bald eagle can be commonly seen. The zoos include the San Diego Zoo, Saint Louis Zoo, and Smithsonian’s National Zoo, Lincoln Park Zoo, Detroit Zoo, Oregon Zoo, Louisville Zoo, Minnesota Zoo, Denver Zoo, Tulsa Zoo, Cincinnati Zoo, Houston Zoo, San Francisco Zoo, and many other zoos. The zoos also include many other species of eagles along with the bald eagle.

Eagles in the UK: Types and where to find them

07 Proven Tips On How To Attract Doves To Your Yard

08 Proven Tips On How To Attract Finches To Your Yard

07 Proven Tips On How To Attract Birds To Your Balcony

08 Proven Tips On How To Attract Robins To Your Yard?

What Do Chickadees Eat? All You Need To Know