Woodpeckers In Wisconsin: All You Need To Know 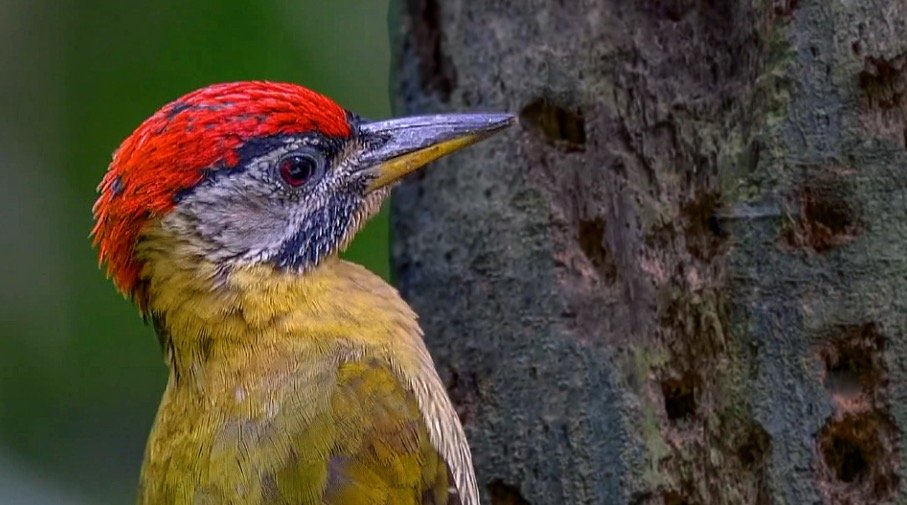 Featuring over 32,900 miles of rivers and streams, 15,000 inland lakes, and thousands of small ponds, Wisconsin is heavily aquatic, which draws a diversity of insects to the many shores and surrounding forests, the perfect place for woodpeckers to hunt their prey.

Some of the following woodpeckers are plentiful to observe, while others are difficult and can only be found at certain times. With such a vast number of woodpeckers, you must first understand, what woodpeckers can be found in Wisconsin?

Most of these birds have similar diets and habitats, but some have behavioral differences that you wouldn’t expect from a woodpecker.

Interested in learning more about woodpeckers in Wisconsin? Keep reading to find out!

The list of woodpeckers below has been compiled from historical sighting reports from various sources. Whilst some birds listed are uncommon and hard to spot, we’ve still included them as they are sometimes seen still in Wisconsin. 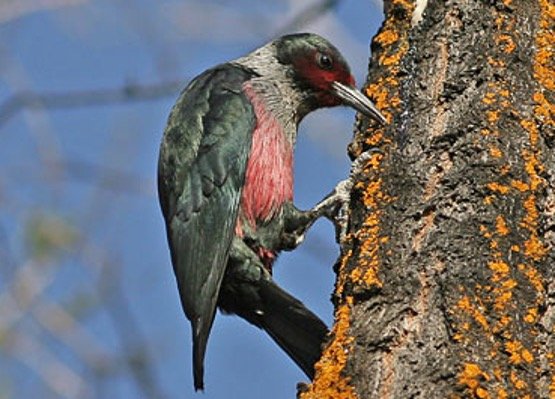 The Lewis’s Woodpecker is a green species with a red face that looks dark depending on the lighting and is a bulky pink colour. While it has the appearance of a woodpecker, this bird forages like a flycatcher and flies like a crow.

Lewis’s Woodpeckers boast an elongated body, long tail, and long wings with a woodpecker-like bill. They perch on posts, wires, and bare branches to snatch flying insects in midair.

You can typically find them in open ponderosa pine, woodlands, agricultural segments with scattered trees, orchards, and burned forests. While they are uncommon in Wisconsin, the best time to see them is in the winter. 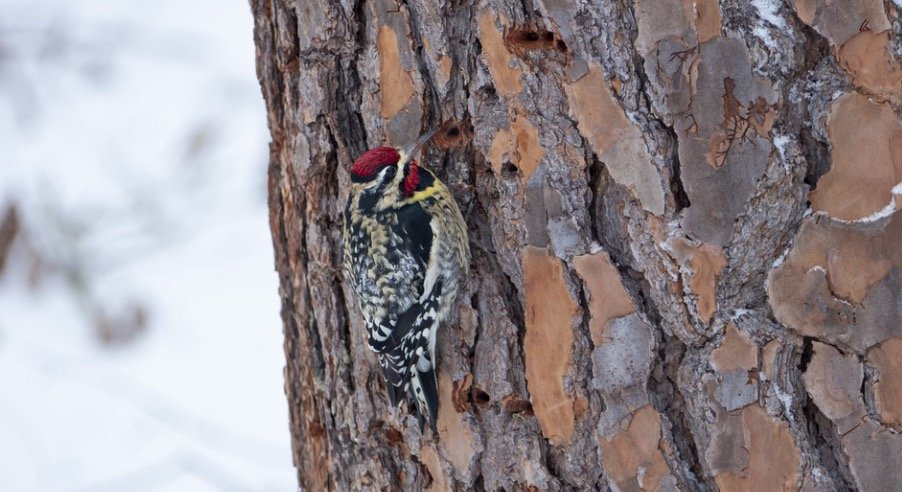 Although it breeds in Canada, the Yellow-Bellied Sapsucker can be seen year-round in Wisconsin but is mostly observed between April and November. These woodpeckers primarily feed on the sap that is acquired by drilling holes in forest trees and open woodlands.

Males can be easily identified by their bright red forehead, which is paler in females. This species was named from its yellow wash of colour across the back, belly, and chest. Males have a distinct red patch on their throat, while females have a white patch. 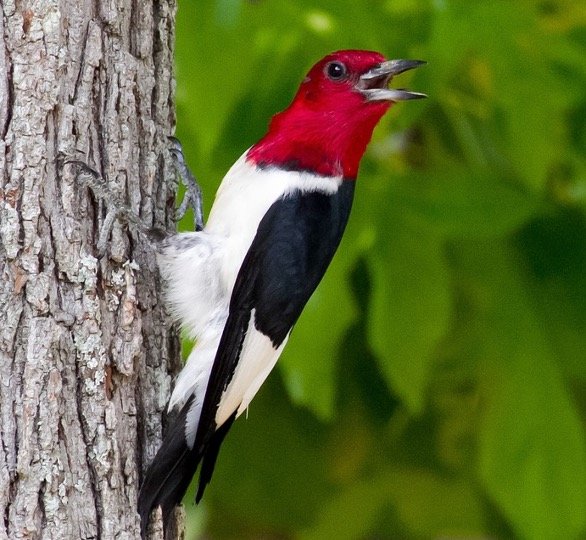 The Red-Headed Woodpecker has one distinct feature, which is also the derivation of its name: a red head. This species is approximately nine inches in length and features a glossy blue-black tail, wings, and back with the upper tail and underparts a white colour.

The entire upper breast, throat, chin, neck, and head are crimson. Outer tail feathers are commonly tipped in white. You can spot the Red-Headed Woodpecker year-round in Wisconsin around large, scattered trees, shade trees in towns, orchards, farms, and groves.

They drill into trees in search of spiders, earthworms, and other insects, but also eat cultivated and wild fruit, berries, seeds, and nuts. If none of these foods are available, they have been known to eat bark. 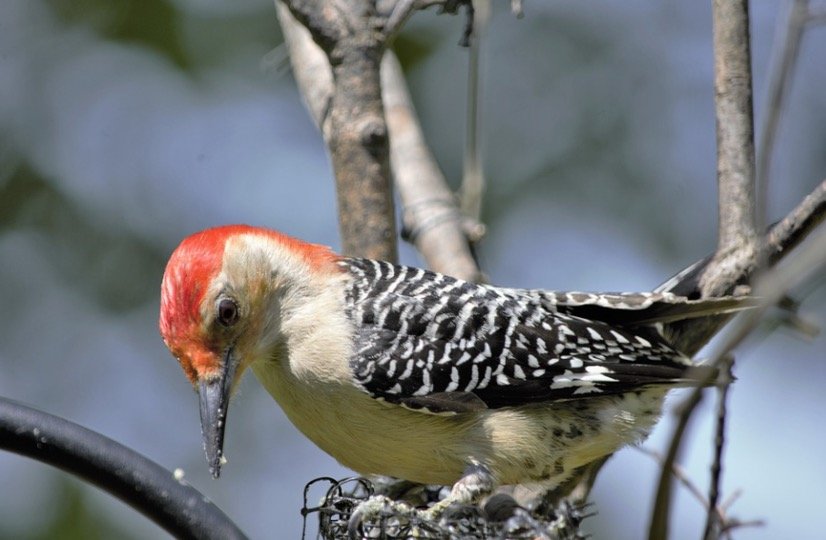 The Red-Bellied Woodpecker is behaviourally unique in that it stores its food in trees for a long Wisconsin winter. Like most woodpeckers, this species eats a variety of insects but can consist of more than 50% plant material depending on the season.

These include wild and cultivated fruits, seeds, acorns, and other nuts. Occasional dining options include small fish, oozing sap, small bird eggs, and tree frogs. You can identify this woodpecker by its red crown and nape (males) and red nape with a grayish-brown crown (females).

Both sexes feature a black barred with white back and tail, white rump, and grayish-white undercarriage. This woodpecker can be observed year-round in wooded areas. 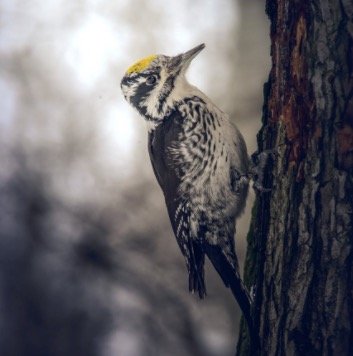 As a native North American woodpecker, the American Three-Toed Woodpecker features black wings and rump, one black stripe by their beak, a blackhead, white throat and belly, black and white flanks, and adult males have a yellow cap.

They are sometimes found around the waters of Lake Superior in upper Wisconsin most of the year but are rare to spot. The American Three-Toed Woodpecker dines on tree sap, fruit, Spruce Beetles, wood-boring beetle larvae, and other insects. 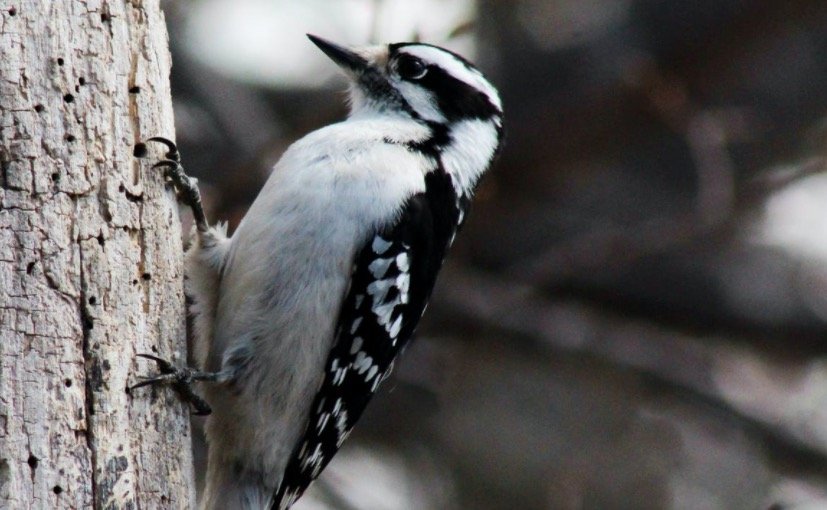 The Black-Backed Woodpecker features three toes on its feet and is considered a medium-sized species. They can be identified as a blackbird with a white stomach and a yellow cap on adult males.

Also called the Arctic three-toed woodpecker, the Black-Backed Woodpecker is regularly confused with the American Three-Toed Woodpecker due to the same features. Their diet consists of spiders, engraver beetles, wood-bring beetles, and the larvae of mountain pine beetles.

You can mainly find them in mature or old-growth forests or burnt forests to forage for dinner. You can spot them within state lines year-round, but they are uncommon. 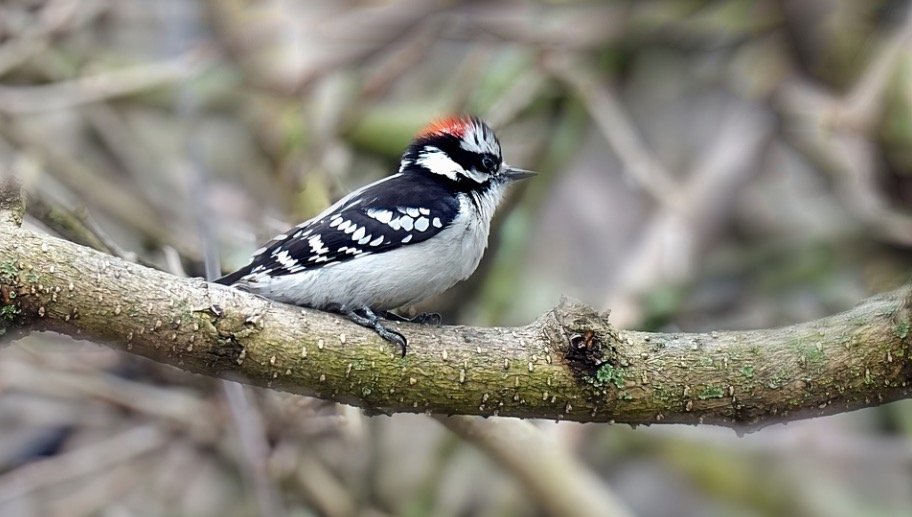 Although this is the smallest woodpecker in North America, there are smaller species elsewhere in the world. You can identify the Downy Woodpecker by its white back, throat, and belly, black upper area and wings, and white bar above and below the eyes.

Downy Woodpeckers have an almost identical plumage pattern as the Hairy Woodpecker but are distinguished by their bill length and the black spots on the white tail feathers.

These tiny birds live in orchards, parks, gardens, and woodland areas year-round where they hunt for caterpillars, gall wasps, ants, beetles, and other insects. 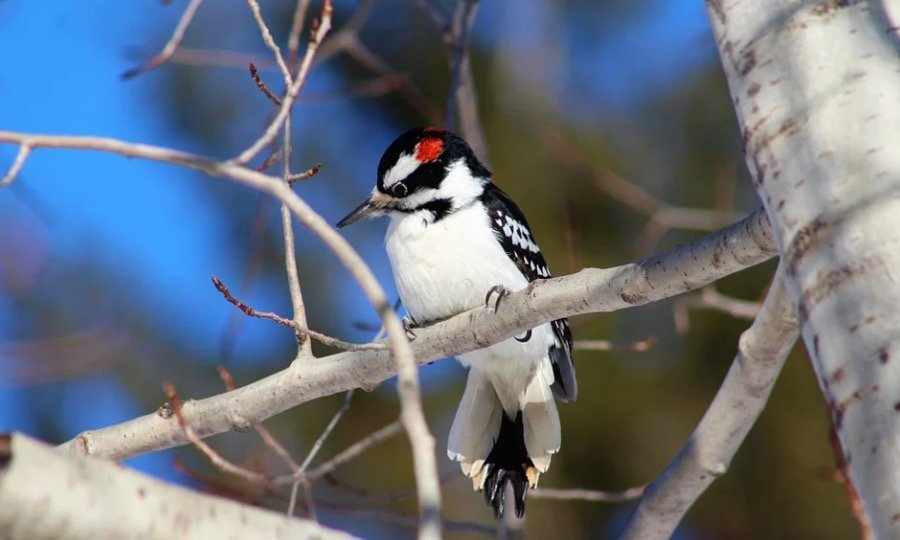 Located in deciduous forests, the Hairy Woodpecker is a medium-sized species identified by the white bar above and below the eyes. Males feature a red patch on the back of their heads. This species is almost identical in appearance to the Downy Woodpecker.

Hummingbirds In Georgia: All You Need To Know

Like many other woodpeckers, these species feed on wood-boring beetle larvae, caterpillars, ants, nuts, seeds, and berries. It almost has been known to feed on sap from damaged trees or after Sapsuckers have retrieved sap. You can spot the Hairy Woodpecker in Wisconsin year-round. 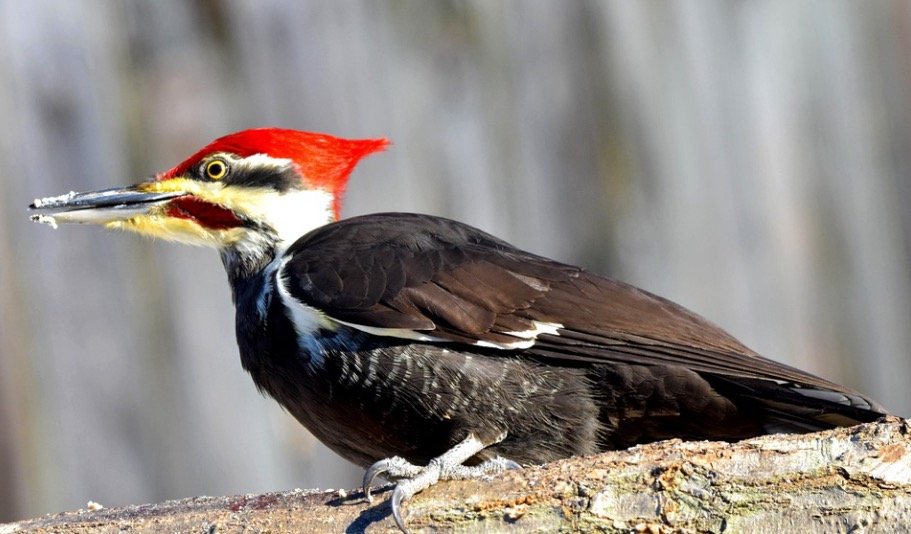 As the largest woodpecker in North America, the name Pileated comes from the Latin word “Pileatus” meaning cap, which is shown by the red crest on their head.

Adult Pileated Woodpeckers can range in size from 16-19-inches long and have a wingspan of 26-30-inches. This species is mainly a blackbird with a wine line down the throat, a red crest, and a large bill. Their call can be identified by a “whack-a-wack-a-wack sound.

This woodpecker species lives in or near forests or heavily wooded areas, where they chip out rectangular holes in trees to find ant colonies. You can observe the Pileated Woodpecker year-round in Wisconsin. 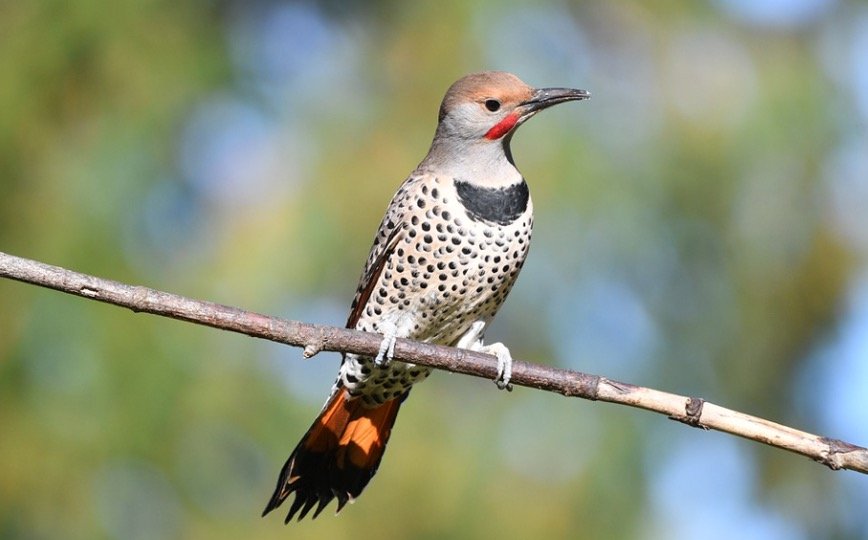 Northern Flickers are fun birds to watch when searching for insects on lawns and in trees. Found mostly in wooded areas, the Northern Flicker appearance differs based on their region.

Most Northern Flickers are about one-foot tall with spotted tan to cream bellies and a brown barred back. His species features red napes and males have a mustache behind their bill.

The curved beaks and long tongues allow them to reach into trees and logs that they are drilling into for insects. The Northern Flicker can be observed hammering away in Wisconsin’s forests year-round.