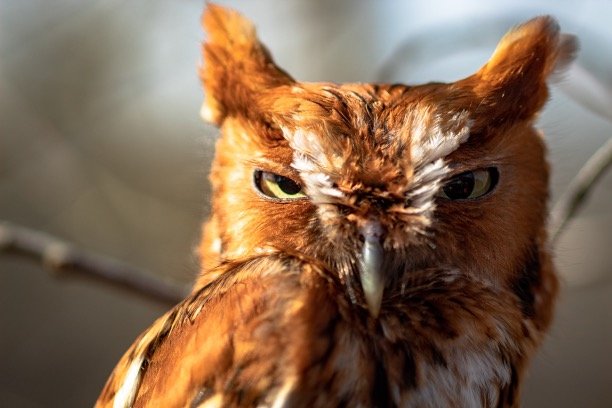 The Eastern screech-owl, also known as Megascops asio, is a member of the Strigidae bird family. This family of birds is comprised of all owl species that are not barn owls and their close cousins. It is one of 24 different species of screech-owls that may be found across the globe.

In 1983, after extensive study and observation of different bird populations, the two types of screech-owls were determined to be distinct species.

Male eastern screech-owls are more nimble fliers and hunters than their female counterparts, despite their smaller size. Additionally, males tend to have voices that are slightly deeper than females.

The prey of eastern screech-owls consists of a diverse array of animals, such as fish, bats, songbirds, crayfish, frogs, lizards, tadpoles, salamanders, spiders, moths, snails, scorpions, fish, and worms, among other things. 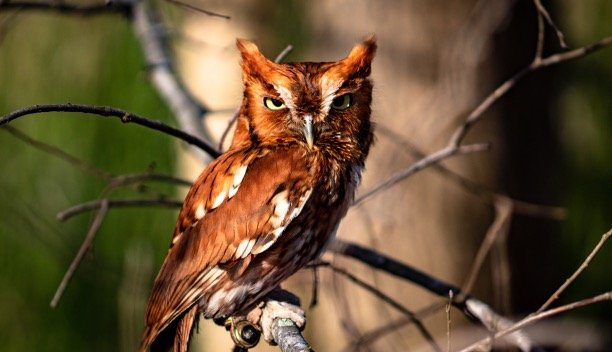 The eastern screech-owl can either be grey or red or rufous in colour, depending on the colour morph. Approximately one-third of these birds have the rufous morph, while the remaining two-thirds have the grey morph. In the eastern and southern regions of the red owl’s range, there are a greater number of red owls.

In spite of the fact that their name suggests otherwise, these owls do not “screech” but rather communicate by a wide range of different sounds, including trills, whinnies, barks, hoots, chuckles, whistles, chatters, and other noises. Males and females both make vocalisations and occasionally engage in duet performances; however, males are typically louder than females.

If a smaller bird such as a chickadee sees them, an alarm will be issued by the larger birds in the area. This can attract a raucous group of birds of many different species, all of which will congregate around the owl in an attempt to scold it while flapping their wings and jumping all around it.

This is due to the fact that screech owls frequently consume birds as their prey. They start their night of hunting around dusk, and they constantly keep an eye out for any birds that are unaware of their presence.

It could be a cardinal that stays at the bird feeder for a little bit longer than it should, or it could be a mourning dove that flies into a pine tree to roost for the night. The owl may sneak its way to the ground undetected in order to get its first food of the night.

You can get an idea of what these birds sound like by listening to the screech owl’s call. The eastern produces a tremulous whinny or a lengthy trill, but the western produces an accelerating sequence of brief whistles or a double trill, similar to the sound of a bouncing ball.

It is true that screech owls have a more piercing and louder call, and they employ it most frequently during territorial disputes with other screech owls. However, in contrast to other types of owls, the screech owl does not make a hooting sound as part of its vocal repertoire.

The eastern screech owl is capable of producing a wide variety of vocalisations. Their “whinny” call has a lowering pitch and is typically used in situations where they are defending their territory. Henry David Thoreau described this call as “a most melancholy graveyard ditty, the reciprocal consolations of suicide lovers.” Henry David Thoreau was a writer and environmentalist.

Their monotonous trill is used to communicate with one another within the family, and mated pairs will occasionally trill in unison. Barking, hooting, squeaking, and screeching are some of the other sounds that screech owls make.

Vocalizations usually take place all the way through the breeding season, beginning with courtship and continuing through the creation of territories and the time when the young are fledging. The pitch of a male’s voice is lower than that of a female’s. 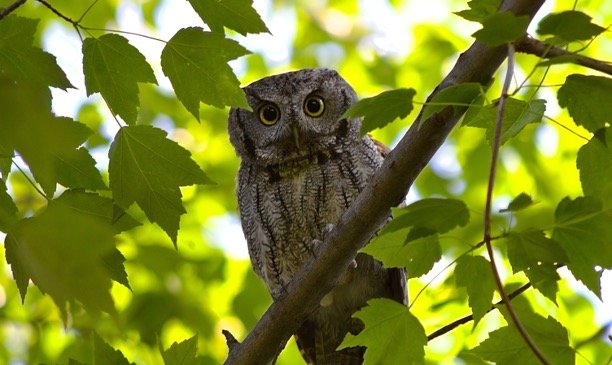 How would you describe their tone?

Imagine a horse flying through the air on helium when you think of an Eastern Screech-Owl. The young raptor makes a whinny that gets progressively lower before finishing with a trill. (The calls of males are typically lower in pitch than those of females.)

The bird is a master of vibrato in general, and while speaking with its own kind, it employs a monotonous trill that is both calming and relaxing. The screech-owls that live in the western part of the country have a call that is more reminiscent of an errant bouncy ball.

They make more of a shrieking noise than anything else. The time of day when screeches are most likely to be heard is between the hours of twilight and dawn. Great-horned owls are the only animals that are known to make this particular sound, which is characterised by a high-pitched noise, while they are either attacking another animal or attempting to frighten off a threat.

Then there are other types of owls that are known as barking owls, and at the period of the year when they are reproducing, they produce this shrieking sound. The sound that these owls make has been given the name “screaming owl” because it is quite close to the sound of a woman screaming. 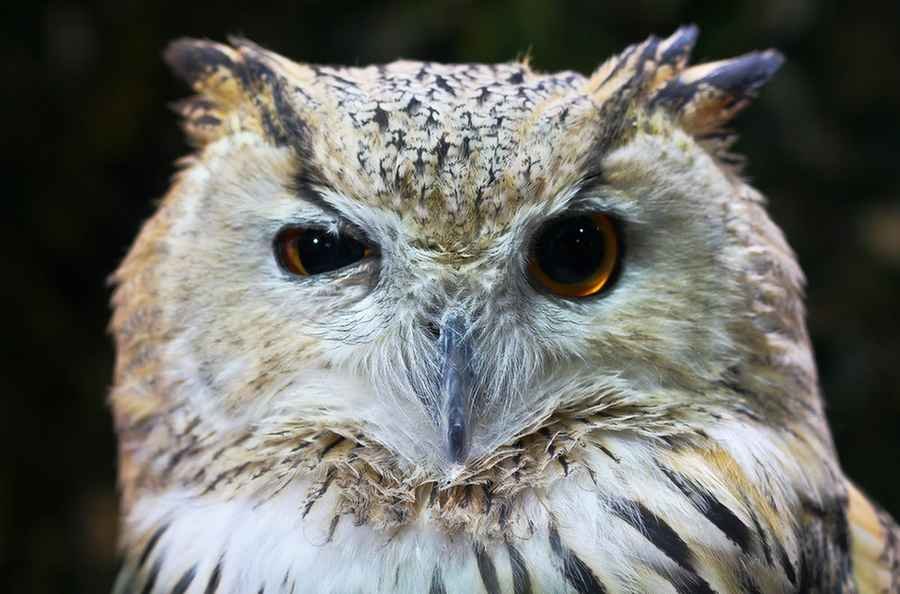 Singing is done by both males and females. Their most common calls include a trill with an even pitch that is sometimes referred to as a “bounce song” or tremolo, and a whinny that is harsh and descends in pitch. Tremolos typically last between three and six seconds and are used by couples or families to stay in touch with one another.

The whinny can last anywhere from 0.5 to 2 seconds and is utilised for territorial defence. It is possible to perform these two songs one right after the other. During both the day and the night, it is possible for mated pairs to sing antiphonally to one another.

The Eastern Screech-Owl has a wide variety of noises, including gentle, low hoots; harsh, piercing barking barks that indicate anxiety or agitation; and screeches, which are often made by adults who are protecting their nests or fledglings. When a bird is being harassed by a large group of other birds, it will make a sound that is either a three- or four-note chuckle or a rattle.

When screech-owls get agitated, they emit a clacking sound by snapping the mandibles of their bills together. Hissing is often used as a threat display by birds that have been captured.

You may also like to read What Eats Owls?