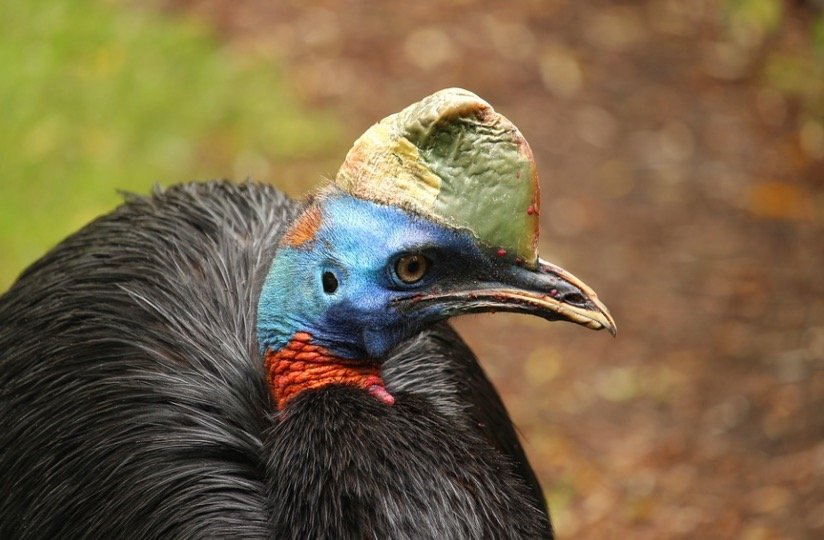 There are a few quills are present in cassowary and their wings are almost vestigial. Cassowary contain coarse and thick feathers and contain filaments in some feathers that appears like hairs.

Thus the feathers are on demand and the bird is also hunted for its feathers and also domesticated. The female birds are relatively larger than males and are also brighter with more bright colors in their head and neck.

The inner toe of each foot contain a kuife- like claw which is quite striking. The organisms are mostly fruit eating and their claws are only forbiddable as the claws of most powerful hunting birds. 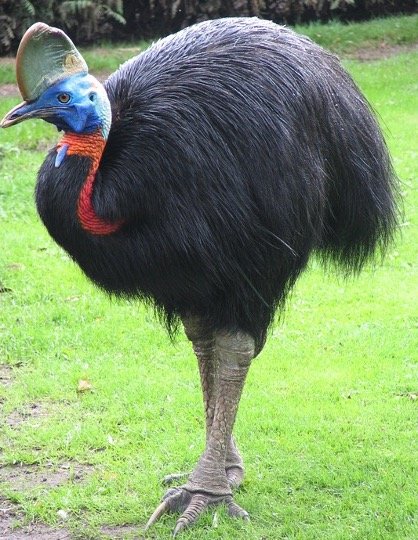 1. The chicks were raised by the male bird and as a parent the male is also in very dangerous mode. While they saw any predator they may attack on their prey with his claws.

2. In a mating season, the female mates with more than one male. After mating the female lay eggs in their nest and then move on to mate again.

3. It is believed by biologists that the cassowaries has a hard casques on top of their head, which is used by cassowaries to push through the undergrowth in the rain forest. However the exact function of casque is not yet known.

4. Cassowaries can produce a lot of vocalization, such as booming, hissing, rumbling and roaring.

5. Recently a dinosaur was discovered, which is resembled closely to a cassowary. However there is not any close relation between these two species. The cassowary was first evolved 60 million years ago.

Cassowary can be spotted in the regions of guinea, the northeastern part of Australia and the Ane Island, which is located between Australia and New Guinea. However, they have large bodies but they cannot be seen easily in tropical rainforest. 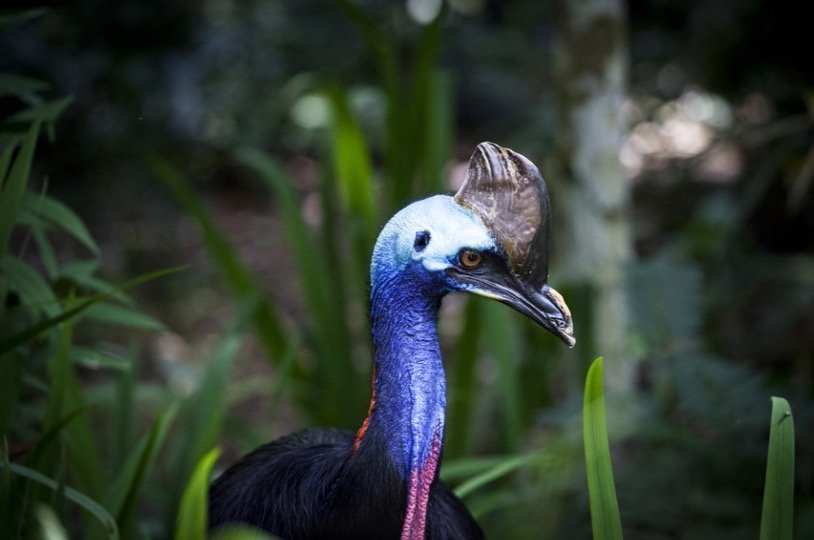 The nets usually built by male bird. It uses fallen leaves for construction of their nest. Sometimes the birds use grass and leaves to line up their nests. The male chases the female after laying eggs and do not let her to enter in the nest.

Cassowary is further classified into thee species that are as follows-

The southern or double wattled cassowary [casvarius casuaries casuarius]- The name of the bird is derived from a Malay word which means the bird. The species is also used to compare with other species of cassowary.

Casuarius unappendiculatus (the northern or single-wattled cassowary) – When we observe the scientific name of the species, we find out that it has only one epithet while the southern cassovary consists two.

The Bennett’s cassowary or dwarf cassowary (casuarius bennetti)- The epithet ‘bennetti’ is named over the great scientist George Bennett. He played an important role by examining the bird and realized or discovered new species of cassowary.

The pygamy cassowary or Casuarius lydekkeri is the fourth species of cassowary, which is now extinct. The bird is not further classified into subspecies. 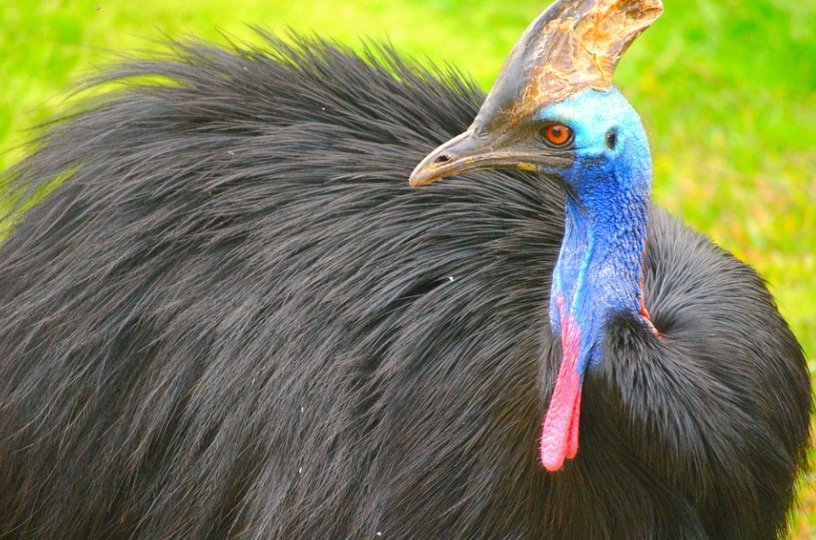 Among all the species of cassowary, the southern cassowary is largest. It is also third largest bird in the world after the emu and ostrich that are also his cousins. The length of the bird is around 40 to 72 inches and it is 75 inch tall.

The cassowary can weigh up to 87 pounds. A horn like structure is found on their head, which has length of 5 to 7 inches. The length of the horn grows with the bird. Thus the casque is often used to estimate the age of a grown bird.

The head of the bird is bright blue colored and its neck is red colored, which also contain two red wattles. A three-toed foot is present at the end of each leg. The legs are long and scaly and a lethal claw occurs in the inner toe.

The length of the claw can be around 4.7 inches. The cassowaries found in Indonesia and Papua New Guinea and in the Aru Islands, Serum. At present, there are 2500 birds in all over the world and their number is still declining.

The nature of southern cassowary is very shy and it loves to live solely. However, it don not chase other cassowaries besides mating season. It feeds on fallen fruits and able to eat such fruits that can be toxic to other animals.

Mushrooms, fungi, and lizards like other small vertebrates are also eaten by cassowary. Unlike raptor, who use their claws to grab their prey, the cassowary do not use their claws for such purposes.

However, it is true that the birds attack on humans but the birds only do this when they are aggressive, frightened and provoked. They can also attack when they defend their eggs or chicks. Sometimes they connect humans with food and attack on them.

The females weigh around swamplands of New Guinea and lowland on the islands of Batanta, Waigeo, Yapen & Salaveati. Their population is around 10,000 to 20,000 worldwide, which is also declining. Their food also include fruit and small animals.

Sometimes, their babies consume the faces of sibling and father and sometimes they also feed on their own faces. The dwarf cassowary has the smallest size among all the species thus it is named as dwarf cassowary.

The cheeks of the bird are of pink color and its neck is blue and red. The habitats of this species are yapen Island, New Guinea, and New Britain. It is found in higher elevations than other species. However the conservation status of the species is least concern but their exact population is not known. 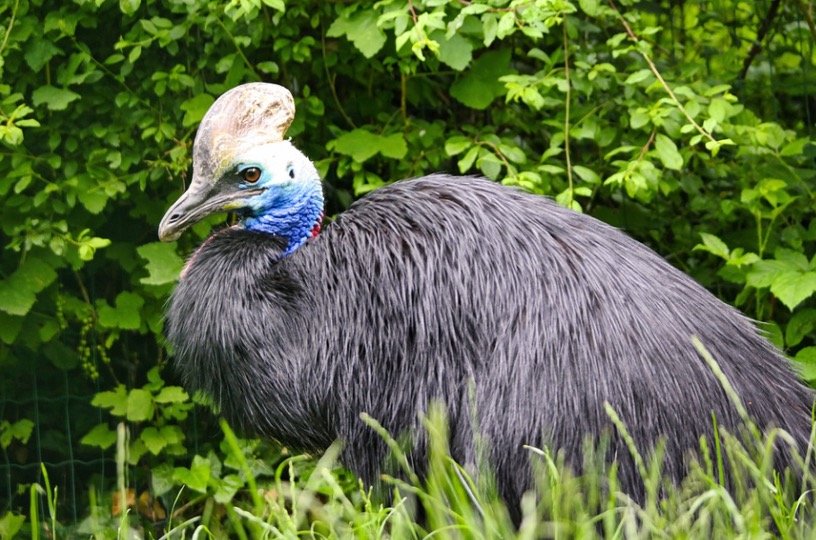 Fruits, berries, fungi and other plant materials re common food items of cassowary. They are also able to consume toxic plants. The poision do not affect them because the food cross their digestive system very quickly. Some reptiles, amphibians, rats, mice, snails and insects are also consumed by cassowaries.

Predators and Threat of Cassowary

Human are the biggest threat for cassowaries their meat is eaten by humans and they also use their feathers thus kill them. Sometimes they are also killed on the highways inadvertently. Dogs and pigs eat their chicks and eggs.

Their eggs were also eaten by pigs. And due to logging and development, people destroy their habitat. Beside this, diseases and natural disasters such as typhoons are also some threatened things for cassowaries.

Reproduction, Babies, and Lifespan of Cassowary

Winter and spring is the mating season of cassowaries. They are territorial organisms and territories were also built by males and use vocalization and inflating throat to court a female, they also dances.

If the male get accepted by female she sit on the ground after which they mate. The females lay green colored egg in her nest. She lays four to six eggs at a time.

The male then chase off the female from his nest. Incubation period is around 47 to 56 days and eggs were incubated by the male. At that time, the female mate with another male and again lay eggs.

She lay more than 20 eggs. The first molt of the babies occur at the age of nine months. Until they live with their father. However, their plumage grow at the age of three years.

Some chicks live with their father for 18 months. Baby cassowary is brown colored and contain black streaks. In the condition of threat on chicks from any potential predator the father become very aggressive.

The birds are also known as “most dangerous birds in the world” and it is also titled as in the Guinness book of world records. They are named as because cassowaries cause more than 200 incidents and 2 human fatalities.

However, cassowary attack rarely.in most incidents, they attack when someone tried to feed them but they can become more dangerous when person falls to the ground. They can attack with their claws and may cause death or severe wounds.